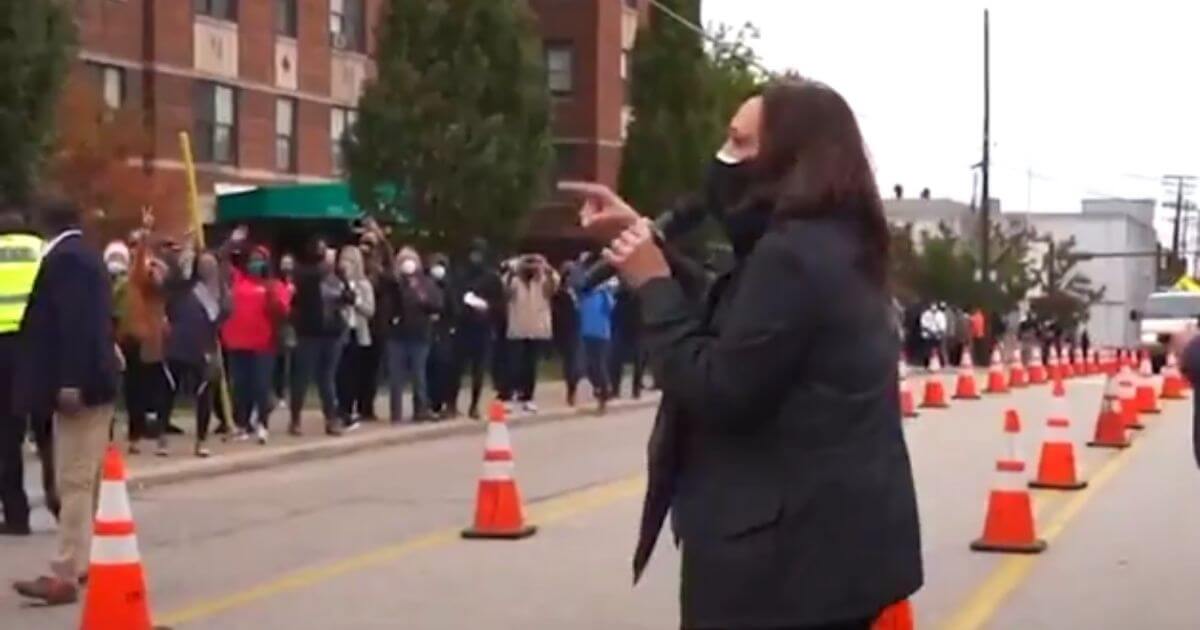 Democratic vice-presidential candidate Kamala Harris stirred concerns of election law violations Saturday as she made a last-minute pitch to voters standing in line to cast their ballots.

The California senator stopped outside the Cuyahoga County Board of Elections in Cleveland, where a long line of voters had formed on the first day of early voting in Ohio, according to Cleveland.com.

“Thank you for voting and voting early,” Harris said. “Your vote is your voice, your voice is your vote. There is so much at stake. Don’t let anyone ever take your power. The power of your voice is so important. You are going to make the difference.”

.@KamalaHarris’ next stop us outside the @cuyahogaboe where there’s still a huge line of people waiting to early vote. pic.twitter.com/tqqUcj1YPL

TRENDING: Brett Favre Breaks Silence On Politics In Professional Sports: “Fans Clearly Do Not Want” It

We the people have the power at the ballot box. Thanks for a great day Ohio! pic.twitter.com/wWsSwTuD8n

“You are going to make the decision about your future, about your family’s future,” Harris continued. “It is through the voice of your vote. And you have the power — the power is with the people. And you know that. That’s why you’re standing in this line today, and I just came to say thank you. Thank you.”

Although the speech was relatively shorn of partisan rhetoric, it drew concerns of electioneering.

Judicial Watch’s Tom Fitton said that Harris had her toes on the figurative line — and perhaps the literal one as well — of violating election laws that make polling places a safe space from political interference.

“If Sen. Harris is within 100 feet of the polling place entrance, than she would be in violation of Ohio law that prohibits such electioneering. (Candidates also are not allowed to be within 10 feet of voters on line, fyi.),” he tweeted.

If Sen. Harris is within 100 feet of the polling place entrance, than she would be in violation of Ohio law that prohibits such electioneering. (Candidates also are not allowed to be within 10 feet of voters on line, fyi.) https://t.co/YimA4MFf32

Others shared Fitton’s view that the law might have been violated.

Here we see self-proclaimed “top cop” @KamalaHarris illegally electioneering. In her time as DA, I wonder how she might’ve prosecuted people of color for committing the same infraction? https://t.co/2jNdTEwOEM

Is this even legal? Electioneering at polling places is at least frowned upon almost everywhere.

Campaigning directly at people in line to vote is Electioneering, which is illegal in most states. It’s possible the line is long enough that she’s far enough away from the polling building, but it’s not a good look.

More than 2,400 voters turned out Saturday at the Cuyahoga County Board of Elections, according to WKSU-FM.

Democrats were not the only ones in Ohio on Saturday. President Donald Trump campaigned in the Buckeye State and voiced optimism that it, and the nation would go his way, according to a White House media pool report.

“We’re going to have a great red wave,” he said.

“It’s going to be a red wave like you’ve never seen before, because people are tired of looking at the anarchists and all of the things taking place in Portland, Chicago, New York, with crime. They’re tired of it.”

“But you’re going to have a red wave the likes of which you haven’t seen. And everybody knows it. And they — you know, I don’t think they’re doing very well. They have no enthusiasm,” he said.

Trump said crowd size alone is showing that his supporters will carry him to victory.

“Look, Obama shows up for a speech, and nobody shows. What did he have yesterday? Thirty-two people showed up? We’ve got 35-, 40,000 people half the time. What’s my smallest crowd been? Twenty thousand, twenty-two thousand people?” Trump added.