The 2020 election cycle has been one for the record books.

It has been nasty beyond all reason, and the media lied to us time and time again, yet suffers no repercussions.

Yet, the post-election season promises to be just as nasty as before, primarily due to the Democrats obvious attempt to steal the election via mass cheating.

They say a picture can be worth a thousand words, so here in one cartoon is exactly what most Americans fear the most now that the election is finally over: 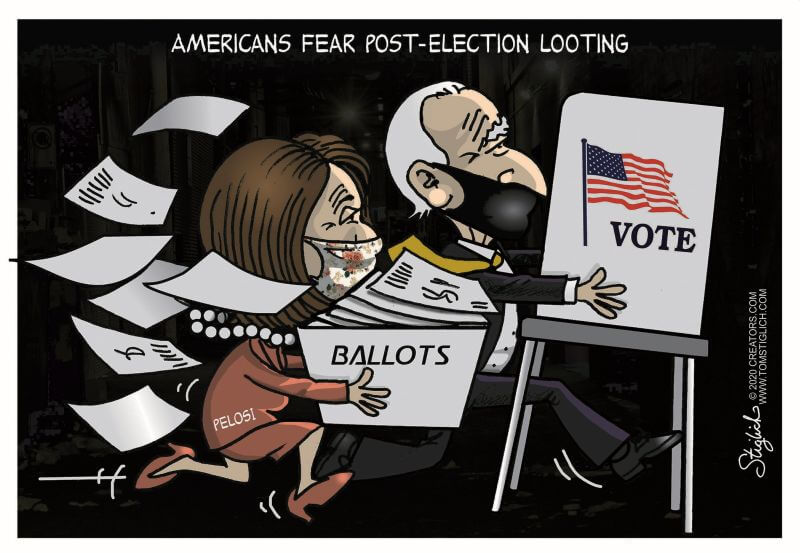 Does that about sum up the whole sordid and frightening thing?

Our greatest post-election fear is that Democrats will steal the election, and get away with it.

Democrats, and many Republicans hate the President so much that they’re willing to sacrifice the entire country to get rid of him.

As the hours pass in the wake of the wild ride America took on Tuesday night, news related to situation in a number of battleground states seems to be changing or breaking by the hour.

According to the Daily Wire, a statement was released by the Antrim County clerk’s office in Michigan in which they admitted that there were “skewed results” in their ballot counting.

Antrim County Clerk Sheryl Guy’s office responded to the situation, which was cause for investigation given that the county is a reliable Republican stronghold.

“Early this morning, the Antrim County Clerk, Sheryl Guy, became aware of apparently skewed results in the Unofficial Election Result tabulations. Since then, the Clerk’s Office has been reviewing the results and the multiple redundancies to search out any possible discrepancies. Staff is currently working with township officials and with Election Source, the company that provides the voting software programs and hardware,” the statement read.

“By this afternoon, we expect to have a clear answer and a clear plan of action addressing any issue,” Guy said. “Until then, we are asking all interested parties to bear with us while we get to the bottom of this.”

Making matters even more interesting — and potentially worse — was a report from local new anchor Joe Gumm, who provided an update on Twitter in which he stated that numerous other counties used the same software that Antrim county used.

“UPDATE: The Antrim County Clerk’s Office in Michigan told me the election program it used (Election Source) had issues and the office is now reviewing 16,047 total votes. The source I spoke with said she believes 33 other counties used the program,” Gumm tweeted.

A Michigan journalist by the name of Zach Gorchow shed even more light on the curious situation, even stating that the corrected results would result in a big jump in vote totals for Trump and Republican Senate candidate John James.

“I just spoke to the Antrim clerk’s office. They are reviewing these numbers, said there are discrepancies. It certainly seems likely the numbers were transposed . Trump and John James will see a ~6,000+ vote gain statewide once this is corrected. This is a staunchly GOP county,” Gorchow tweeted.

On Wednesday afternoon, Michigan was officially called for Biden by virtually all mainstream media outlets, but even if the calls were accurate, relatively speaking the victory would only be by a razor thin margin.

It goes without saying that Trump’s campaign and other candidates’ campaigns should be completely focused on these county-level issues that could possibly end up being a game-changer in the voting totals.

As the Election Winds Down, Remember the Pennsylvania Court Case That Could Tilt It Toward Biden