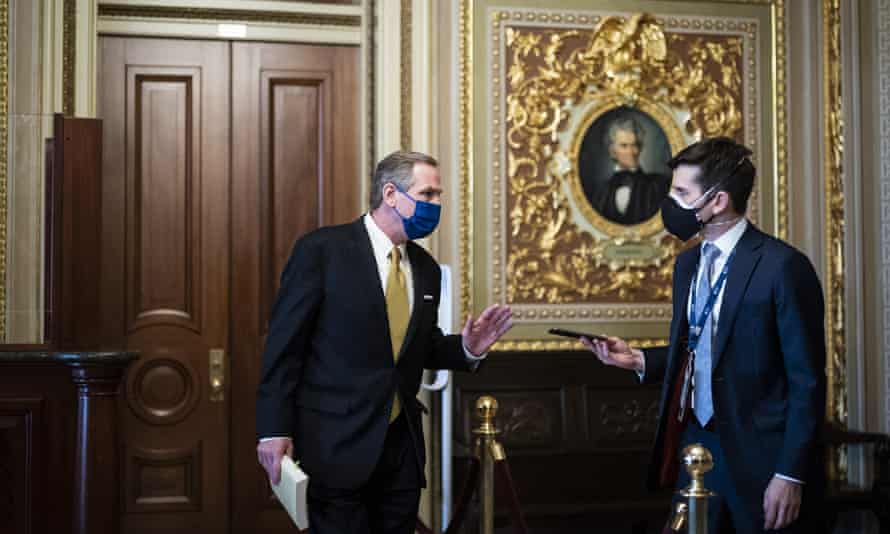 A video in which Joe Biden, Kamala Harris and other Democratic politicians uttered the word “fight” 238 times, according to a count by the MSNBC TV network, was the most bizarre turn yet at Donald Trump’s impeachment trial.

The montage was played by Trump lawyer David Schoen on Friday in an attempt to demonstrate that such language is common in today’s political discourse, and protected by the first amendment to the constitution, so Trump’s call for his supporters to “fight like hell” should not be blamed for the insurrection at the US Capitol.

“You didn’t do anything wrong,” Schoen told senators, many of whom had seen themselves on TV screens inside the chamber. “It’s a word people use, but please stop the hypocrisy.”

He was not wrong that it’s a word people use. Hillary Clinton, who was seen in the video, made Fight Song the theme of her ill-starred 2016 campaign against Trump. The world champion “fighter” is surely Senator Elizabeth Warren, who sprinkles the word in interviews liberally and wrote a book called This Fight is Our Fight.

But what Schoen was also doing was displaying whataboutism in its purest form – a wonder to behold, like a flawless diamond or pristine snow.

Whataboutism is a dodge often seen in rightwing media. If allegations are made against Trump’s connections in Russia, respond: what about Clinton’s emails? If Trump’s family are accused of exploiting their position, respond: what about Joe Biden’s son Hunter? If white supremacists are running riot, respond: what about antifa? It doesn’t matter if the equivalence is false because it’s all about attacking the opponent in order to muddy the waters.

(Speaking of hypocrisy, Schoen accused the impeachment managers of “manipulating video” during his presentation.)

Still, the Trump defence cleared the very low bar set by their Laurel-and-Hardy opening on Tuesday

Still, the Trump defence cleared the very low bar set by their opening Laurel-and-Hardy gambit on Tuesday. On Friday they provided talking points for rightwing media, straws for Republican consciences to clutch at and a boost for Trump’s spirits after some very grim days.

It was not hard to imagine the ex-president at Mar-a-Lago, his luxury estate in Florida, nodding in approval as lawyer Michael van der Veen kicked off in Trumpian style: “The article of impeachment now before the Senate is an unjust and blatantly unconstitutional act of political vengeance. This appalling abuse of the constitution only further divides our nation when we should be trying to come together.”

Van der Veen even described it as a “politically motivated witch-hunt”, a phrase the former president has used even more often than Warren has uttered “fight”.

In a first salvo of whataboutism, Van der Veen played video clips of Jamie Raskin, the lead impeachment manager, and other Democrats objecting to Trump’s victory in the electoral college in 2016. “To litigate questions of election integrity within the system is not incitement to insurrection,” he argued. “It is the democratic system working as founders and lawmakers have designed.”

The lawyer then falsely asserted that one of the first people arrested after the insurrection was a leader of antifa, when that individual denies any such affiliation and indeed antifa is a broad spectrum of far-left, anti-fascist groups, and not an organisation with a leader.

He claimed that Democrats had encouraged “mob violence” during the Trump presidency and played clips accompanied by ominous music.

The impeachment is “about Democrats trying to disqualify their political opposition”, he said, accuse them of indulging “constitutional cancel culture” – another phrase sure to play well on Fox News, Newsmax and the One America News Network.

Later, lawyer Bruce Castor argued that the attack on the Capitol was pre-planned – pipe bombs were planted a day earlier, for example – and so Trump’s fiery speech on 6 January could not have been the cause. However, the president had tweeted in December that the rally “will be wild”, and the prosecutors have shown Trump spent months laying the groundwork.

Castor also misnamed the Georgia secretary of state, Brad Raffensperger, referring instead to the NFL star Ben Roethlisberger, and quibbled over the definition of “insurrection” . After two and a half hours, the defence case rested. They had put up a fight, of sorts, but it was unlikely to be remembered alongside Winston Churchill’s “fight them on the beaches”.

Michael Beschloss, a presidential historian, tweeted drily: “Of all impeachment defense speeches in American history, Castor’s was the most recent.”

In A World of Manufactured Crises, It Isn’t So Much About What You See As It Is About What They Say You Saw