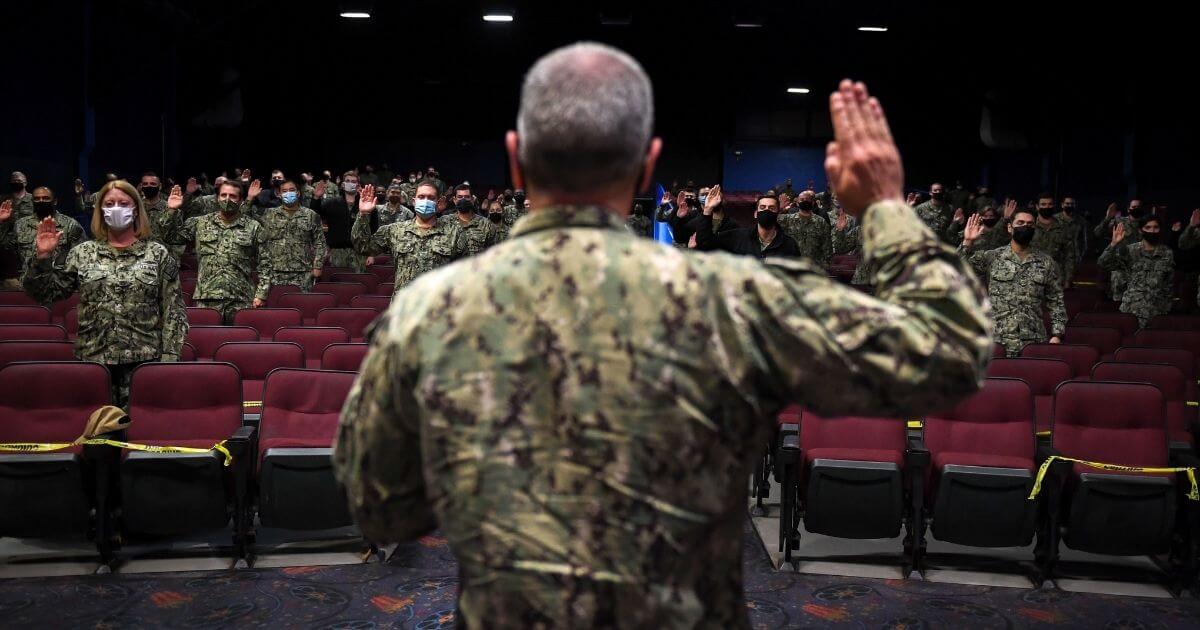 The false narrative about the United States being “systemically racist” has been gaining ground in many areas of American culture. Now, it has fully made its way into the U.S. Navy.

In June, the Navy created Task Force One Navy in order to “identify and eliminate individual and systemic racism within our force,” according to a news release.

The service has now revealed the findings of this task force in a report, and it includes a pledge that task force members were forced to take.

It reads like something right out of a pamphlet at the Democratic National Convention.

The first few lines of the pledge are perfectly acceptable. For example, members must promise to “be actively inclusive in the public and private spheres where I live and work.”

That is a noble goal. We all should want to be inclusive of people who may be different from us.

However, the pledge then takes things a step further.

“I pledge to advocate for and acknowledge all lived experiences and intersectional identities of every Sailor in the Navy,” it says.

Task Force One Navy by The Western Journal on Scribd

In this line, the pledge crosses over from the noble goal of inclusion into the nasty world of identity politics.

The first half of this line is not particularly worrisome. It is certainly true that people of different races may have different experiences, and there is no problem with acknowledging those.

The issue arises when members are forced to recognize the “intersectional identities” of their fellow sailors. That requirement itself is inherently racist.

By bringing racial identity to the forefront of the conversation, the Navy is deepening the divide between Americans of all races. The entire goal of the civil rights movement was to eliminate such lines of thinking.

“I have a dream that my four little children will one day live in a nation where they will not be judged by the color of their skin but by the content of their character,” the Rev. Martin Luther King Jr. said in his famous “I Have a Dream” speech at the March on Washington in 1963.

Now, some people will say I am arguing for “colorblindness,” which is not the case. I know that heritage is extremely important, and it is not to be ignored. Our race is certainly a part of who we are, and it is something in which we can take pride.

Yet when the Navy uses terms such as “intersectional identity,” it implies that we should treat people differently based on their ethnic groups. It goes beyond pride in heritage and crosses over into segregation.

The basic notion on the left has become, “The more minority groups one is in, the harder his or her life must be.” For example, if someone is a black woman, she must have faced an inordinate amount of discrimination compared to a white man.

Even if this is true, the solution is not to give these people special treatment, which only further separates them from other American citizens. Instead, they should be given the same rights as any other American.

The truth, of course, is that both black women and white men already have the same rights in America. They may face different cultural challenges, but they are perfectly equal under the law.

If politicians really wanted unity, they would admit that truth. Instead, they use identity politics for their own gain, as former Democratic presidential candidate Tulsi Gabbard noted.

“The identity politics that we are seeing continue to be used by people in both parties is escalating,” she told Fox Sports Radio.

“It’s really dangerous because it’s dividing our country and dividing people whether it’s based on race, ethnicity, religion, or orientation. … Politicians are playing these identity politics cards, not because they care about the problems that folks are experiencing in their lives, but really to say, ‘Hey vote for me because I’m this,’ or, ‘We share the same label and those guys with THAT label are the bad guys.’”

Without a doubt, racism has played a large role in American history, and many of its consequences can still be seen today.

At the same time, the way to solve past racism is not with more racism.

Acknowledging the struggles that can come with being a racial minority in America, or particularly in the Navy, is perfectly fine. Advocating for “intersectional identities,” which implies that minorities should use their status as a means for special treatment, is not.

Unity is needed everywhere in America, but especially in the armed forces. Pledges like this one threaten to tear apart the very people who protect our freedom.