Sen. Susan Collins Faces Wrath Of Her Home State As They Consider Censure Over Her Conviction Vote 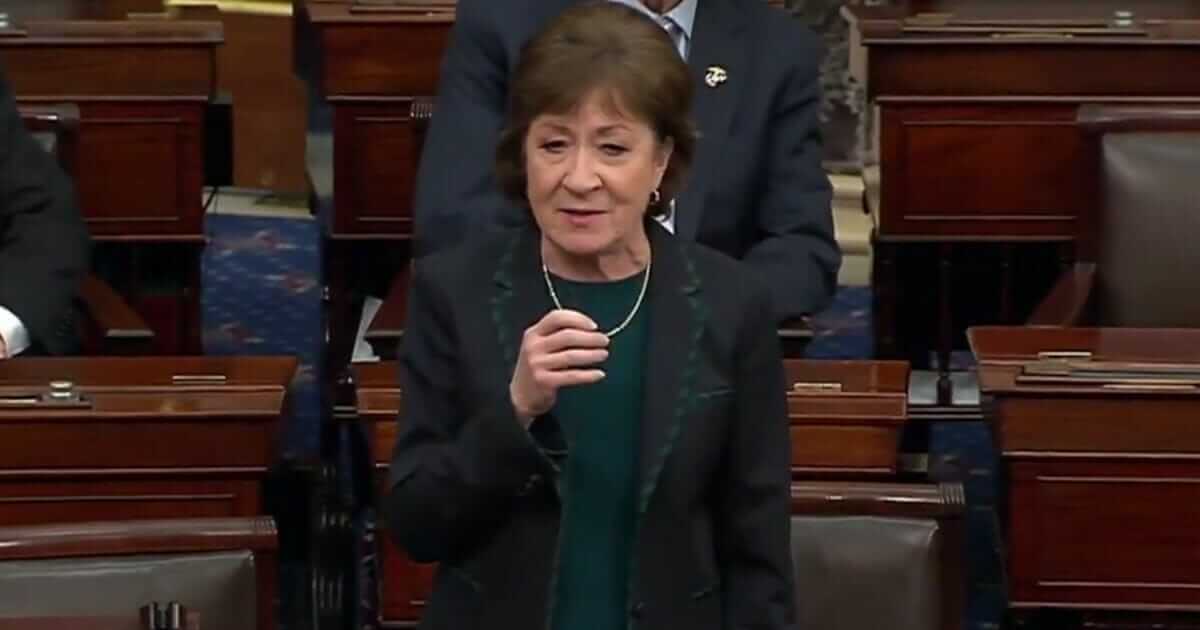 It’s amazing how many Republican senators shot themselves in the foot in the latest Democrat-led impeachment sham.

According to Newsmax, Sen. Susan Collins of Maine is the latest Republican senator who will likely be censured in her home state’s Republican party for voting to convict former President Donald Trump alongside Senate Democrats.

The process to discuss a possible censure in Maine was fast, just like it was with other GOP senators who voted to convict Trump. County GOP chairs met on Monday to begin discussing the matter, as Maine’s Republican Party Executive Director Jason Savage indicated.

The topic of the meeting will revolve around how the state’s GOP leadership will respond and react to Collins’ pro-conviction vote, which, like in other states, flies firmly in the face of what a majority of Republican voters wanted to see.

A series of emails between GOP party officials were obtained by the Bangor Daily News, which among other things, indicated that the officials could move forward with a censure vote before the end of February.

Maine GOP Chair Demi Kouzounas emailed Republican colleagues in the state over the weekend, writing “many of you are upset after what happened today as are we,” adding that party members need “to be prepared for an emergency state committee meeting in the near future.”

Hinting at how strongly state Republicans feel about Collins’ actions was the fact that they already obtained the signatures and checked off the technical requirements needed to hold an emergency meeting, which requires consent from “17 state committee members representing six or more counties.”

“Based on the responses that I got in Waldo County [after the vote] and the people on my mailing list, I think that the people themselves are demanding that something be done to send a message,” said Waldo County’s Katrina Smith.

Collins, who has always had a rocky relationship with Mr. Trump, joined a small contingent of Senate Republicans in ripping the former president on the Senate floor shortly after he was acquitted in a 57-43 vote.

“My vote in this trial stems from my own duty to defend the Constitution of the United States,” Collins said in an effort to defend her vote. “The abuse of power and betrayal of his oath by President Trump meets the constitutional standard of high crimes and misdemeanors.”

Collins will likely join the ranks of several Senate Republicans who voted in favor of convicting the 45th president, including Sen. Bill Cassidy, who was almost immediately censured in his home state of Louisiana. Sen. Pat Toomey of Pennsylvania was censured by several counties in his state and North Carolina Sen. Richard Burr was censured on Monday by Republican officials in his state.

Any of these senators with the hopes of running for reelection might think that their constituents will forget about it by the time their next election comes around, but I have a feeling there will be plenty of campaign aides from their primary challengers to keep the memory alive.

"Impeach Joe Biden for Stealing the Presidency...Trump Will Lead Us" to Sweeping Victories in 2022 and 2024 Steve Bannon Tells Boston