‘Time to Send the Troops Home’ 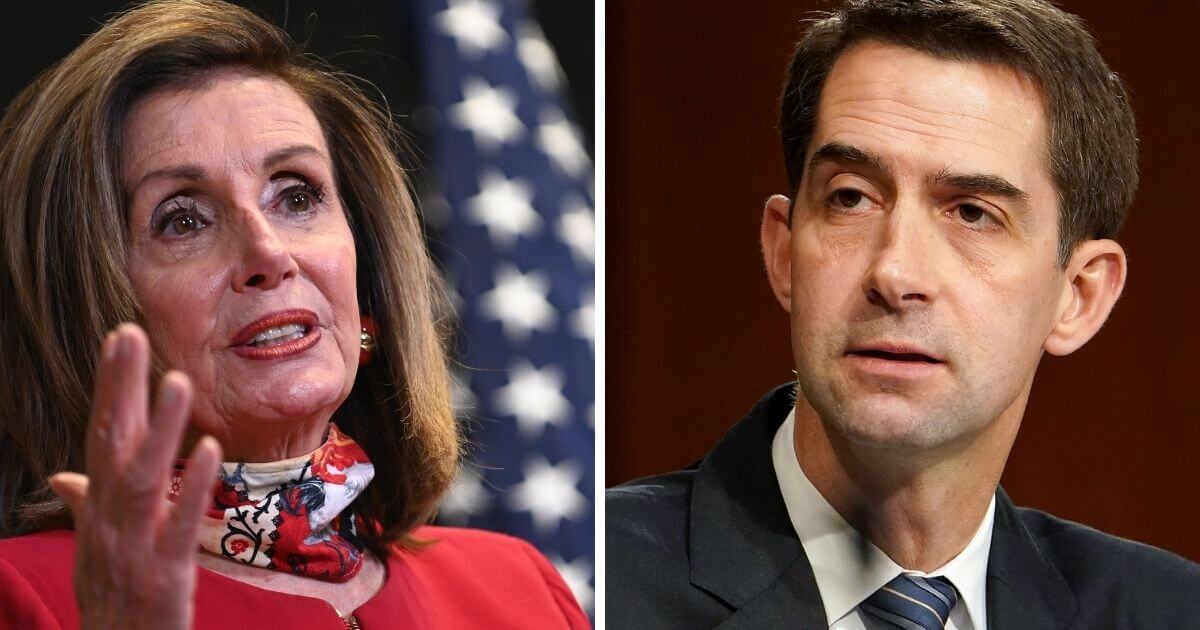 Tom Cotton has had it.

As a veteran who saw life-threatening combat in Iraq and Afghanistan before the political warfare of Washingon, the Arkansas senator has a perspective on today’s militarization of the District of Columbia that few Americans can share.

But in a “Fox & Friends” interview on Tuesday, he no doubt spoke for millions who are tired of seeing Washington, D.C., being patrolled by armed soldiers like some backwater banana republic.

And the Republican’s message for House Speaker Nancy Pelosi is crystal clear:

“It is time to send the troops home,” Cotton told the “Fox & Friends” co-hosts.

TRENDING: This Is the ‘Abhorrent’ Message Gina Carano Was Fired for: Turns Out She Was Right

Check out the interview here:

Cotton, a decorated Army captain who served combat tours in both Afghanistan and Iraq, took particular note of reports that President Joe Biden’s White House, through its National Security Council, had asked the Defense Department to develop a plan to keep National Guard troops in the nation’s capital through the autumn.

“I’m not aware of any – any – threat to justify a continued presence today around the Capitol, much less into the fall,” Cotton said.

“I think Nancy Pelosi will have a lot of questions to answer about what she knew leading up to the riot on Jan. 6. There was a clear failure by the security leaders on Capitol Hill to prepare for Jan. 6,” he said.

He also cited the overwhelming vote of Capitol Police officers, recorded by their union, that found almost no confidence in the police agency’s leadership. (According to NPR, 657 of the force’s 1,050 unionized officers took part in the vote, which started last week.)

“The officers of the Capitol Police performed bravely, but they’re right to have no confidence in their leadership. That doesn’t mean, though, that we should turn the Capitol into an armed fortress or camp for thousands of soldiers. It means we should use common sense and assess the threats that we face and respond accordingly.”

He said if conditions change — like if Biden visits Capitol Hill to deliver a State of the Union address — security could be adjusted. But at the moment, it appears unnecessary.

“But Congress isn’t even in session this week,” Cotton said. “Yet we have thousands of troops guarding the Capitol where congressmen and senators and their staff work at a time when the security threats simply do not justify it, at least to my knowledge.

“If they do, Nancy Pelosi needs to come forth and explain why they do.”

Cotton is far from alone, of course. On Monday, some of his Republican colleagues in the House of Representatives took to “Fox & Friends” to demand answers from Pelosi about the continued presence of about 5,000 National Guard soldiers.

“Myself and several of my colleagues have asked Nancy Pelosi for a briefing as to ‘Why do we need these troops here?’ And we have received zero information, zero,” Michigan Rep. Lisa McClain said.

It’s not just that Pelosi hasn’t told her fellow lawmakers. She has yet to explain to the American people why the Democratic Party insists on keeping the capital under what amounts to a military occupation – however benign it might be.

She and her colleagues also haven’t seen fit to explain to the American people – the ultimate sovereign in this country – exactly what the necessity is.

On Thursday, California Rep. Ted Lieu, one of the more hapless members of Pelosi’s nine-member posse of impeachment managers, said on the floor of the Senate that the National Guard was necessary in the District because former President Donald Trump still had not fully recanted his publicly stated belief that he should have been the true winner of the 2020 vote.

“‘The election was not stolen.’ He still hasn’t said that sentence,” Lieu said during Democrats’ closing arguments in the impeachment trial. “That is why National Guard troops in full body armor still patrol outside.”

OK. So in the Democrats’ fevered imaginations, Trump is some kind of Emmanuel Goldstein for the Biden administration, a monstrous figure whose threat will be ever-present until he publicly renounces his belief that Democrats lied, cheated and stole their way to the White House.

Well, if the idea that a political candidate refused to accept a presidential election loss was grounds for militarizing the nation’s capital, there would have been troops in the street from the day of Trump’s inauguration in 2017 until today.

Democrat Hillary Clinton never accepted her 2016 defeat at Trump’s hands – and as recently as last month was peddling her tired lie that Trump is some kind of puppet in the hands of Russian President Vladimir Putin.

It’s a fair statement to say that Trump and his 74 million voters have infinitely better reason to be furious at the 2020 outcome than Hillary and her entitled minions ever did about the 2016 race.

After watching the president attacked relentlessly over three hugely successful years, the victim of a Russian “collusion” hoax as well as a sham impeachment that was forgotten almost immediately after the trial reached its foregone conclusion, they watched as Trump was blamed for a pandemic that started in communist China and has spread misery around the world.

Then they watched a hideously biased mainstream media prop up the Biden campaign and the lords of social media actually squelch a blockbuster story about alleged corruption in the Biden family.

And now, after months of post-election frustration culminated in the admittedly appalling Jan. 6 incursion into the nation’s Capitol, they’re watching as Democrats are effectively turning the nation’s capital city into an armed camp.

As a reason, Democrats offer only the shadowy possibility that Trump and his followers pose some kind of threat to the safety of the republic. But as usual with the left, exactly the opposite is true.

With Democrats holding majorities in both houses of Congress – however slim – and with a Democrat in the White House – however doddering and almost certainly corrupt he might be – the true danger to the Republic is striding in the offices and corridors of power in Washington, among Democrats who spent the Trump presidency proving they care more about vindictive politics and their own power than governance that actually helps the country.

Unless Democrats can come up with a legitimate reason for keeping armed soldiers on the streets of the capital, Cotton won’t be the only one who will have had it with the evident liberal fetish for the trappings of fascism.

The country will have had it, too.

US, Other Wealthy Nations Should 'Use Regulation' to Move to '100% Synthetic Beef'