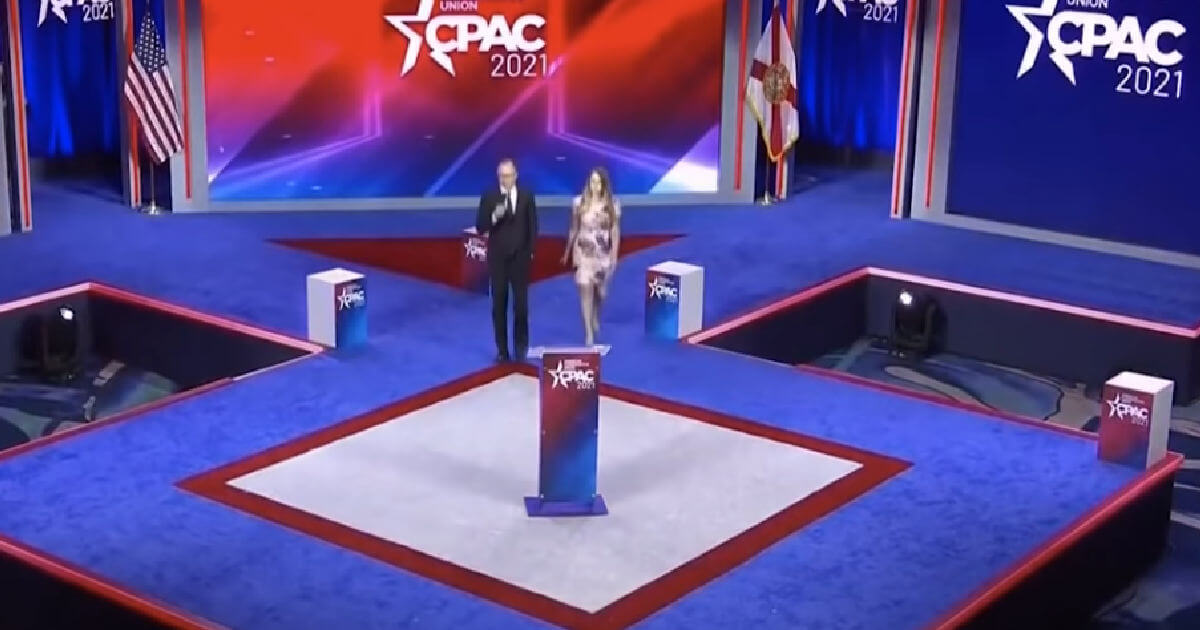 CPAC came under attack this week after Democrats ran a narrative that the stage was purposefully shaped to mirror the pagan symbol used by the Nazi party, the Othala rune. Hyatt – who hosted the conference – joined the Democrats to blame the CPAC organizers for the blatant antisemitism. But, like all Democrat narratives, there’s a catch.

The company responsible for the design of the stage for CPAC last weekend says the organizers had nothing to do with creating the highly criticized stage. The Forward reports that in an exclusive with the company, Design Foundry, the company claimed to have “had no idea that the design resembled any symbol, nor was there any intention to create something that did.”

Not surprisingly, CPAC says the company will be off future lists for design ideas. The company defended their design to Forward, saying that the design was “intended to provide the best use of space, given the constraints of the ballroom and social distancing requirements.”

The contract between the American Conservative Union (ACU) and Design Foundry states, “The designs, rendering, drawings, specifications, materials and other documents used or created as part of the proposal are owned by Design Foundry.” Although ACU did approve the stage design, the contract prohibits ACU from changing the design or taking apart the stage.

“ACU and CPAC have no interest in promoting antisemitism from our stage, ” Communications Director for ACU and CPAC Ian Walters said to Forward, “whether it’s what happens on the stage or the design of the stage itself.” Walters added, “It’s clear that the company we retained designed a stage that has become an unwelcome distraction. As a result, we will not be using that company’s services going forward at future events.”

Not only did the organizers of the event leave the design up to Design Foundry, but now the National Pulse is reporting that the company is a regular design company used by Biden and MSNBC. The report states, “Specifically, it provided similar services for the 2018 Biden Cancer Summit, which featured President Biden as a speaker, and the 70th anniversary of MSNBC’s Meet the Press in 2017, a 2017 summit for New America – and organization led by Obama administration alumni.”

Not to mention that only 1.8% of the almost $8,000 donated to federal elections from Design Foundry employees were given to Republicans. This means the company responsible for the design stage at the CPAC has a Democrat donation rate of 98%.

After running the “Republicans are racist antisemites” story all weekend, be watching for the number of mainstream media companies that run the story that the stage designer was a Biden/Obama loving Democrat company who takes full credit for the stage design.

I bet Brian Stelter will be all over this, right after he covers Gov. Cuomo’s sexual assault allegations and the governor’s small issue of being responsible for thousands of preventable senior deaths. Or maybe he’ll be too busy suing Hasbro for using his likeness for their new gender-neutral potato.

Fauci Moves the Goalposts Again, Says Before Opening Up, Schools Must Update Their Ventilation Systems