Jen Psaki Tries to Laugh Off Question from Fox’s Peter Doocy, He Doesn’t Let Her Get Away with It 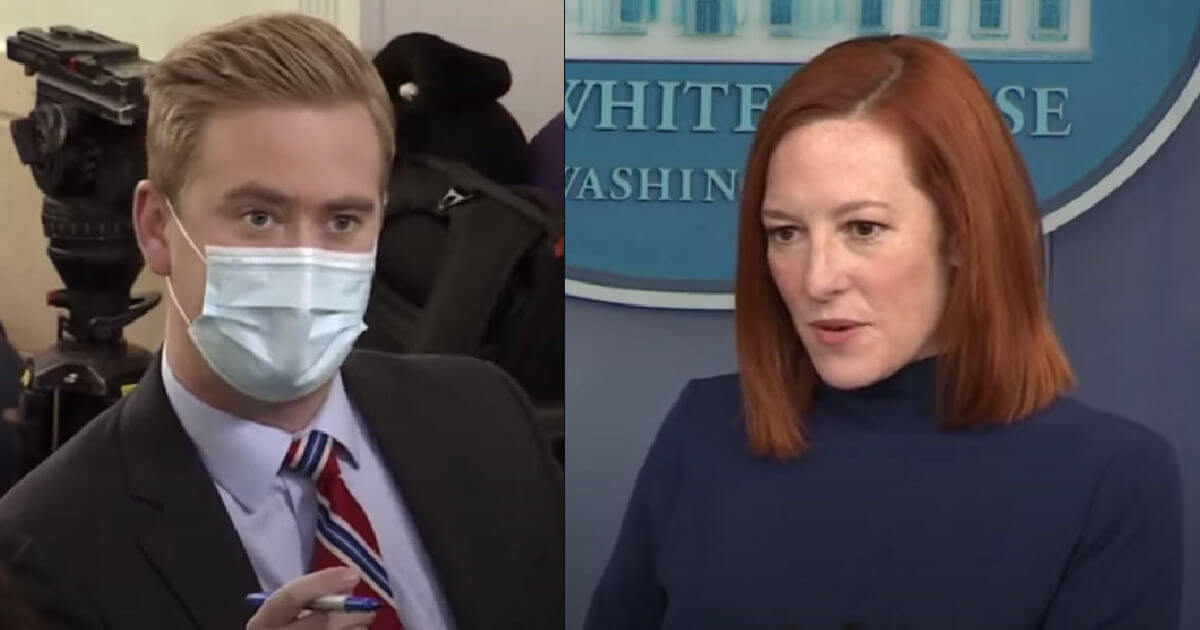 White House press secretary Jen Psaki tried to laugh off a question from Fox News reporter Peter Doocy about school closures and child migrant detention centers which are full during Wednesday’s media briefing, but he didn’t let her get away with it.

The burgeoning crisis at the country’s southern border with Mexico, which was created over the last two months by bad policy from Democrats, is coming to a head. Unaccompanied children are in “cages” at migrant detention centers in greater numbers than ever before.

This is occurring as leftist teachers unions across the country are holding districts hostage and those in the White House have no apparent interest in getting American kids back to any sense of normalcy while they cater to the every need of those here illegally.

Thankfully, Doocy has emerged in recent weeks as the lone force holding Psaki, and by proxy President Joe Biden, accountable.

He came to Wednesday’s news briefing armed with questions on the disparity between American and illegal migrant kids, and demanded answers.

“You’ve been telling migrants from right there, for a month now … that now is not the time to come, but they are coming in bigger numbers every day. So, do you have a messaging problem?” Doocy asked the ineffectual and inept Psaki.

“In the last administration we had a morality problem and children were being pulled from the arms of their parents, and kids were being sent back on a treacherous journey,” Psaki said.

The press secretary further added that the Biden administration is seeking a “humane” policy with regard to illegal border crossings by minors, which includes feeding, housing and educating them.

“What we’re talking about here are unaccompanied children and what our focus is on is ensuring there are safe places for these kids to go to go where they have access to educational resources,” she said. Naturally, those kids aren’t kids in “cages” now that Trump is no longer president.

In that vein, Doocy grilled Psaki.

“Well since the last administration is gone — tomorrow is 50 days of Biden — there are migrants showing up wearing T-shirts that say, ‘Biden, please let us in.’ And candidate Biden is the one who said, ‘I would end this notion for the first time in history that people seeking asylum have to be in squalor on the other side of the river.’ Why doesn’t he come out and just say, ‘Now is not the time?’”

Psaki then made mention of “CDC guidelines,” which “allow for more children to be housed safely in these facilities.”

“So we’re looking at every option possible to help address the challenges we’re facing at the border,” she said.

About those guidelines, Doocy wasn’t in the mood for deflections. He pressed Psaki about why those guidelines are being ignored for the country’s embattled school children — many of whom have now spent a full calendar year isolated at home.

Doocy pointed out that very few schools are operating at full capacity and asked, “Have the Border Patrol unions and the HHS unions been easier to work with than the teachers’ unions?”

Psaki appeared stunned, as she so often does when asked a substantive question. After some back and forth with the pair comparing American schools with child migrant detention centers and the education opportunities in each of them, Paski deflected and laughed.

“I think that’s a little bit of mixing different circumstances. I would say that,” she said with a smile.

“It’s children all in tight quarters … that’s not funny,” he said.

Doocy appears to be the only person in the White House briefing room these days doing work on behalf of the American people and the country’s embattled youth. Biden has created a humanitarian crisis at the once-secured border. Psaki, accustomed to the Biden-friendly media, apparently thought a laugh would get her out of a tight situation.

She found out the hard way that negative reporting about the border calamity isn’t going to go away with a smile and a deflection — not when she’s dealing with Doocy. American kids need to get back in school. As much as we’d all like to offer educational opportunities for kids across the globe, our own kids should come first.

Right now, American kids are being cut off from the world while Biden’s immigration policies are attracting waves of minors from Mexico and other countries — and those kids are getting special treatment and apparently top-notch educations.