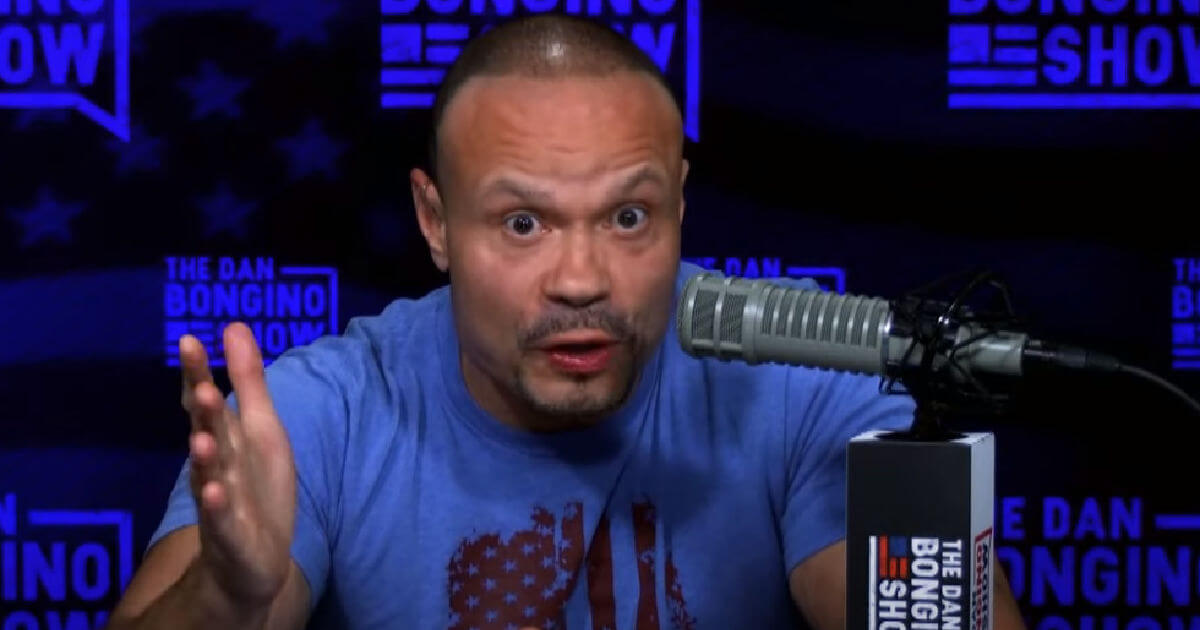 But all he was really doing was showing how weak the current Democratic Party really is.

And it only took a statement of logic and morality for Bongino to make that clear.

The two men clashed while Bongino was testifying at the invitation of Republican representatives before a House Judiciary Committee hearing on police brutality, which Politico described as a move in the process of passing the national police reform bill Democrats introduced on Monday.

Like most lawmakers, Jeffries is a lawyer, and obviously has a lawyer’s faith that his intelligence is superior to those without a law degree.

This moment from @RepJeffries going after @dbongino is absurd. He repeatedly brings up white terrorists and their skin color and when pressed by Dan on why he’s making it racial, Jeffries says “Black Lives Matter.”

Dan has to remind him: “I arrested those people, you did not.” pic.twitter.com/lG6pENHJ9q

Jeffries used his time with Bongino to ask a series of questions about the racial identity of well-known mass murderers — James Holmes, the gunman who killed 12 in a movie theater in Aurora, Colorado in 2012; Dylann Roof, the avowed racist who murdered nine black churchgoers in Charleston, South Carolina in 2015; and Patrick Crusius, who was motivated by anti-Hispanic sentiments when he allegedly murdered 23 at a Walmart in El Paso, Texas.

In each case, the gunman was white, and arrested alive by police.

The implication, of course, is that American law enforcement will go easy on a mass murderer as long as he’s Caucasian.

It makes no sense to anyone who understands how police work, or even how human nature works — but Jeffries was playing to a Democratic audience.

“Because black lives matter, sir,” Jeffries said, with a sneering emphasis on the honorific that made it come off more like a curse.

That’s as far as he got before Jeffries cut him off, but the message was delivered loud and clear.

Who elected this idiot @RepJeffries what is he trying to say? White mass murders get preferential treatment? Did any of these people not get arrested? #DefundThePolice and we will all be heavily armed except the law abiding citizens in his district. @dbongino GREAT JOB! https://t.co/5ee4s8kXI1

The problem for the Black Lives Matter crowd is that the movement explicitly puts a higher value on one human life than another on the basis of simple skin tone, and then only seems concerned with lives that are lost due to police actions.

The spark for the latest round of outrage, of course, was the death of George Floyd in Minneapolis in May, but the arguments haven’t changed since Black Lives Matter became a political force after the death of Michael Brown, an 18-year-old black man who was killed while attacking a police officer in Ferguson, Missouri, in 2014.

Black Lives Matter activists don’t seem concerned about the appalling rate of black-on-black killings in the United States every year — more than half of all homicide victims are black, as National Review’s Barry Latzer pointed out in December, and the perpetrators are black in the vast majority of those cases.

Considering black Americans make up only about 13 percent of the U.S. population as a whole, it’s a staggering figure.

(The thousands of black babies destroyed in their mother’s womb every year thanks to the regime of legalized abortion Democrats prize above all other causes never even merit a mention from the activists, of course.)

No, Black Lives Matter hypocrites are concerned only with deaths that make up a vanishingly small percentage of the black population — yet get virtually all of the attention of the mainstream media allot — because they can be used to smear President Donald Trump and his chances of re-election.

That elected Democrats — like Jeffries — and Black Lives Matter activists are capable of that kind of moral obtuseness is ultimately between them and God.

They can only use it to inflict considerable harm on the political system if their listeners and fellow Americans — black and white — are willing to allow that hypocrisy to go unchallenged.

Bongino was unwilling to do that — and he let Jeffries know it.

“All lives matter,” he said.

As national outrage over the Floyd case fades, it’s a good bet it’s going to replace by a different kind of outrage — where everyday American citizens see the extent activists used a man’s death to wreak havoc on American cities and try to undermine the American system of government.

If Democrats want to be the party of riots and destruction and Black Lives Matter, they’re more than welcome.

They’ll pay for it in the polls come November, and they’ll deserve it.

Illegals Are Robbing Houses, Getting Into Car Chases Daily

Superhero 76-Year-Old Asian Woman Leaves Attacker Bloodied, Hospitalized... "She Wanted More of the Guy" Police Had to "Hold Her Back," Starts GoFundMe