Gunman Dead After Ambush Against 2 Cops Backfires in Violent Manner 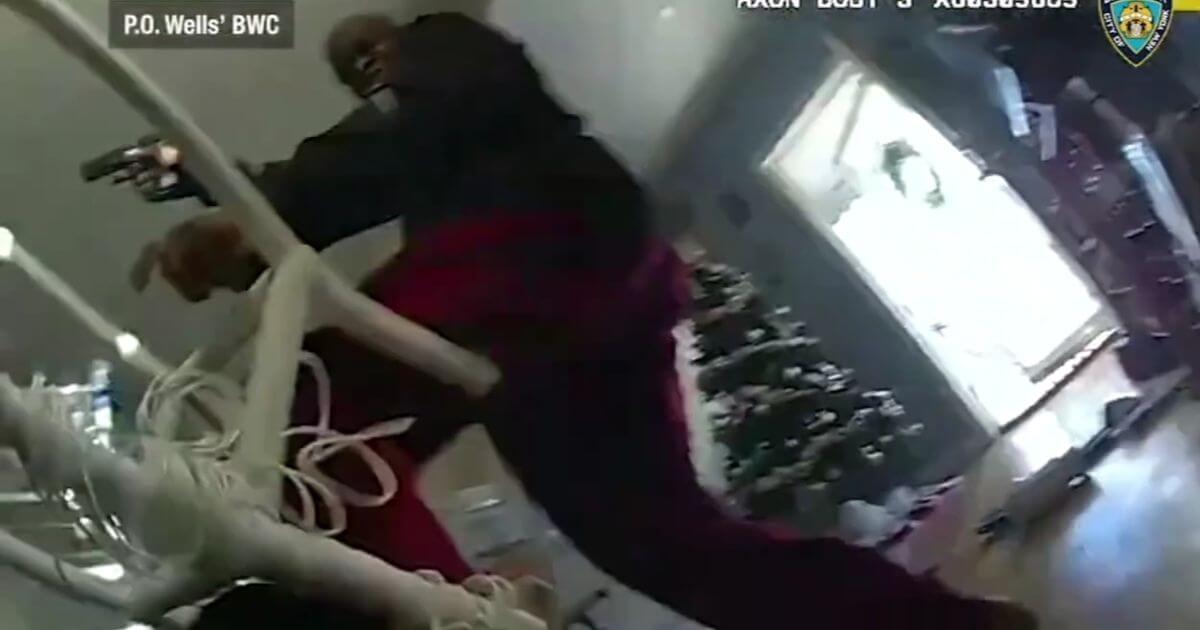 This punk may have gotten the drop on two cops, but they won the gunfight.

According to WABC-TV, body camera footage from two New York Police Department officers on Nov. 24, 2020, shows a domestic violence suspect entering a home and firing his weapon at the cops and his alleged victim.

The suspect, later identified as 41-year-old Rondell Goppy, wounded officers Joseph Murphy and Christopher Wells, but both remained able to return fire. As a result, the attempted ambush collapsed in a matter of seconds.

The incident occurred after Goppy’s alleged victim reported him to the NYPD’s 105th Precinct for domestic violence.

The two officers then led the woman back to her home to recover her belongings when Goppy arrived at the scene and opened fire.

Goppy fired at his intended victims 11 times, but this quickly turned out to be a bad idea.

Wells and Murphy returned fire 24 times, striking and killing the suspect. Before bringing the gunman down, Wells was struck in the thigh and Murphy received gunshot wounds to both of his hands.

“They saved that woman’s life,” New York City Mayor Bill de Blasio said following the incident, according to WABC. “I want to be crystal clear. Because these officers were there, that woman is alive.”

This instance speaks volumes about how important the acuity and expertise of our men and women in blue is for community safety.

Although the gunman may have had the element of surprise, his ambush fell apart in a matter of seconds because of the officers’ ability to respond quickly and efficiently. Their lives — and, in many cases, the lives of others — depend on service weapons.

Because of the two officers’ swift rush to action, the alleged domestic violence victim suffered no gunshot wounds and was able to run for cover.

Murphy and Wells were released from Jamaica Hospital on Thanksgiving morning, welcomed by the sound of bagpipes and the applause of other officers.

“There is no surprise here today what we have to be thankful for,” NYPD Commissioner Dermot Shea said.

After being shot in the line of duty protecting a domestic-violence victim, Officers Wells & Murphy leave the hospital today to continue their recoveries at home with loved ones.

Wishing these heroic officers a speedy recovery & a happy Thanksgiving.

So many times, police officers are given a bad rap for isolated incidents that the establishment media reports breathlessly.

The popular narrative would lead us to believe all officers are purposelessly brutal, pointing to the cases which spawned summer-long protests and riots across the nation last year.

But then we hear stories like these — stories in which officers make a positive difference in the lives of others and in the general wellbeing of their communities — and the narrative changes.

If not for the men and women who risk their lives every day to serve and protect, the world would be a far more dangerous place.

'Terrible Conditions for the Children'