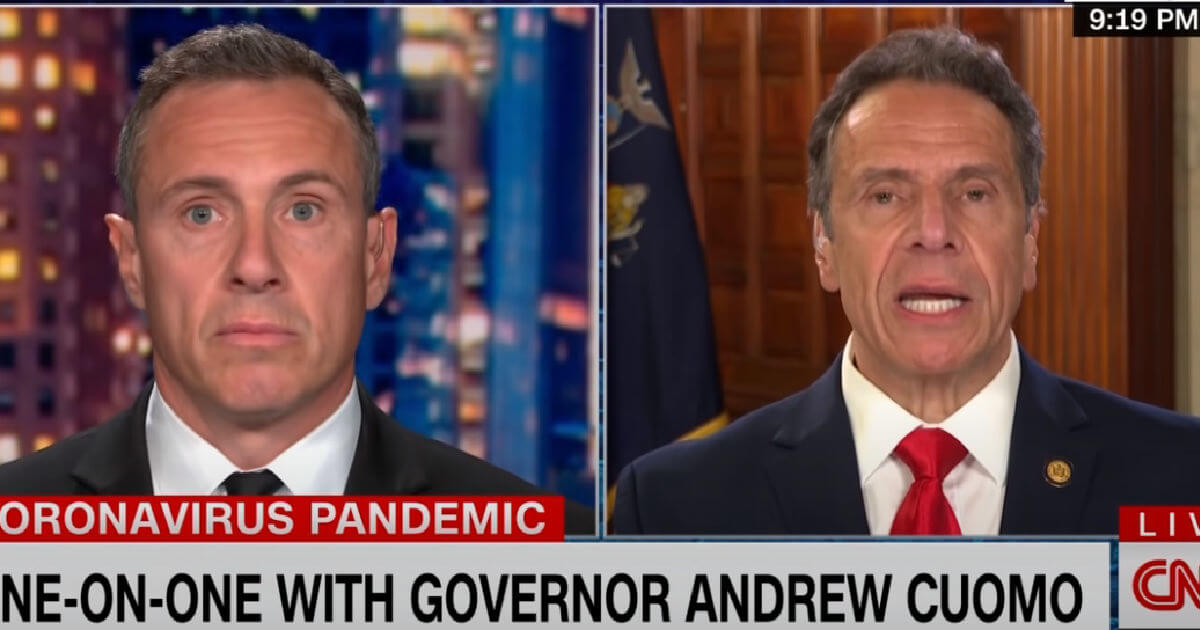 CNN is getting hammered again for the media company’s “lack of ethics,” the Daily Mail reports. A report claimed that Chris Cuomo received special coronavirus testing not made available to the public allegedly provided by his brother, Gov. Andrew Cuomo.

When the Democrat party wants to destroy one of their golden calves, they make sure to melt it down to an unrecognizable version. Make no mistake, Andrew Cuomo deserves everything that is happening to him. The bad publicity, the investigations into his nursing home policies, and sexual abuse allegations, he deserves it all. But this is a Democrat hit job.

Conservatives called Andrew Cuomo out for his nursing home policy that instructed New York-funded nursing homes – which were understaffed and under-supplied – to take in patients from the hospital who were still Covid positive. The investigations are also looking into the possibility that the Cuomo administration fudged the number of deaths resulting from his policies. Not a peep – minus a couple of give-me questions – was ever made to the Governor – who most “journalists” labeled “the love Gov.”

Now the Democrats are sacrificing Andrew Cuomo – making it easier for Kamala Harris to win the nomination in 2024 – and his brother Chris Cuomo with accusations that the Chris Cuomo used his powerful brother’s connections to obtain “priority COVID-19 tests before thousands of others when the state was the epicenter of the pandemic last year.”

CNN’s response to the scandal that Chris Cuomo was receiving tests when no one else could was asinine. Could you imagine if any conservative governor was caught giving their famous brother COVID-19 tests in the middle of a pandemic, specifically while test supplies were deemed critically low?

Of course, you could; the media would lose their minds. CNN would air wall to wall coverage, postering how selfish and unbelievably unAmerican it is to take supplies in short demand and allocate them for their family members. But not when one of their own stands accused.

Matt Dornic, the head of strategic communications for CNN, responded to the scandal, saying, ” We generally do not get involved in the medical decisions of our employees. However, it is not surprising in the earliest days of a once-in-a-century global pandemic, when Chris was showing symptoms and was concerned about possible spread, he turned to anyone he could for advice and assistance, as any human being would.”

According to the report, not only did the family of Gov. Cuomo get taken out of their nursing homes, given priority to testing, but that the top state doctor was the one that personally administered the tests to Cuomo’s family. Here is CNN taking up for a man they allowed to come on their shows, promote his book, and tout his masterful Covid policies. All of which we know were inflated deadly lies.

The Governor’s spokesman claims the family received the priority testing due to contact tracing. The Governor’s office didn’t seem to care that Andrew’s brother was seen traveling all around the Hamptons even after testing positive. The same CNN from earlier also thought it was a wide move to create an “emerging from the basement quarantine,” painting the false narrative that Cuomo followed the CDC recommendations, completely ignoring the circling pictures and the video of an altercation of him and a Hampton bicyclist.

I guess the jokes on you if you are still watching CNN and consider their commentary to be anything more than leftist propaganda.