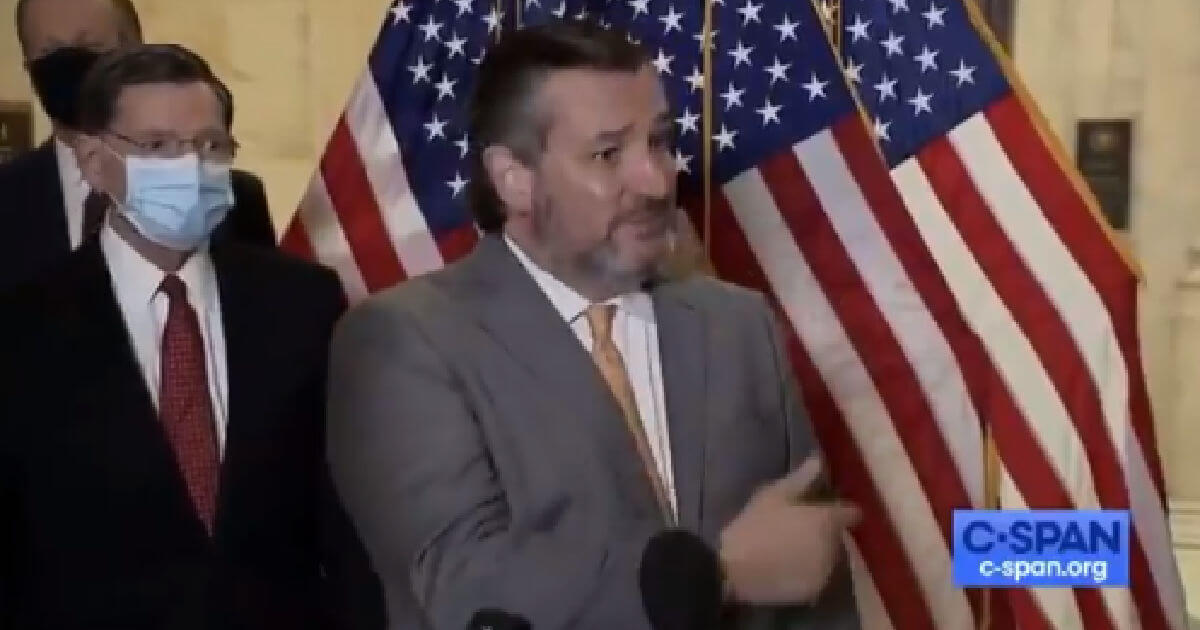 When it comes to dealing with snarky, whiny reporters, Sen. Ted Cruz is one of the best.

On Wednesday, he verbally sparred with an unidentified reporter who, bizarrely, kept asking the Texas senator to don a mask before taking questions from the media. Cruz hit the reporter with a little bit of that science card that liberals love to use on Republicans, but fail to follow themselves, especially when it’s not politically convenient.

The exchange between the two was nothing short of amazing.

Cruz was forced to remind the reporter about what it means to receive the COVID-19 vaccine and recent guidance from the CDC, which again, the left loves to cite, unless it’s not convenient in the moment.

“Would you mind putting a mask on for us?” the unidentified reporter asked him as he was about to field questions from the press.

“Yeah, when I’m talking to the TV camera, I’m not going to wear a mask,” Cruz said. “All of us have been immunized.”

“You’re welcome to step away if you’d like,” Cruz said. “The whole point of a vaccine — CDC guidance is what we’re following.”

You can watch the exchange below:

REPORTER: “Would you mind putting on a mask for us?”

CRUZ: “Yeah, when I’m talking to the TV camera, I’m not going to wear a mask. All of us have been immunized.”

CRUZ: “You’re welcome to step away if you’d like.” pic.twitter.com/0d0rvz0OAJ

Not surprisingly, the tussle between the two quickly went viral, with hundreds of thousands of social media users sharing video footage of Cruz absolutely destroying the reporter.

The reaction on social media was priceless, with a long list of people commenting on how stupid the reporter acted in the moment.

“This is exactly how to respond to a performative virtue signaling reporter pretending to be scared of a vaccinated politician,” Daily Wire’s Cabot Phillips tweeted.

“I don’t get it. Psaki’s been conducting briefings without a mask on in an enclosed room for 2 months. If that’s been fine, why is Cruz not wearing a mask a problem?” author James Surowiecki tweeted.

Cruz’s exchange with the unnamed media hack was similar to an exchange Mark Meadows had with a reporter last year, long before the vaccine and updated guidance were in play.

.@markmeadows stops to talk to press. He pulls mic away to socially distance & takes off his mask.

When media objects, he instantly cancels the interview: “I’m not going to talk through a mask.” pic.twitter.com/WcSDFqv87g

The reporter who called out Cruz was obviously desperately trying to get some attention and name recognition. At least I hope that’s the case, as it’s unimaginable that we have such smooth-brained, low IQ people in the press who would make such an asinine request.