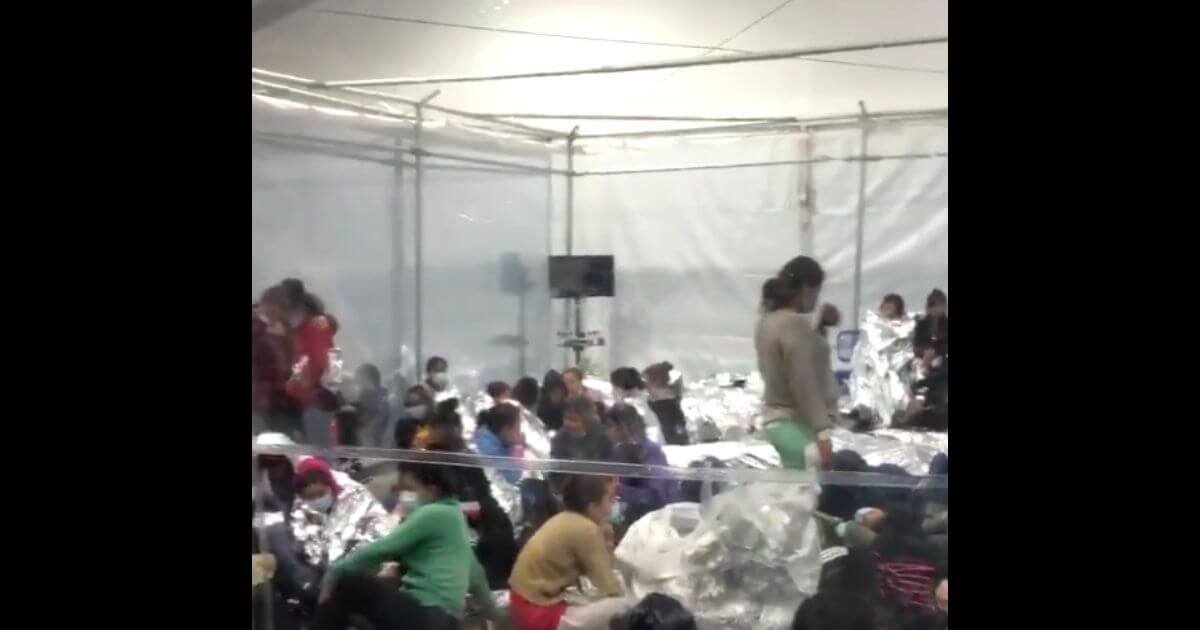 A 14-second voyage into a world of misery has been shared by Republican Sen. James Lankford of Oklahoma as he toured the southern border on Friday.

“Day two from the border — this is a pod that’s designed to hold 80 people that’s currently holding 709,” Lankford tweeted in the text accompanying the video of the Donna, Texas, facility designed to hold families and unaccompanied children who have crossed the border illegally.

“I understand why the Biden team does not want cameras to be allowed in this location,” Lankford said in a video message from the facility.

He said that in the pod featured in the video, “They were literally piled in; had no room. They were taking turns laying down on the floor because there’s no space for them to be able to be there.”

“None of this was true three months ago,” he said.

For a side-by-side comparison, the first photo is from my trip to the border in 2019–the second is from today. Plenty of space to walk around and safely spread out. Tell me this isn’t a crisis. https://t.co/ING6lsNYor pic.twitter.com/ujQXNxkQKD

“Literally when President Biden came in and announced that he was changing the policy, they showed us the stats and showed how it skyrocketed in February and March,” he said.

Lankford noted that the surge “is creating a huge crisis.”

“We have a large percentage of folks here that are COVID-positive, but they’re not tested here for several days, so they’re literally spreading it all around,” he said, noting that after being released from the facility, migrants can spread the disease anywhere in the nation.

Lankford also said that officials have been “releasing people just straight out into the country” because there is no place to hold them.

Update from the US-Mexico border pic.twitter.com/ZQqsQYR5gp

“There’s a reason that President Biden is not wanting the information about this facility and other facilities to be able to get out. there’s also a major reason that the smugglers are also actually pushing families through right now into this area because 41 percent of the drugs that come into the United States between the ports of entry are coming through right here. So literally they are sending families one way in large groups and then pushing drugs another way into the country,” he said.

“This is a massive crisis that’s going to be rolling for a very long time in the United States,” he said, as criminals exploit the surge.

Lankford spent Thursday getting a first-hand look at the border.

“Out with Border Patrol tonight near McAllen TX – no question the border is OPEN,” Lankford posted Thursday night on his Facebook page.

“Anyone with a child can enter the US from any country in the world. I watched hundreds of people being allowed in tonight. No criminal background check from their home country, no COVID testing, no verification that the child you are traveling with is related,” he wrote.

Lankford noted that migrants know how to game the system.

“If a 25 year old male claims to be 17, he is allowed into the country as an unaccompanied minor,” he wrote.

“People from more than 50 countries have crossed the border in the past few weeks and they have been released into the US and told to show up to a hearing years from now, but NO ONE looks for them when they do not show up for their hearing,” he wrote.

“President Biden should come see the real effects of his policies. This has to stop now. America welcomes legal immigrants from all over the world, but this is out of control illegal immigration,” Lankford wrote.

Cartels and Smugglers Taunted Us