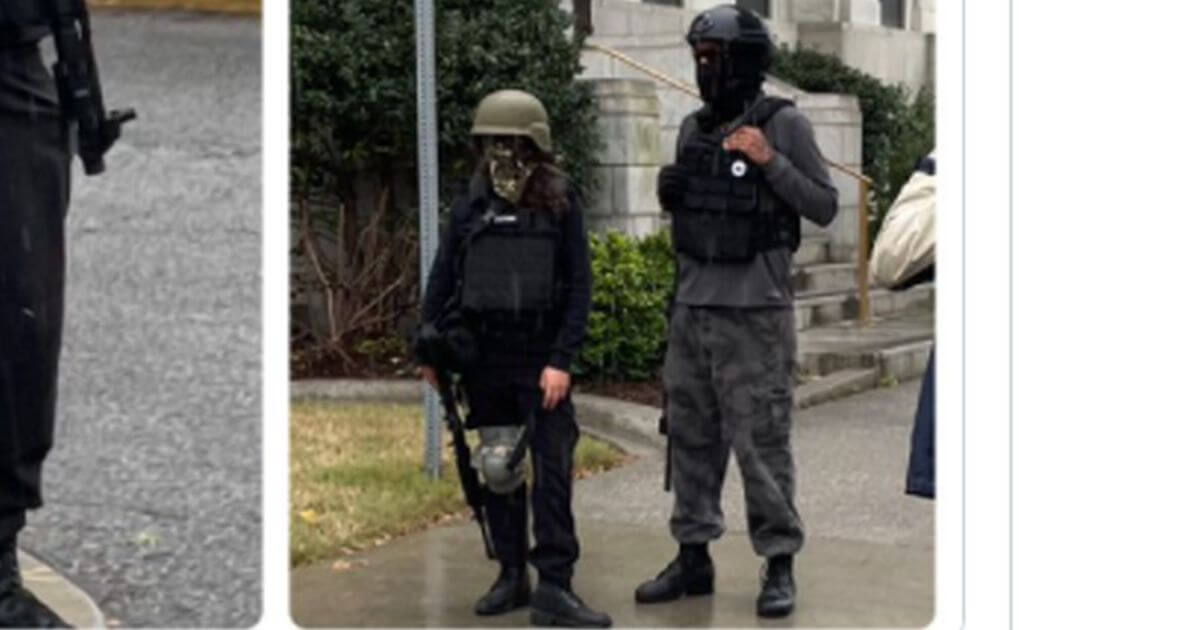 Imagine the reaction if Conservatives armed themselves and entered into the Capitol building in a bid to protest election laws. You don’t have to, as we see the hysterical response the January 6 psyop is getting. Mothers and sons are arrested and held without bail for walking around peacefully after being ushered in by Capitol Police.

But when the Democrats are responsible for armed militia at the Georgia State Capitol, we get crickets.

Masked, helmeted private militia carrying AK47s and AR15s showed up today at the State Capitol. You have not heard about it because the gunmen are radical leftists. Imagine the news coverage if one of them was wearing a MAGA cap. pic.twitter.com/4dEatissEk

The pictures he shared show black militia members armed and outfitted with tactical gear. David Shafer said, “You have not heard about it because the gunmen are radical leftists. Imagine the news coverage if one of them was wearing a MAGA cap.”

The militia came in response to the SB202 bill that was signed into law. Conservatives created the bill to fix Georgia’s election process. The left wants you to believe that requiring voter ID and in-person voting is somehow racist voter suppression likened to Jim Crow.

Rep. Cannon was arrested for storming a closed signing of the bill to promote her political career. She banged on the door of the Governor’s office to the point of disruption, and she was arrested for it.

A reporter for the Capitol Beat, Beau Evens, tweeted the events saying:

“Armed protestors outside the Georgia Capitol this morning say they’re opposed to the recently enacted elections bill SB 202 and plan to escort Rep. Park Cannon on her way inside.” His Twitter thread continued saying, “The armed protesters say Rep. Cannon has received threats against her life and that they’re here to ensure protection for her as she enters the Capitol to conclude the legislative session today.”

Evens finished saying, “Rep. Cannon was arrested last Friday for knocking on Gov. Brian Kemp’s office door as he signed the Georgia elections bill SB 202 and for allegedly stepping on an officer’s foot as he directed her outside the Capitol building.”

All of this because of a bill that ensures elections are run with integrity. The strict voter ID rules for mail-in ballots ensure that there is no question on who voted. Banning food or drinks outside of polling places ensures the party that historically bribed people with goods to vote can no longer do that.

One of the little know gems of the Georgia election bill – since the voter ID stance takes up most of the space – is that it halts absentee ballot applications from being accepted within 11 days of an election. This seems common sense after the state had such a hard time counting the large volume of absentee ballots that came in at the last minute.

It is hard to argue voter suppression when the Republican-led bill requires local election boards to hold two Saturdays of early voting and even opens up the option for the local election officials to hold poll hours for two Sundays.