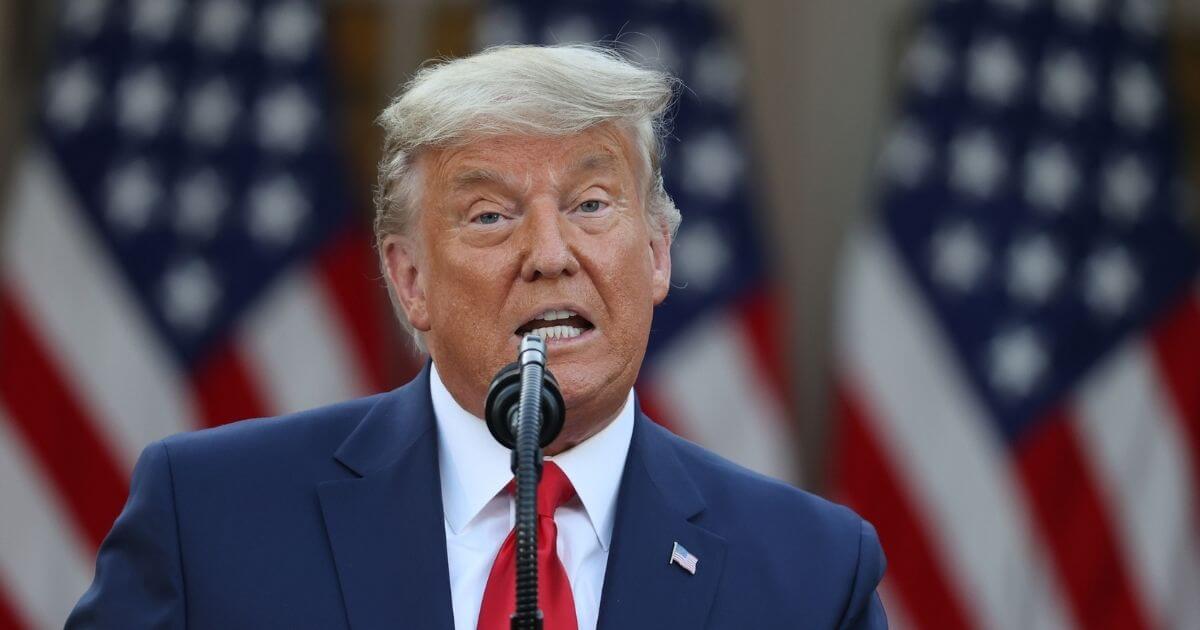 One of the Democrats’ worst nightmares could just be getting started.

With their party in tenuous control of the White House, the Senate and the House, the Biden administration is planning a massive new spending package that will include a gigantic tax increase to help pay for Democratic dreams.

But with the loudest voice in the Republican Party speaking out on Wednesday, that job might have just gotten considerably harder.

In a statement released in an email, the 45th president blasted Biden’s plan as a “massive giveaway to China, and many other countries, that will send thousands of factories, millions of jobs, and trillions of dollars to these competitive Nations.”

“This legislation would be among the largest self-inflicted economic wounds in history,” the statement continued. “If this monstrosity is allowed to pass, the result will be more Americans out of work, more families shattered, more factories abandoned, more industries wrecked, and more Main Streets boarded up and closed down — just like it was before I took over the presidency 4 years ago. I then set record low unemployment, with 160 million people working.”

Democrats and their boosters in the mainstream media will no doubt be tempted to try to write off Trump’s statement as the roaring of a toothless lion, a creature that once threatened them but they’d now managed to silence.

His statement came on the same day the social media giant Facebook was making headlines for removing a video of Trump being interviewed by his daughter-in-law, Lara Trump, for an Instagram post. (Because Facebook owns Instagram, its policy of banning Trump over the Jan. 6 Capitol incursion is in place there, too.)

That would be forgetting the 63 million voters who turned out for the Trump-Pence ticket in 2016, and the 74 million who showed up four years later.

Many of those supporters turned out on social media to support Trump’s statement (though there were plenty of liberal attackers from the depths of the cesspool, too).

I stand with 45.
We won’t back down. It took voter fraud to take this guy down. All that did was create more followers, more patriots, more people who seek individual freedom for themselves. We will be back. Stronger, wiser and ready to Make America Great Again.

I miss him so much. Great president who’s for the people and speaks the truth!

He’s right, not bc he says so but bc it’s the way it’s always been. Every decision Dems make will be abt enriching themselves, their donors, & lobbyists. Always has been, always will be. That’s not to take away irresponsible spending by Repubs, bc they have been guilty of it too.

I miss when we had a president who actually cared about “We The People” instead of what’s in their pocket.

No matter how much Democrats and the mainstream media want to pretend their party’s wafer-thin majority in the House and one-tie-breaker-vote power in the Senate constitutes a mandate, the American people know otherwise.

And just as not a single Republican voted for the monstrosity of a coronavirus “relief” package that President Joe Biden, House Speaker Nancy Pelosi and Majority Leader Chuck Schumer managed to pass, the chances of Republican cooperation on a bill that will raise taxes on Americans while providing more perks for Democrats’ favored classes were already vanishingly small.

After Trump’s statement, however, the chances of any GOP cooperation likely disappeared entirely.

“Joe Biden’s cruel and heartless attack on the American Dream must never be allowed to become Federal law,” the statement said. “Just like our southern border went from best to worst, and is now in shambles, our economy will be destroyed!”

Whether Democrats and the mainstream media accept it, Trump remains the titular head of the Republican Party as well as the odds-on favorite to win the GOP 2024 nomination if he chooses to run (considering he’ll be 78 by then, of course, that’s no sure thing).

And when he talks about the “American dream,” sane people know he means it. (Democrats only use the phrase, it seems, when they’re welcoming lawbreaking border jumpers onto American soil).

That statement Wednesday made it clear — if there were any doubt — that Trump is going to be playing an active role in maintaining Republican #resistance to the Biden-Harris administration, and the Schumer-Pelosi enablers in the House and Senate — through the 117th session of Congress, into the 2022 midterms and beyond.

It’s true that the republic is in grave danger, with radical leftists in control — however slight — of both houses of Congress and the presidency. But it’s also true that there are tens of millions of Americans who understand the danger. And that former President Donald Trump is still very much in the middle of the fight.

And that could mean the nightmares for Democrats are just getting started.