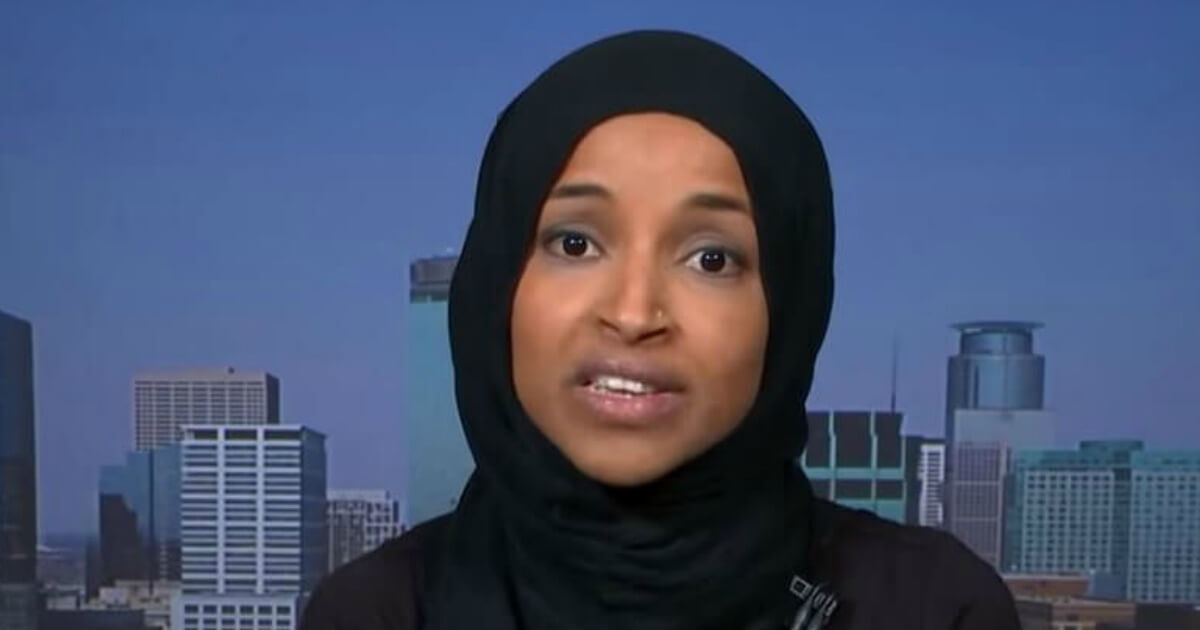 Noah Green, 25, is the suspect in the Friday attack. USA Today reported Green rammed his car into two Capitol Police Department officers in Washington, D.C. outside of the Capitol, killing officer William “Billy” Evans. Green then reportedly exited the vehicle armed with a knife, a weapon which can be purchased virtually anywhere, and charged at other officers.

He was killed after police fired at him in self-defense.

The suspect described himself as a follower of racist Nation of Islam leader Louis Farrakhan on Facebook, according to the New York Post. Additionally, Green’s ethnicity is non-white, so this story will most certainly disappear from network news broadcasts and other mainstream media outlets in the coming days.

But before any of that occurs, Omar apparently saw the tragic carnage reportedly caused by Green to connect his alleged actions to one of the Democratic Party’s sworn enemies: firearms.

Omar, who has made her opposition to police officers well-known, tweeted a shallow remembrance of officer Evans, although not by name, and then found a way to make his death about AR-15s.

“Heartbroken to learn another CP was killed while protecting the Capitol. My thoughts and prayers go out to the officer’s family and the entire Capitol Police force,” Omar tweeted.

“The death toll would have been worse if the assailant had an AR-15 instead of a knife,” she tweeted.

Heartbroken to learn another CP was killed while protecting the Capitol. My thoughts and prayers go out to the officer’s family and the entire Capitol Police force. The death toll would have been worse if the assailant had an AR-15 instead of a knife.

With no valid way to propose a bill for automobile, Farrakhan or knife control, Omar still found a way to bring the left’s feared AR-15 platform of a sporting rifle into the horrifying situation. Democrats are of course right now in the process of attempting to ban such weapons with a bill proposed by Democratic Sen. Dianne Feinstein of California last month.

Thus far, the bill has gained no traction. But Democrats never let a crisis go to waste.

In tying in a rifle with an auto and knife attack, Omar transparently used the death of a cop to keep her party’s anti-gun crusade alive. The shameless tweet was pure politics.

Omar might as well have tweeted, “The death toll would have been worse if the assailant had a Lockheed Martin F-22 Raptor instead of a knife.”

Neither a fighter jet, nor a rifle, was used by the Capitol attacker — which didn’t matter to Omar. Anti-gun rhetoric had to prevail here. Additionally, linking the man to white nationalism seemed to be out of the question.

The Post actually had the audacity to share an image of Green, which USA Today and other outlets refrained from doing:

A man, reported to be Green, killed a police officer with his car and then charged at others with a knife — not a gun. If you’re a radical, anti-gun Democrat, such an attack is a missed opportunity to blame the weapon.

Omar, foiled in politicizing a tragedy by pesky details about the weapon used, still couldn’t let a political opportunity slide through her hands.

The radical Democrat is at this moment, you’d have to assume, probably attempting to reconcile a way to connect Green with white supremacy.

Marjorie Taylor Greene Suspended From Twitter On Easter Sunday After Posting This...

What’s He Hiding? Georgia’s Secretary of State Raffensperger Petitions Court – Prefers State Not be Forced to Hand Over Ballots for Audit -