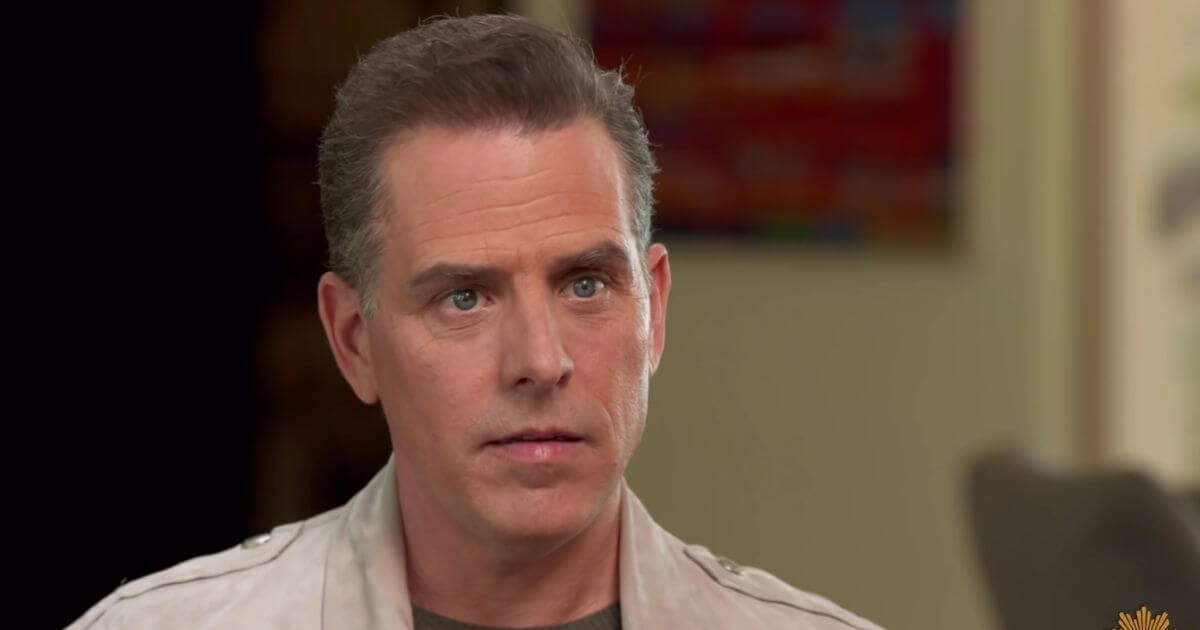 In a bombshell report published Thursday, the Daily Mail claimed to have authenticated the abandoned laptop allegedly belonging to Hunter Biden, and if its contents are indeed true, they should bring the world crashing down on the Biden family dynasty.

Hunter, according to a report first broken last fall by the New York Post, left a MacBook at a Delaware computer repair shop in April of 2019. Its contents led to reporting that purported to implicate now-President Joe Biden in an intentional pay-for-play business scheme — along with Hunter and others — in China.

The laptop also told a story of Hunter engaging in heavy drug use, paying for sex with prostitutes and engaging in a sordid, toxic and drug-fueled relationship with his late brother’s widow, Hallie Biden.

Hunter confirmed some of the details of his drug use in an interview this past week with CBS News:

According to the Daily Mail, that laptop has been completely authenticated as the legitimate former property of Hunter, now 51. The Daily Mail outlined how it authenticated the hard drive, and shared another narrative of Hunter as an immoral and demanding addict son who actually took advantage of and abused his high-powered father.

Not to cut Joe Biden — the man currently attempting to sink our country into an abyss — any slack. But objectively speaking, some of the texts and emails shared by the Daily Mail show Hunter allegedly lacked any semblance of empathy and treated a loving dad like parmesan cheese embedded in the rug of a sleazy motel.

“When Joe texted him a typically doting message ‘Good morning my beautiful son. I miss you and love you. Dad’ on February 24 [of 2019], Hunter raged at his father for ‘having made clear to the world that the only reason for not [running for president is your] family problems im glad to be the f***ing bullseye you painted on my back,’” the Daily Mail reported.

“Hunter complained that his father’s advice to not defend himself in the media over stories about his expensive divorce from his ex-wife Kathleen Biden or his affair with his brother’s widow Hallie had backfired, and added sarcastically: ‘Oh … good morning … from f***ing rehab,’” the report added.

Shockingly, the messages infer the ailing Joe Biden only launched a presidential bid at the demand of Hunter.

“Your team just made me the uncontrollable troubled tax cheat philanderer sex and drug addict that you tried so hard to fix but couldn’t yt. They just totally wrote my life away,” Hunter texted Joe in 2019, per the report. “If you dont run ill never have a chance at redemption.”

Joe Biden allegedly assured his son he would run, but also urged him to watch what he sent via text message — apparently aware of security concerns.

“’I’ll run but I need you,” Joe Biden reportedly texted in 2019. “H[allie] is wrong. Only focus is recovery. Nothing else … When you can and feel like it call. Positive my text etc a target. Love.”

Biden also reportedly sent a message that said, “Be careful what you text. Likely I’m being hacked.”

Other messages purport to show Hunter borrowing money from Joe to take care of his obligations — after he’d spent his own money presumably on crack cocaine and sex. One shocking detail: the Secret Service was reportedly protecting Hunter Biden from himself in the middle of former President Donald Trump’s term in office, despite the fact Hunter was not entitled to protection from the agency.

Hunter left these details out of his recently-released book, “Beautiful Things,” which the country’s leftist media is currently treating as some sort of grand success story.

“Maryman and his business partner Dr. Joseph Greenfield used the same forensic tools to pick apart the drive as federal and state law enforcement use in criminal investigations,” the outlet reported.

“The report said the data on the drive ‘appear to be authentic’, and that after an extensive search of its contents for any tell-tale signs of tampering, Maryman and Greenfield found ‘no evidence’ of fabrication — by Russians or anyone else.”

The Daily Mail’s report tells a story of a troubled family that was more or less run by an out-of-control crackhead who used his last name and father to live a consequence-free life — at the expense of taxpayers, when you account for the alleged role of the Secret Service in his life.

There goes the Russian hacking narrative pushed last October by Democrats, the mainstream media and even Joe Biden himself. The president was reportedly treated like dirt by his son, and he might only be president because he was pressured to launch a bid by a drug addict.

According to the shocking report, had Hunter not made such a mess of his personal life, Joe Biden might now be in retirement — which is obviously where the man belongs.

The Daily Mail described the forensic analysis as follows:

The firm’s founder, Brad Maryman, was a 29-year veteran of the FBI, served as a Chief Information Security Officer and founded the bureau’s cyber forensics unit. His partner, Dr. Joseph Greenfield, is an associate professor at the University of Southern California and helped write their degree program in intelligence and cyber operations.

After an extensive analysis of the hard drive, Greenfield and Maryman produced a report for DailyMail.com detailing their findings.

Using the same forensic tools as federal and state law enforcement in criminal investigations, they found a total of 103,000 text messages, 154,000 emails and more than 2,000 photos.

– They found emails for multiple accounts on the laptop dating back to 2009, and other data which ‘appears to be related to Mr. Biden’ between 2016 and 2019.

– The report’s findings were consistent with the known timeline for the hard drive. A Wilmington, Delaware computer store work order with Hunter’s signature shows he left his 2017 MacBook Pro laptop there on April 12, 2019.

– Hunter’s iCloud email address was added to the laptop’s system on October 21 2018, as well as his work email at his firm Rosemont Seneca on February 2 2019.

– The same day, a Gmail address he used to log onto sex cam sites, and another personal Gmail address belonging to Hunter, were also added.

– Emails addressed to Hunter’s various email addresses dating from December 2009 to December 2020 were found on the system.

– An iPad with the name ‘Hunter’s iPad’ and three email addresses associated with the Biden family was backed up on the laptop and on iCloud in January 2019 and again a month later.

– Greenfield found 818 call logs in this iPad backup with timestamps from June 2016 to February 2019.

– In February 2019 an iPhone XS was also synced with the laptop. Its serial number was consistent with the timestamps of the data on the phone.

In conclusion, ‘The operating system timestamps appear to be authentic, and no evidence was found to suggest that the timestamps or data were altered or manufactured,’ the report said. ‘No indications were found that would suggest the data was manufactured.’