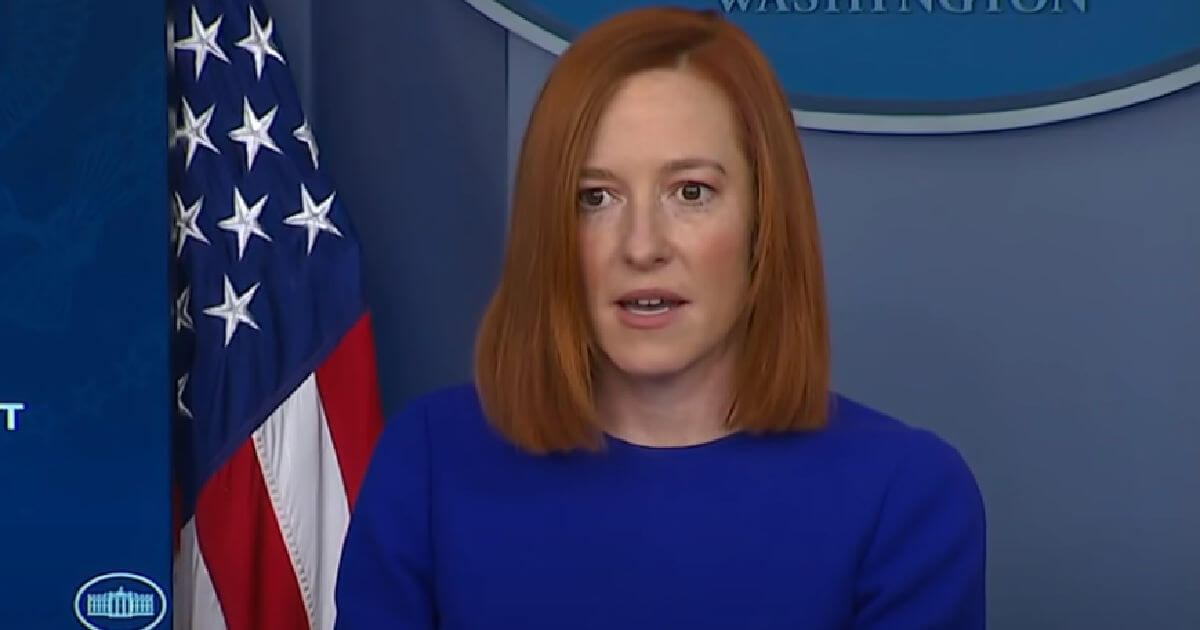 White House press secretary Jen Psaki said something so brazenly racist when speaking of white, red-state Americans during her Monday media briefing that she should have been fired immediately.

That of course won’t happen. Nonwhite and white leftists alike are free to say whatever they’d like about the deplorable white Americans who they hold in such contempt. But the current administration’s contempt for rural Americans is apparently unparalleled.

When explaining the federal government’s efforts to vaccinate people so they can go on being told they still have to wear two masks, Psaki went low. She actually said the White House hopes to convince rural, red-state Americans to accept the government’s COVID vaccines and has resorted to racial stereotyping in a particularly elitist fashion to spread the message.

Psaki implied that people in states such as Mississippi, Ohio and Oklahoma can only be reached through targeted ads on television — and during events such as NASCAR races and TV programs about deep-sea fishing.

“The New York Times, last week, came out with a story that Mississippi was having a hard time getting folks vaccinated,” Psaki was told by a reporter, according to an official White House transcript. “But it’s not just Mississippi; it’s a bunch of other rural states — Ohio, Oklahoma. They’re at 34 percent vaccination rate.”

“Has the White House been in touch with these governors to see what they can do now?” Psaki was asked. “Because, of course, this impacts herd immunity and the goals of the White House just to get these shots in arms.”

Psaki’s answer was a doozy. No circling back was necessary, as she was armed and ready to generalize millions of people as racing fans in cowboy hats. In what would become a racist screed, Psaki announced steps to reach “local messengers” and others to pass along how safe vaccines are.

“We’re also investing $3 billion to states and community-based organizations to strengthen vaccine confidence in the highest-risk and hardest-hit communities,” she said. “And often, people think of that as just black and brown communities, and that is not. As you’ve noted, that is also conservative communities, white evangelicals. It’s a range of communities around the country.”

Psaki then showed the world in a few despicable sentences how she views those who live far away from the overrated coasts and their mask-polluted beaches.

“We’ve also had a number of our members of our COVID team, from Dr. Fauci and Dr. Collins — participate, as an example, participate in a range of media interviews,” she said. “You know, an example is Dr. Collins participated in ‘The 700 Club.’ Dr. Nunez-Smith hosted a faith leaders roundtable. We’re also looking for — we’ve run PSAs on the ‘Deadliest Catch.’ We’re engaged with NASCAR and Country Music TV.”

Establishment media darling Dr. Anthony Fauci is going to convince white Christians to vax up with an ad blitz during a show about fishing? These ideologues in Washington intend to reach us deplorable Christians by catching us between country music videos and NASCAR races?

This writer has proudly lived for decades in Oklahoma. Fans of “Deadliest Catch” aren’t holding watch parties in churches and country music died when we lost Merle.

What an incredibly derogatory thing to say. Now, imagine the question and answer from Monday’s briefing were directed at black Americans. Imagine this statement from Psaki: “We’re also looking for — we’ve run PSAs on ‘Black-ish.’ We’re engaged with the NBA and BET.”

Psaki would rightly be out of a job, as she should be now.

I was wondering why someone had printed “get vaccinated” on all the wife beaters and Duke’s mayonnaise jars at Walmart https://t.co/RcF271VAAs

This is akin to saying they put PSA stickers on watermelons and buckets of fried chicken. 🙄 https://t.co/5OwleP8GlX

Contrary to what racist Psaki and other coastal elites might believe, red states are very modern. We have indoor plumbing, lush and challenging golf courses, fine dining, state-of-the-art museums and a diversity in musical taste — even if most red-state residents haven’t yet accepted a simple truth: The Beach Boys put together some of the finest and most overlooked musical arrangements in history.

Some of us red-state folk even like our MAGA, our AR-15s and our Metallica together with a dash of informative reading.

It should also be noted that women in our areas also own shoes and they dazzle us lucky redneck men almost daily. They’re hardworking career women, outstanding mothers, beautiful wives, clever daughters and fantastic educators and faith leaders.

Most Americans at this point are well aware of the fact that there are vaccines available for those who want them. Some of us simply don’t want one — which is based on a personal decision, and not one rooted in ignorance based on the fact that Nashville’s modern underwhelming lineup hasn’t kept us up to date.

Blue states actually own more than riots and looting. They own the low-information populace. But we already knew that. We also know, as was reinforced by Psaki on Monday, that anti-white racism is increasingly more than acceptable to the current administration and those who support it.