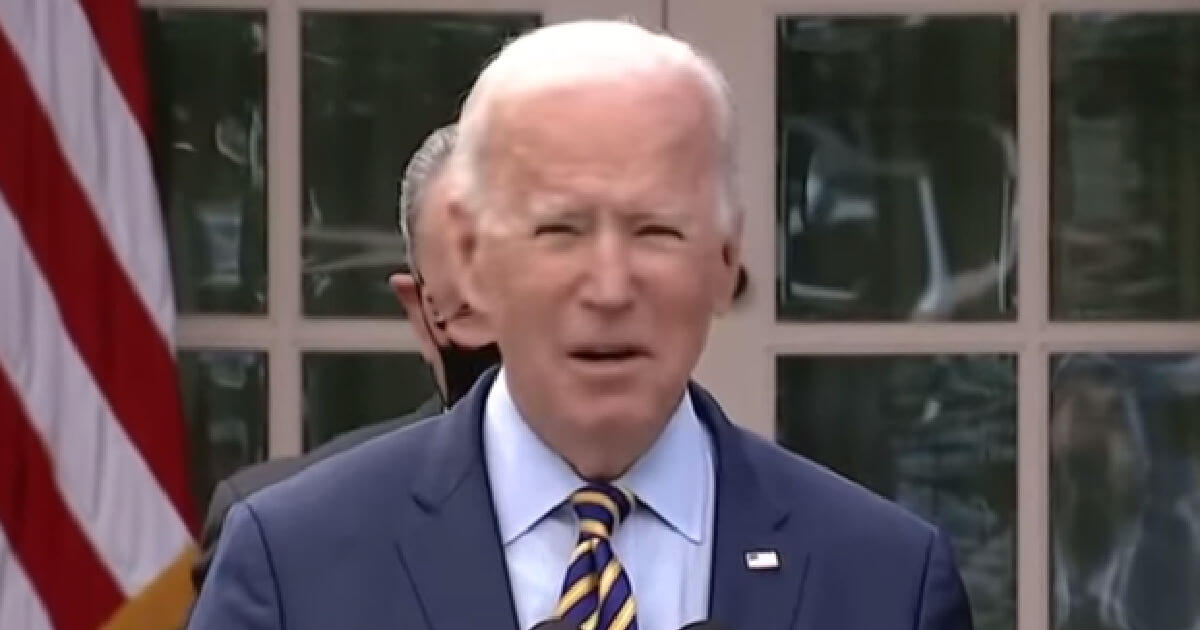 Head Washington Post fact-checker Glenn Kessler is a busy man, which is probably why he doesn’t spend much time fact-checking the nation’s latest president. Biden must not be too important in the whole scheme of things, at least as far as The Post is concerned.

That said, even the capital’s newspaper of record couldn’t ignore this whopper from the president during his weekly economic briefing.

On Friday, Biden touted a number of smaller programs in his budget proposal, including doubling funding for Violence Against Women Act-related items.

The budget “doubles the funding as well for — for VAWA services, including resources to end the rape kit backlog. We’ve been working on this for a long, long time, and we still have a backlog on the rape kit,” he said.

“And — and the point is: A significant number of women who have been raped — and the person has not been found or convicted is because they’re sitting in jail. The average rapist rapes about six times.”

He went on to state that the administration “want[s] to make sure we go through this backlog and find out, to bring some — some certitude to — for the woman who is saying, ‘No, no, it was true. That’s the man. He did it.’ And it changes the whole perspective — all the hearings we held on that.”

As Kessler pointed out in a Monday fact-check in The Post, however, Biden “stepped into a hornet’s nest of fierce debate among specialists on sexual assault” when he mentioned how the average rapist will rape six times.

“This is one of those easy-to-remember statistics that emerge out of academic research. But whether it is accurate is another question,” Kessler said.

While the White House didn’t comment on where this statistic came from, Kessler deduced it was almost certainly from a 2002 study, principally conducted and authored by David Lisak of the University of Massachusetts at Boston, titled, “Repeat Rape and Multiple Offending Among Undetected Rapists.”

This isn’t just a number that’s been used to justify doubling spending on VAWA-related initiatives, including rape kits. The Obama administration trotted it out frequently during its task force on campus sexual assault — the one that led to the infamous “Dear Colleague” letter that launched innumerable campus kangaroo courts in which individuals (mostly men) were accused of crimes but unable to question their accusers or often discover the scope of what they were being accused of.

“The report said it drew on four samples of a total of 1,882 men between the ages of 18 and 71, who answered questionnaires, in exchange for a small payment, after they encountered researchers while walking across a college campus between 1991 and 1998,” Kessler noted.

“The researchers found 120 men ‘whose self-reported acts met legal definitions of rape or attempted rape, but who were never prosecuted by criminal justice authorities.’ Of these men, 76 were identified as ‘repeat rapists’ based on their survey responses. ‘These repeat rapists each committed an average of six rapes and/or attempted rapes and an average of 14 interpersonally violent acts,’ the report said.”

So already, Biden is mischaracterizing the study: The figure wasn’t dealing with the average rapist, but the average repeat rapist — a little more than half the cohort. And then there are the problems with the study itself.

“The statistic is still in circulation, even though it is based on data as much as 30 years old, but it has been controversial. Lisak and his research methods have been under attack for many years,” Kessler wrote. He pointed to Davidson College professor Linda LeFauve, who “has written at length about what she views as the flaws in Lisak’s paper.”

“She has charged he pooled data from surveys of uncertain provenance, the participants were not necessarily college students and it’s unclear how many people were subject to follow-up interviews,” Kessler wrote.

“There is no research to confirm the Lisak statistic, studies that dispute it, and more than sufficient evidence that Lisak has been perpetrating a fraud,” LeFauve said.

Mary P. Koss, a regents’ professor in the College of Public Health at the University of Arizona, has published the only national study of self-reported sexual assault by college men in 1988. Even though that data is older than Lisak’s paper, she’s also pointed out the problems with the study. Her findings were that “the average number of rapes by men who self-disclosed acts that met a legal definition of rape was 2.6.”

That means Biden inflated the number by more than 225 percent.

“I am very saddened that advisers to the president have misinformed him,” Koss said. “The figure he uses is actually not able to be fact-checked because it provides an ‘average,’ which would most appropriately come from a national sample that doesn’t exist in the scientific literature.”

In 2015, she also contributed to a paper published by JAMA Pediatrics that directly attacked the findings in Lisak’s paper: “Though a small group of men perpetrated rape across multiple college years, they constituted a significant minority of those who committed college rape and did not compose the group at highest risk of perpetrating rape when entering college,” it read.

“Lisak’s critique of the study was also peer-reviewed and rejected for publication. This paper is scientifically complex but at highest levels of peer review discredits Lisak’s empirical work and the claims he extrapolates from it,” she added.

Furthermore, the author of that paper, Kevin Swartout, recently completed a subsequent national study that deals with 697 male graduates from four-year colleges.

“I found that the average college man who commits rape assaults 1.48 victims. To help contextualize this a little more, 81.7 percent of the men in the study who reported committing rape reported assaulting one victim,” he said.

“Overall, 10.2 percent of the overall sample reported perpetrating rape while they were an undergraduate student.”

So, as for Kessler’s “Pinocchio Test” as a fact-checker regarding the truthfulness of Biden’s claim?

“Sexual assault of women is an important issue, and Biden has long been a leader in pressing for laws to combat it. But now that Biden has the presidential megaphone, he has a responsibility to use statistics that are widely accepted and not controversial,” Kessler wrote.

“Perhaps he remembered this statistic from the Obama administration’s work on campus sexual assault, but that was some time ago. Even then, Lisak’s findings were under fire from other academicians.”

“Obviously, The Fact Checker cannot litigate the debate between Lisak and his critics,” he went on to say. “But the White House should be aware of the dispute and be more cautious about validating a statistic that may or may not be correct. Otherwise, Biden may be perpetuating misinformation.

“Ordinarily, given the academic dispute, we’d consider this a Two-Pinocchio claim. But because the president turned a study about campus rape into a statistic about the average rapist, he earns Three Pinocchios.”

Three out of four doesn’t look particularly good. And, yes, Biden is using this number to push for increasing the number of rape kits, something law-and-order types shouldn’t be disappointed about.

That said, this statistic is going to show up in more dubious places, particularly when it comes to the administration’s take on campus sexual assault. Biden has made it clear he wants to reinstate the same Title IX campus trials his predecessor abandoned. Using this scare-tactic number, which is derived from dubious research, may help his case with the American people.

It was a lie so bald-faced, however, that even The Washington Post couldn’t let it slide.