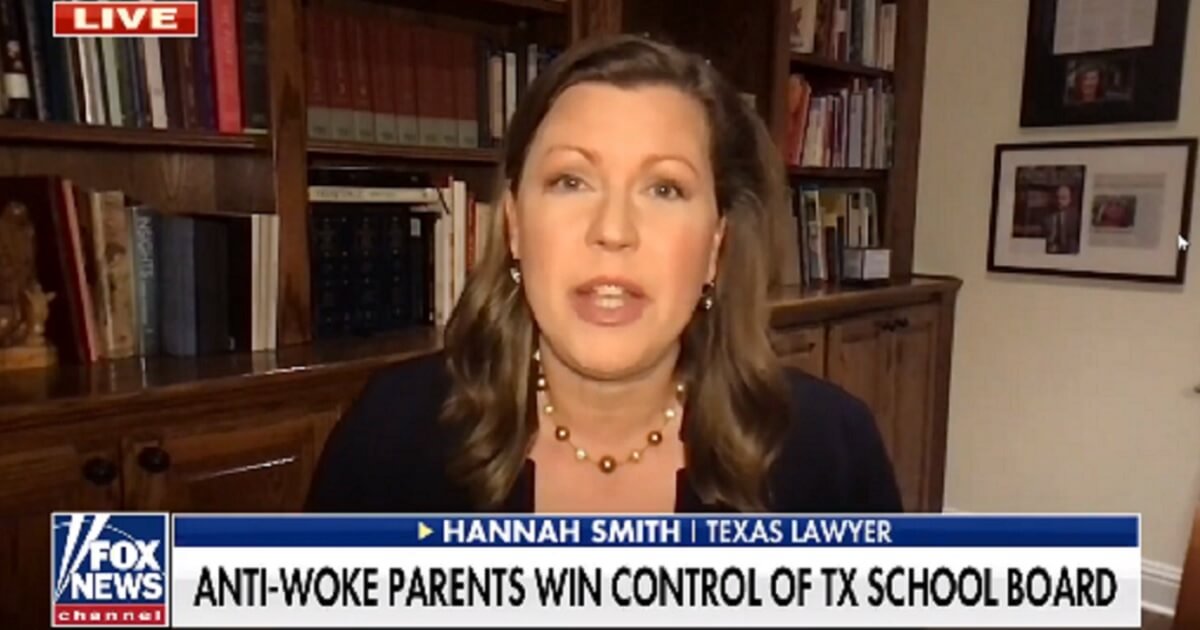 It’s rare that a local school board election draws national attention. However, this weekend’s races for control of two seats on the board of Carroll Independent School District in Southlake, Texas, became a microcosm of the debate over critical race theory in American education.

As the Washington Examiner reported, the election Saturday ended with a thorough rejection of a diversity training program put in place after a 2018 racial controversy, with two “anti-woke” candidates taking home almost 70 percent of the vote.

While NBC News described the Dallas suburb as “historically conservative,” the network noted that proponents of the program “were dismayed by the margin of their defeat.”

The victors, of course, weren’t dismayed at all.

“The voters have come together in record-breaking numbers to restore unity,” said winning candidate Hannah Smith, according to NBC. “By a landslide vote, they don’t want racially divisive critical race theory taught to their children or forced on their teachers. Voters agreed with my positive vision of our community and its future.”

“Our school district convened a district diversity council, which was comprised of about 60 parents and community members. And they met together to talk about ideas about how our school district could respond to this issue,” Smith said during an interview with co-host Steve Doocy.

“In theory, it was a really great idea, but unfortunately we had a handful of administrators in the school district that decided to push down into the plans some really radical ideas, and that’s when parents really revolted and said, ‘We don’t want this kind of radical divisive policy taught to our kids.’”

Check the interview below:

The policy, which took effect nine months ago, called for mandatory diversity and sensitivity training for faculty and students, as well as a system to track racial incidents and a code of conduct for student accountability, according to NBC. The diversity council also recommended creating a “director of equity” position to implement the program, NBC reported.

Again, that all sounds great in theory, as Smith noted. In practice, the tenor of the program became a point of division, particularly the tracking system for so-called racial microaggressions — subtle incidents of low-key racial bias which are often perceived and unintentional.

The Southlake Families PAC, which formed within days of the release of the diversity council’s plan, according to NBC, opposed the implementation of the critical race theory program and supported the slate of candidates that won on Saturday. Not only did it build a movement within Southlake, it tied the issue to national trends in education.

“I was on conference calls with parents from all over America who are fighting the same thing, so it’s important for people to know that they can band together and that they can make change.”

Smith credits their success, in part, to the fact they “really educated our community about what critical race theory was, why it’s so bad for our kids and why we don’t want it in our district.”

“We started doing a lot of investigative work,” she said. “We asked for open records requests from the district. We used FOIA [Freedom of Information Act] to really find out what our district was doing and that empowered us with information that we could then use to fight against it,” she said.

Adding to parental furor was the fact left-wing activists had painted Southlake as a hotbed of systemic racism.

Speaking after he was apprised of the election results, Ed Hernandez, Smith’s opponent, cited accounts collected by the Southlake Anti-Racism Coalition. That student-led group, which was in favor of the diversity program, collected over 300 self-reports of current or former students who said they suffered racial, religious or anti-LGBT abuse or mistreatment.

Smith said this fed into a media-led narrative of a white, affluent Texas city teeming with systemic racism.

“Southlake is an amazing city. People move here from all over the country because it’s such a great place to raise their kids,” Smith said. “We have award-winning schools … People love that unity and that’s what draws us here.”

“And so when the mainstream media was saying that we are an awful town, people are racist, our kids are racist, our schools are systemically racist, it just wasn’t right,” she added. “And so people turned out to the polls in record numbers.”

While municipal elections in the city generally draw in the area of 3,000 people, Smith told Doocy, Saturday’s election — which included two city council seats, the two school board seats and the mayor’s post — drew more than three times that.

Two of the five races contested on Saturday drew over 10,000 voters, according to Southlake Style — a city council seat and the other school board race, where anti-critical race theory candidate Cameron “Cam” Bryan defeated also won with almost 70 percent of the vote.

However, all five of the seats up for grabs saw vote totals well 9,000 and all of the winners were Southlake Families PAC candidates, according to NBC. All candidates also received over 68 percent of the vote.

“It was a radical response by our community saying, ‘We will not stand for this false narrative anymore,’” Smith told Doocy.

Before the election, an unnamed local conservative commentator quoted by NBC News said, “So goes Southlake, so goes the rest of America.” One can only hope.

A single ugly racist incident and a series of self-collected, unvetted personal testimonies by the Southlake Anti-Racism Coalition don’t justify the systematic, agenda-driven critical race theory overhaul that was foisted upon the city’s schools.

In Southlake, citizens like Hannah Smith and Cameron “Cam” Bryan stepped up and delivered a resounding reality check to those who wish to divide us.

In cities and towns across America, it’s time for more parents to follow their example.