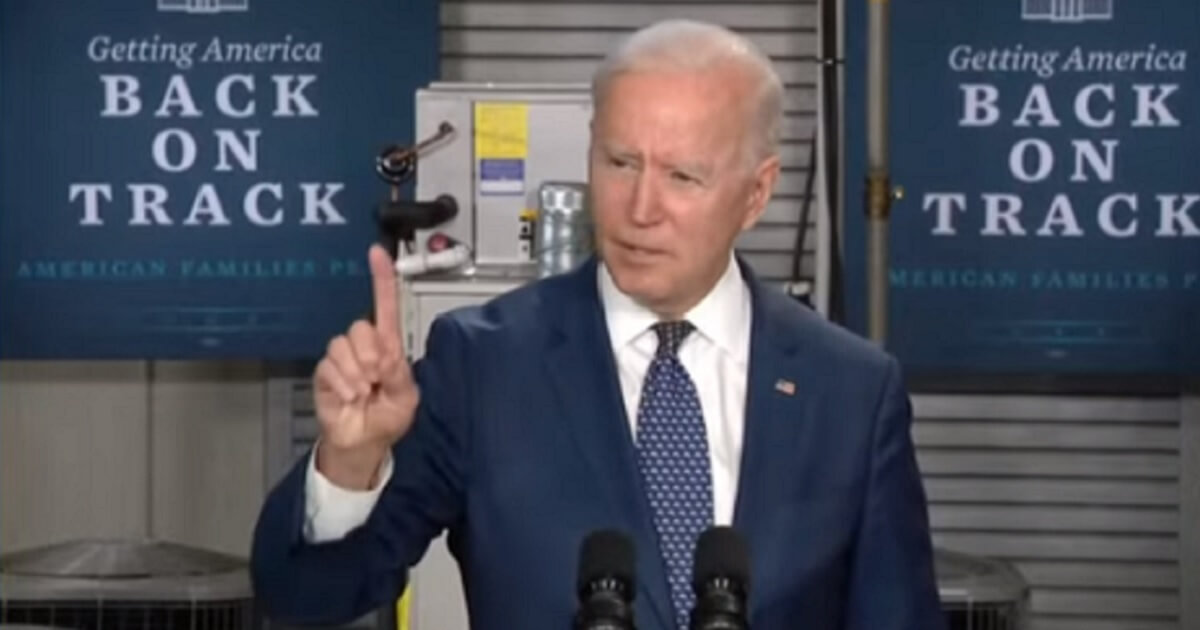 One of President Joe Biden’s biggest promises lately is laughably low — but there’s nothing funny about it.

When Biden took the national stage last week for his first address to Congress, a key part of the speech was the “American Families Plan,” a $1.8 trillion monstrosity of government overreach and intervention aimed at increasing American dependence on the government.

But, according to a study released Wednesday, the price Biden quoted was ridiculously off base. And it’s a rock-solid bet it’s going to get worse.

According to the study released by researchers at the University of Pennsylvania’s Wharton School of Business, the price of Biden’s boondoggle over the next 10 years would be in the ballpark of $2.5 trillion — a $700 billion overrun from the initial estimate.

In the Biden era of big-government giveaways, where Democrats and the mainstream media talk about trillion-dollar projects with the easy complacency of the people who will never have to pay the bills, it’s easy to lose track of the figures, but even in 2021, $700 billion is a serious amount of money.

Remember, it was only a decade or so ago that then-President Barack Obama in 2009 signed a “recovery” package that was worth $787 billion, as Fox News reported at the time. But Democratic dreams have gone so bonkers that what was once a gargantuan proposal would now barely cover the projected overrun of the Biden spending.

As Fox noted Wednesday, the main disparity between the Biden administration’s estimate and the Penn Wharton Business Model comes from education spending.

The cost of early childhood education — free, universal pre-kindergarten, free community college education — combined with child tax credits would be much more expensive than the Biden administration is trying to convince the American people.

“We estimate that AFP would raise 1.3 trillion in new tax revenue over the same period. By 2050, the AFP would increase government debt by almost 5 percent and decrease GDP by 0.4 percent.”

So, the claim of the Biden administration, along with its hallelujah chorus in the Democratic Congress and propaganda arm in the mainstream media, that the plan would “pay for itself” with tax increases is looking like a joke in the cold analysis of economics.

And this is from the Ivy League University of Pennsylvania, remember, a land conducive to liberal fantasies, not some rock-ribbed conservative or libertarian group like the Cato Institute.

(The Cato Institute, by the way, is pointing out the dangers of putting the government in charge of early childhood education, according to Fox. Considering the vulnerability of educational institutions the government does control, that’s an obvious recipe for disaster.)

For the liberals who dominate the intellectually dystopian brave new world of social media these days, reactions to the ludicrous difference between the Biden administration’s estimate and the Penn Wharton Business Model tended to range from “whataboutism” comparisons to the Trump tax cuts to actually celebrating it as another argument for wealth redistribution.

(“All the more reason to #TaxTheRich!” as one apparently not even remotely embarrassed Twitter user put it, with hashtags dedicated to #TaxTheWealthy, #WealthTax and #TaxBillionaires, among other things.)

But even in these troubled times, there remain some vestiges of sanity — or at least realistic cynicism that no sensible person would believe a Democrat’s estimate on a social program’s cost anyway.

Spending at this rate is going to hurt American families and future generations.

This isn’t “free money”, this is taxpayers’ money. And the bill will come due. https://t.co/wDJW9mr3Pw

No one who followed the clown car of the Democratic primary fight would put an ounce of credence in Democratic budget numbers.

This is the party that, if it weren’t for black voters in South Carolina in February, would almost certainly have nominated the openly socialist Bernie Sanders to the presidency (rather than the openly addled Joe Biden).

Democratic talk of trillions to pay for “infrastructure” that seems to cover everything but actual infrastructure, and how spending on American families that will magically pay for itself, or be paid for solely by taxing corporations and very wealthy Americans, simply can’t be taken seriously.

This is the party of Rep. Alexandria Ocasio-Cortez and the Green New Deal, remember.

Democratic plans, in short, have as much to do with future reality as the five-year plans of the old Soviet Union — they’re aspirational, not operational, to put it charitably.

If the Biden plans pass, the Penn Wharton Business Model estimate of a $700 billion cost overrun is going to look conservative (the only thing conservative about the administration).

Unless Republicans retake the House and Senate in the 2022 midterms, laughable budget projections, monetary plans based on fiat rather than fact, are going to become as normal for the U.S. as they were for the USSR.

And there’s nothing funny about that at all.