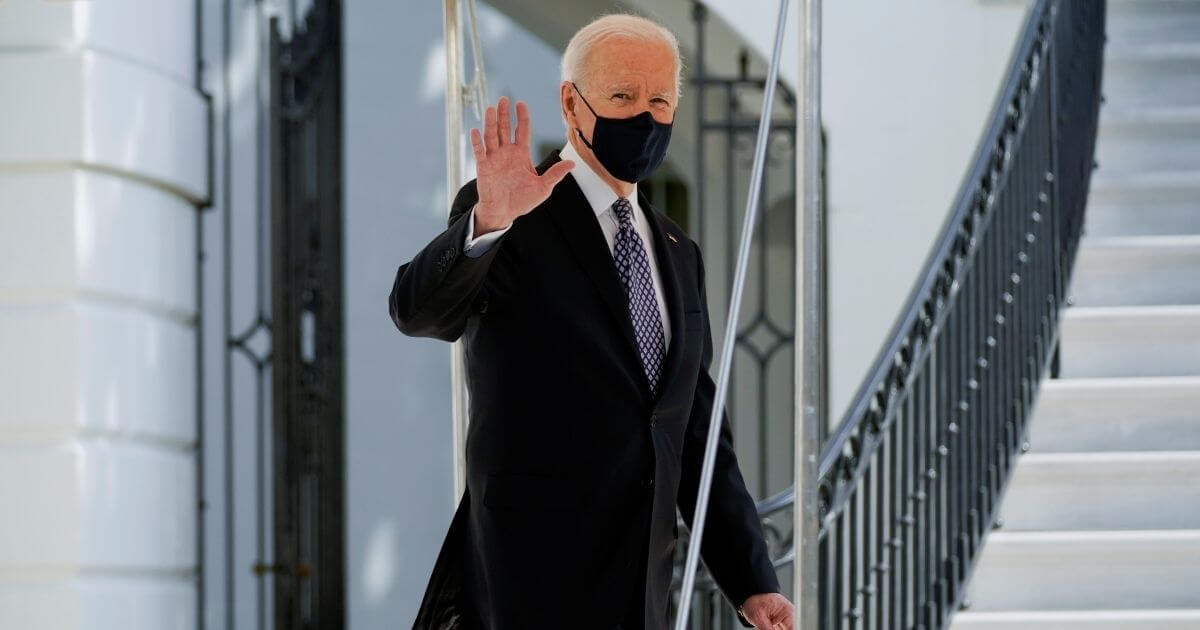 President Joe Biden offered perhaps his most nonsensical answer yet on Friday abut his theatrical mask-wearing practices after a reporter asked him about them during a media briefing about the economy.

Biden, in a rare trip to the podium to talk about last month’s abysmal jobs numbers, was put in front of reporters following news that only 266,000 jobs were created last month. But one intrepid reporter wanted to talk about Biden and his inconsistent habits with regard to wearing masks, and not his putting shackles on the economy.

“You walked out to the podium with your mask on. Why do you choose to wear a mask so often when you’re vaccinated and you’re around other people who are vaccinated?” the reporter asked.

It was a good question — one that needed to be asked, seeing as how Biden is at this point outright denying science essentially every time we see him.

A reporter just asked Biden why he’s still wearing a mask after being vaccinated and working around other people who have all been vaccinated.

Biden really isn’t helping the effort to vaccinate America with this answer. pic.twitter.com/a1yR9Sgy4B

“Because I’m worried about you,” he shot back in response to the reporter’s question.

After a moment of awkwardness, Biden then stated: “No, that’s a joke. It’s a joke.”

“Why am I wearing the mask? Because when we’re inside it’s still good policy to wear the mask. That’s why,” he said. “When I’m outside — the problem is lots of times I walk away from the podium I forget to put my mask back on because I’m used to not wearing it outside.”

What? Biden wears a mask indoors among others on some occasions because it’s “good policy,” but he also doesn’t wear one outdoors when he’s feeling forgetful? Is he spending more time outdoors than indoors?

Has Biden traded in the basement for the backyard? Did Biden forget that he mostly always wears a mask outdoors?

Biden did utter one bit of truth, albeit unknowingly, when he said, “It’s a joke.”

Biden’s selective mask virtue signaling is a farce. It’s a joke that is not amusing and furthers no productive agenda with regard to public health.

His inconsistency with regard to the mask flouts Centers for Disease Control and Prevention guidance, which tell the rest of us that vaccinated individuals don’t need to adorn the mask in some situations — like being outdoors away from others, or indoors with other vaccinated people.

Biden’s mask-wearing is absolutely contributing to vaccine hesitancy when you consider that people who are on the fence about getting the shot are mostly hoping for an end to all of this madness, but are told that even after being inoculated, it won’t be good enough.

They still have to be polite and submissive by covering up their faces.

Why get the shot at all if you’re going to be asked to continue to engage in the dog and pony show?

This past week, Biden was featured along with his wife, first lady Jill Biden, in a photo with former President Jimmy Carter, 96, and former first lady Rosalynn Carter, 93.

While there are numerous things which are odd about this photo, chiefly among them is that Biden wasn’t wearing his trusty mask.

We’re pleased to share this wonderful photo from the @POTUS and @FLOTUS visit to see the Carters in Plains, Ga.!

That fact that Biden wasn’t wearing a mask here exposes the sideshow that is his mask-wearing. Biden was indoors and in the company of two elderly people with health conditions. Why was it not good policy then for him to wear a mask with the Carters in such a confined area?

According to what we’re told by Biden about masks and vaccinations, his own decision to hang around indoors with two very vulnerable people was irresponsible, to say the least. Had Biden been an ordinary person in a supermarket, he might have been called homicidal by strangers.

More likely than not, Biden trusts his vaccine and he found a moment where he didn’t want to engage in pandemic theatrics while posing with the elderly Carters, who are two people he probably has great respect for.

In any event, Biden and others in his camp undermine messages about vaccines every time we see them now, while Biden himself has been inconsistent since day one of his presidency with regard to masks. On Friday, someone in the mainstream media finally asked him a question about it, and the president wasn’t able to put forth a lucid explanation.

There of course isn’t such an explanation. We’re simply watching a poorly choreographed show, and right now Biden is the star of it.