NASA Test Will Light Up US Skies in Array of Colors, Many Americans Will Be Able to See the Show 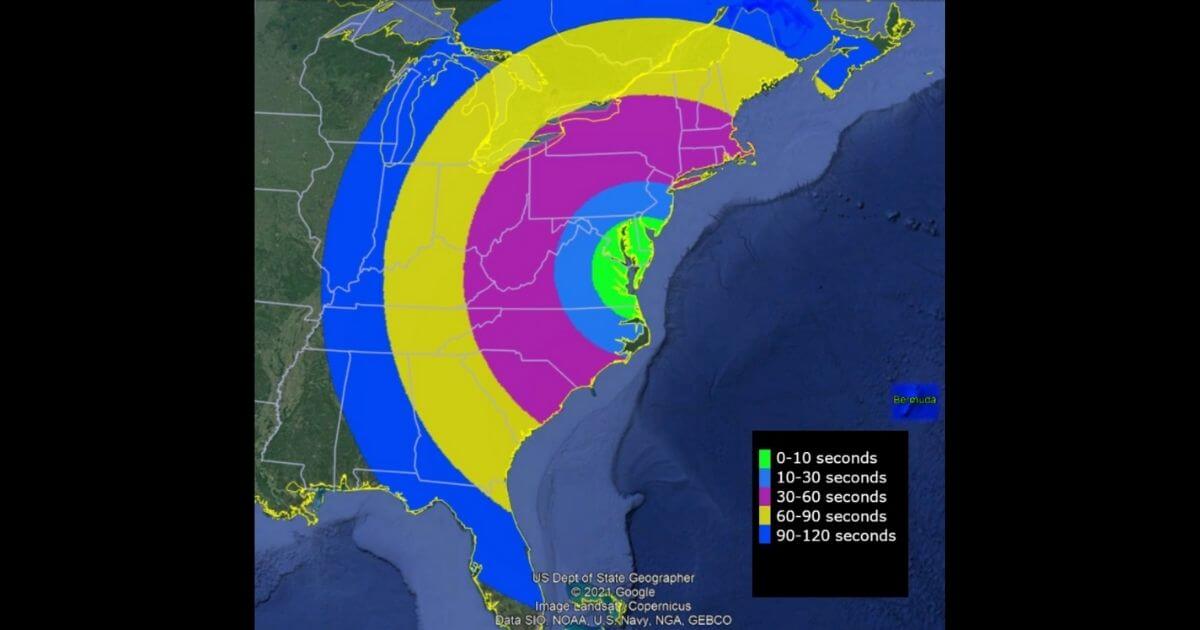 A NASA rocket could light up the sky Sunday night along the East Coast if the weather cooperates.

The launch, which was first scheduled for May 8, was initially postponed until Saturday due to weather issues. Saturday’s launch was then scrubbed as well, with a new date set for Sunday.

The launch is currently planned for no sooner than 8:04 p.m. Eastern Daylight Time, assuming poor weather does not interfere again, according to a NASA news release. The launch window is about 40 minutes.

The rocket will be launched from the Wallops Flight Center in Virginia.

Part of the experiment being conducted calls for the release of barium vapor that will form two green-violet clouds.

Depending upon the weather, the launch could be visible from spots along the Atlantic Coast to the Mississippi River.

LAUNCH UPDATE 🚀 The Black Brant XII launch carrying the KiNET-X payload is a GO for tonight. Weather is looking great for Wallops, but we’ll still be keeping an eye on those pesky clouds in Bermuda. Our window opens at 8:03 pm ET. Live coverage will begin at 7:40 pm. pic.twitter.com/tI4U2dq8fZ

The show, however, will only last for about 30 seconds.

The vapor will be released when the rocket is just north of Bermuda, while the rocket reaches between 217 and 249 miles of altitude.

Immediately after releasing the vapor, spherical clouds will turn green and violet. “After exposure to sunlight the vapor clouds quickly ionize and take on a violet color,” the government agency reported.

NASA said that viewing with a naked eye will be difficult, but explained how the experiment will take shape.

“The ionized portion of the cloud becomes tied to the magnetic field lines and diffuses parallel to the field lines but not perpendicular to it.  In the mid-Atlantic region latitudes, the field lines are inclined by about 45 degrees to the horizontal, so the violet clouds stretch out in a slanted orientation and look more like short trails than a cloud,” NASA said.

“Because the motion of the neutral portion of the clouds is not constrained by the magnetic field lines, they spread out more quickly and become too thin to see with the naked eye much sooner than the ionized component.”

One illustration of the concept is an aurora, such as the Northern Lights.

“The electrons in Earth’s space environment and in the solar wind have relatively low energies. Yet the aurora is generated by very high energy electrons. What is the energization mechanism?” Peter Delamere, the KiNET-X principal investigator from the University of Alaska-Fairbanks, said, according to another NASA release.

“This is a very simple experiment with known input parameters that will allow us to quantify the flow of energy to the electrons. It is possible the KiNET-X payload will generate auroral emissions on a very small scale, but that is an unknown aspect of this experiment. In-situ instruments will, however, measure the energized electrons directly,” he added.

NASA said that the barium vapor being released is not harmful to the environment or public health.