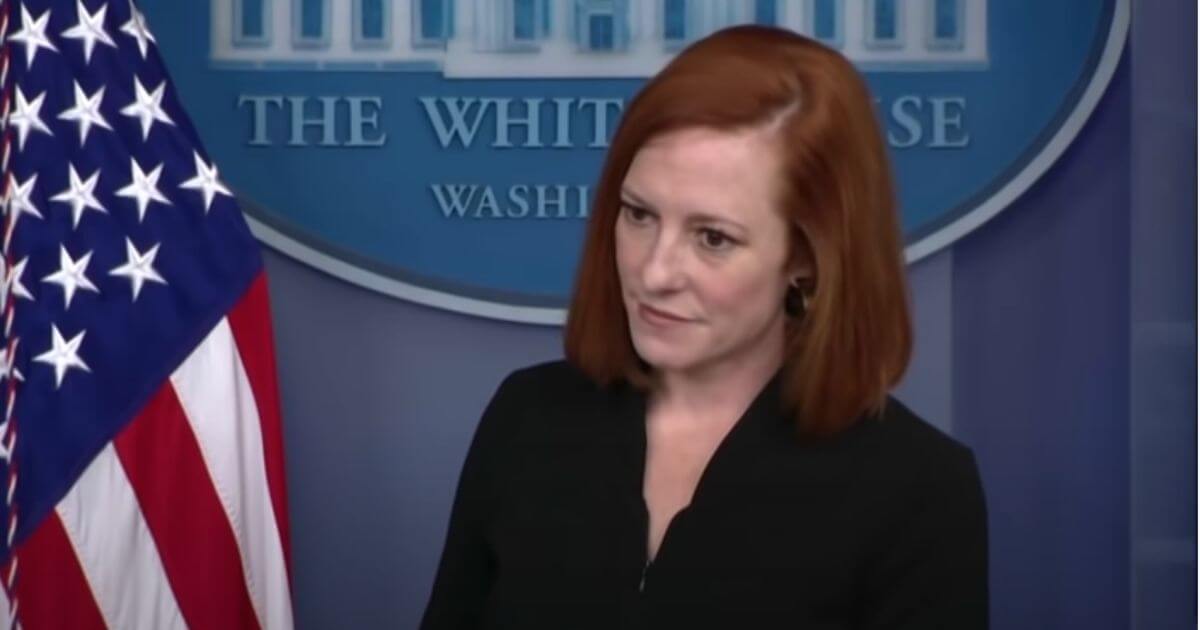 You know, I’ve started to feel kind of sorry for Jen Psaki. Here she is, White House press secretary for a totally opaque administration, faced every day with questions from increasingly frustrated reporters — and she’s not even good at lying or evading questions, poor thing!

I mean, it’s not her fault that the Biden camp opted to hire her instead of someone who could look you in the eye and lie like there was no tomorrow without flinching. I don’t know why, exactly, they couldn’t find a political operative better suited to spin the Biden administration’s massive failures, gaffes and flip-flopping stances, but I doubt Psaki knows, either, considering she doesn’t seem to know very much at all.

So we certainly can’t blame her for having absolutely nothing substantial to say in President Joe Biden’s defense for once having likened the lifting of mask mandates to “Neanderthal thinking” now that the Centers for Disease Control and Prevention have slackened their recommendations for mask-wearing.

The CDC under Biden has been accused of simply playing politics with its new guidelines, which now generously recommend that Americans no longer need to wear masks in most cases — well, if they’re fully vaccinated, at least.

This is rather inconvenient for Biden, however, since it was only back in March that he said of states lifting their mask mandates, “The last thing we need is Neanderthal thinking” that “everything is fine, take off your masks, forget it. It still matters.”

So what, exactly, was Psaki to do when confronted during Friday’s media briefing by reporter Peter Doocy of Fox News with the question: “So, what happened to President Biden saying in March that he thought lifting mask mandates before every adult American goes and gets a shot is ‘Neanderthal thinking?’”

Yeah, Jen, what did happen to that?

Thinking quickly on her feet, Psaki scrambled for a reply and came up with a gloriously worded complete and total non-answer.

She did refer to Biden, who she recently admitted shouldn’t be taking impromptu questions from reporters, as “our North Star” though, in case you needed an extra cringe with your facepalm.

“Well, first, let me say that the president, our North Star, has been listening to the guidance of our health and medical experts and teams, and that’s exactly what we’re doing in this case,” she began.

“The CDC, the doctors and medical experts there, were the ones who determined what this guidance would be, based on their own data, and what the timeline would be. That was not a decision directed by, made by the White House. The White House was informed of that decision, just to give people assurance of that,” she continued.

Did you catch her answer?

No, Doocy didn’t either, so he tried again, asking if Biden believes that states like Mississippi and Texas were guilty of governing with a paleolithic degree of intelligence.

“Well, again, I would say that even with this guidance that’s out there, the guidance is not telling states and localities exactly how they should implement,” she non-answered again.

“As you know, there are some localities and states in the country that have higher rates of vaccination than others, some communities that have higher rates of vaccinations than others. And we even know, as this is being implemented, that different localities, businesses will implement it in the way that they feel will help ensure their community is safe,” she continued.

“But I know I am reassured by listening to the guidance of health and medical experts, not political decision-making. So, that’s the point we’re at now,” she added.

Well, now you know that localities have the right to make their own decisions as to the practicality and efficacy of continued COVID-19 mandates (who knew?) but you certainly don’t know if Biden still thinks that they can be likened to cavemen for doing so or what this loose-tongued POTUS has to say for himself in the face of this rather inconvenient hypocrisy.

It’s really rather infuriating, in fact, considering all along, the states were simply taking the CDC guidelines — and yes, Jen, they are just guidelines — and making their own decisions based on the data in their respective localities.

That’s sort of the whole problem with Biden’s comments back in March, as he was effectively insisting every state should preserve their mask mandate regardless of how their states differed from others in COVID-19 cases and vaccination rates.

The CDC and the Biden administration are trailing behind red states who opted to reopen when it seemed safe to do so — and who are doing just fine.