Whitmer Claimed Her FL Trip Was Personal, But Her Nonprofit Was the One Paying For It 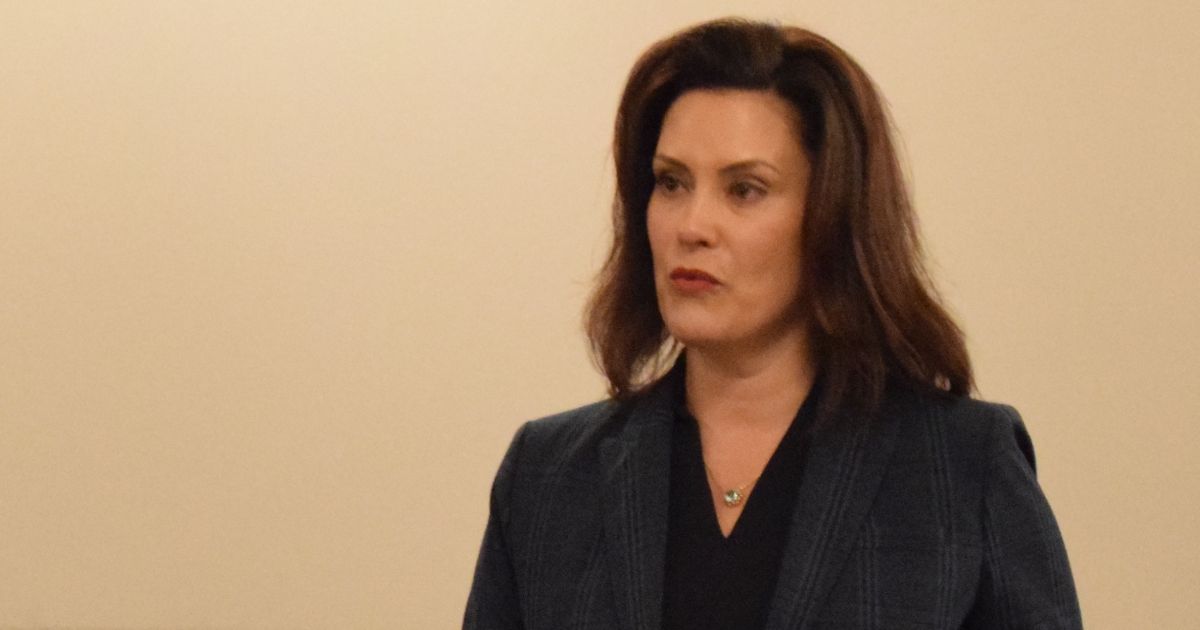 Michigan Gov. Gretchen Whitmer’s trip to Florida is looking worse and worse by the day.

The latest revelation: The plane she used to travel to the Sunshine State, which was owned by a group of wealthy, connected Michigan plutocrat types, wasn’t authorized to fly charter flights, according to the Detroit Free Press.

This might seem to be a minor detail in the whole scheme of things. However, it’s important to recognize how this turned from a public relations fender-bender into an all-out freeway pileup of mendacity and mismanaged messaging — as well as why the fact the plane’s non-charter status is pretty much the skidding 18-wheeler tanker truck barreling into the melange of twisted metal already piled up on the turnpike of the governor’s COVID credibility.

In early April, Whitmer — one of the Democrats’ top lockdown hawks — warned residents of her state not to travel to Florida, especially not on spring break, due in part to a high number of COVID variants floating around the state.

According to an Associated Press report on April 3, she “urged people returning from Florida [that they should] work from home and have their kids learn virtually for at least a week. She and health officials later recommended that people get tested after in-state, out-of-state or international travel.”

“By the recent numbers, we know we’ve got a bit of a reality check happening,” Whitmer said. “We know that COVID is still very present and it is still a very real threat. We may be seeing light at the end of the tunnel, but we are still in the tunnel.”

It turns out that one of the governor’s top aides saw the light a bit too early. Tricia Foster, the state’s chief operation’s officer, posted pictures from a spring break-style girls trip to Florida days afterward, as first reported by Breitbart.

No one denied Foster took the trip, but Whitmer’s press secretary called it “a partisan attack from a garbage white nationalist website.”

Several weeks passed before a state political newsletter — not partisan and not a “garbage white nationalist website” — reported Whitmer herself had traveled to Florida to be with her father, who has a home there.

“The governor did not go on spring break, and she has not left the state in over a month,” Brown said. “In the past six months she has left the state three times, once for the inauguration, once to assist her elderly father who is battling a chronic illness, and once to visit with Michigan’s National Guard troops.

“All trips were very brief, two full days or less, closely followed public health guidelines, and were made when Michigan’s daily positivity rate was in the low single digits. Due to ongoing security concerns, we will not comment further on the governor’s personal schedule.”

To quote the great Maury Povich, the lie detector test determined that was a lie. In an opinion piece for Deadline Detroit, published May 5, journalist Charlie LeDuff reported that “Whitmer asked a group of wealthy Detroit businessmen to provide a private plane they share.”

“Had Whitmer booked a round trip flight from Lansing to West Palm Beach through a private charter company, it would likely have cost $10,000 to $20,000, or a whopping $40,000 for the actual jet she took, according to private jet websites. The latter is more than 25 percent of the governor’s salary — before taxes,” LeDuff wrote.

“We wondered why she reached out to us instead of booking a private charter,” one of the plane’s owners was quoted as saying. “You can’t tell a governor no. Who needs that kind of trouble?”

What say you, governor?

Using a plane owned by a group of wealthy Michiganders in lieu of a commercial flight is a bad look, so Whitmer’s people regrouped. On Friday, they were a bit more forthcoming: Yes, she’d flown on the plane and yes, it had gone to Florida. It was a chartered jet that Whitmer paid for, however.

“Due to ongoing security and public health concerns, we made a decision to use a chartered flight for this trip. The governor’s flight was not a gift, not paid for at taxpayer expense and was done in compliance with the law,” Whitmer’s office said in a memo.

The $27,521 that the flight cost was paid for by Michigan Transition 2019 — which, according to the Free Press, “was initially set up to pay expenses related to Whitmer’s inauguration but has since been used for other officeholder expenses, such as consulting, records show.” Whitmer paid for her $855 ticket aboard the flight, the memo said.

This still doesn’t look fantastic — nonprofit groups like Michigan Transition 2019 have been abused by politicians in the past, particularly when they’re used for personal expenses — and Whitmer’s office hid and dissembled about the trip for as long as feasibly possible, but there’s your answer.

Air Eagle LLC — the company that owns the plane Whitmer flew on, which usually just uses the craft to fly various minor Michigan oligarchs and their guests around — isn’t a licensed charter operator, the Free Press reported Monday.

It’s not a distinction without a difference: As the Free Press noted, “charter flight operators are subject to more rigorous maintenance, pilot training, insurance, and other requirements than other flight companies.”

I know this is the part of these stories with details that sound extraneous and where a few eyes glaze over. I promise you — we’re going somewhere with this. Stay with me here.

There are two types of common registrations for corporate jets like the Gulfstream G280 Whitmer flew on: a Part 91 certificate and a Part 135 certificate.

A Part 91 certificate covers non-commercial operators; as long as you’re only flying yourself, your family or your friends on a corporate jet, you don’t need to meet rigorous standards.

Meanwhile, a Part 135 certificate is for commercial operators. Let’s say you’re a rock band and you want to travel in style. You find a Part 135 operator, bring your entourage and a case of bubbly aboard, and arrive at your destination with a raging hangover.

There are two things that should stick out from the Free Press’ report Monday about the governor’s story.

The first is Whitmer spokesman Bobby Leddy’s explanation that the governor “needed secure transportation, the company was able to provide that, and the trip was paid for.”

The second is this sentence: “Aircraft owners can fly themselves and can in some cases fly friends at no charge under a Part 91 certificate, but if they are going to fly others for a fee they require a Part 135 certificate.”

The first is a hollow lie because if one needs secure transportation, one would look for an operator with a Part 135 certificate. Because of the increased standards for Part 135 operators, charter service PrivateFly noted that “when flying with a registered aircraft in the US, you are 12 times less likely to have an accident or incident if you charter a part 135 aircraft when compared to flying with a privately-managed part 91 aircraft. These differing accident rates are due to the extra safety measures required under Part 135 regulations.”

But you can fly “friends” free, right? And therein lies the second problem.

Keep in mind, the people behind Air Eagle LLC almost certainly knew the difference between a Part 91 and a Part 135 certificate. The likelihood was they also knew the civil penalties for operating a charter flight while only having a Part 91 license were “pretty serious,” according to a former Federal Aviation Administration official, and that the FAA is making a priority of cracking down on this practice.

Are we to assume Air Eagle LLC ignored this? Or was this less of a charter flight and more of an example of flying a “friend” somewhere?

Whatever the case, the FAA is currently investigating, according to a Tuesday report.

“It’s premature to conclude that a violation of federal aviation regulations occurred,” a department representative said. “The FAA is looking into the matter.”

Either way, the pileup of lies continues apace, and one assumes this isn’t going to be the last crash-and-bang we’re going to see from this one.

If only she’d taken Delta.

Video Emerges of Biden in 2004 Admitting He had No Coal Miners in His Family...Repeats the Lie in 2021!