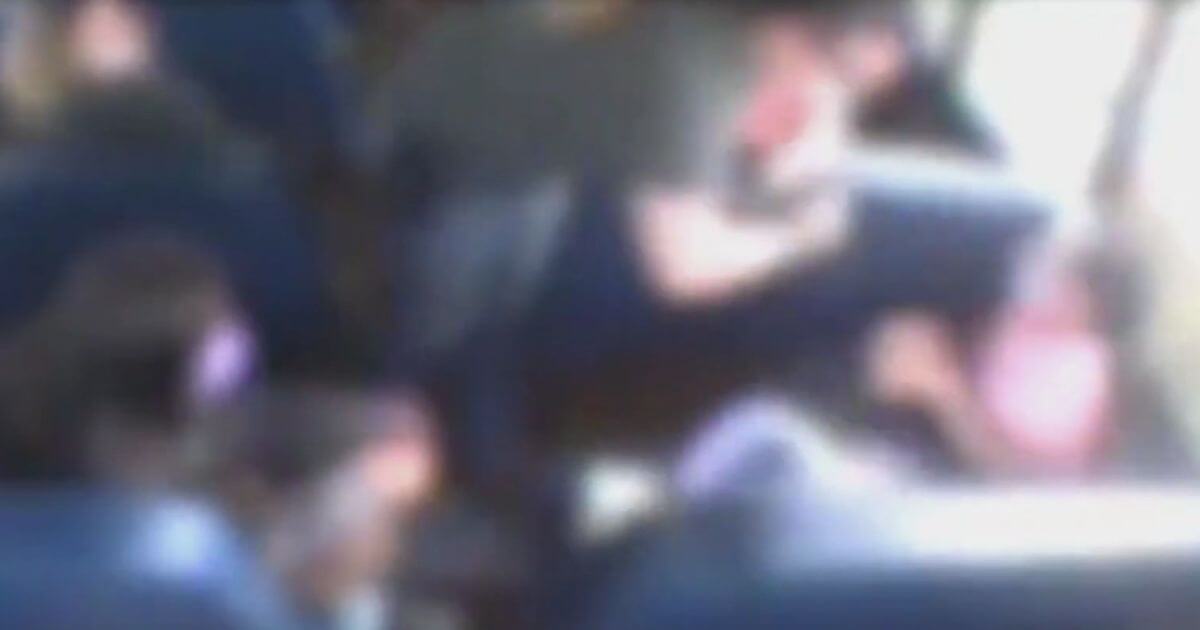 Tensions have been running high throughout the last year regarding many aspects of the coronavirus pandemic. One topic that has been hotly contested is the requirement for Americans to wear face masks.

For almost all of the pandemic, the Centers for Disease Control and Prevention argued in favor of masks for the majority of Americans. Even after it loosened restrictions last week, it is still suggesting masks be worn in schools by both teachers and children.

COVID-19 and the ensuing response has exposed the true colors of many Americans, including a bus driver who allegedly showed he is unfit to be around children.

According to KKTV-TV, several young children got into an argument about wearing masks in the back of a Colorado school bus in early April. The driver, identified as Bertram Jaquez, eventually involved himself.

In surveillance footage, Jaquez was seen attempting to pull a mask above a 10-year-old child’s nose. When she continued to resist, he allegedly proceeded to slap her across the face.

WARNING: The following video contains images that some viewers may find offensive.

In a handwritten statement, the girl explained she moved her mask down because she was feeling sick. This led other children on the bus to demand she put her mask back up over her nose.

She then said one child told Jaquez, who came to her and told her she needed to put on her mask. After she protested, she said the driver “slapped me and walked away.”

“Then we got there he put out his fist to give me knuckles. So I walked by ran out of the bus and ran to my dad and [told] him.”

According to KKTV, Jaquez said in a written statement to the school district, “Out of reaction, I slapped her once.”

The Fremont County School District released a statement on the incident condemning Jaquez’s actions but also seeming to take a passing shot at the girl.

“We believe it is never okay to lay a hand on a child,” the statement said. “The District responded quickly to the situation by placing the driver on administrative leave so that we could fully investigate the incident. Local police were involved during the investigation as well as us being in contact with the child’s family.”

“The driver’s action justified termination of employment, as it goes against District policy and our values. We are very saddened by this incident. Our goal every day is to transport students safely to school and back home, but that can only happen when everyone, including students and staff, follows the rules. We are currently working to identify next steps to help our drivers with strategies designed to support a safe ride to and from school.”

Subtle as it may be, the remark that “students and staff” both need to follow the rules more closely is indicative of the very attitude that could allow such an incident to happen.

To the left, masks have become a sort of religious symbol to signify morality. That can be seen on Twitter, where people have declared they will still wear masks regardless of their vaccination status as a sign of their political preferences.

“[W]earing a mask for another year at minimum even though I’m fully vaccinated bc I refuse to be perceived as a republican,” one user boasted.

Comments like that are widespread on Twitter and other social media platforms. The same party that argued masks should not be political now has apparent members now openly admitting they will wear masks for purely political reasons.

Even establishment media figures have admitted many Americans are programmed to view people without masks on as evil.

“I feel like I’m going to have to re-wire myself so that when I see somebody out in the world who’s not wearing a mask, I don’t instantly think, ‘You are threat,’ or ‘You are selfish,’ or ‘You are a COVID-denier,’” radical leftist Rachel Maddow said last Thursday on MSNBC.

Maddow: Be patient and compassionate with each other as we deal with another period of change. pic.twitter.com/By2uXygf6l

First of all, the world’s tiniest violin is in order for Maddow and her complaint she will no longer be able to identify her leftist friends by a piece of cloth over their faces.

Second, and more importantly, this view is exactly what leads to people like Jaquez allegedly thinking he has a right to slap a 10-year-old girl for not wearing a mask properly.

As the left so keenly pointed out after the Jan. 6 incursion of the Capitol, words have consequences. When Democrats speak in front of people for months declaring those who don’t wear masks are selfish or “neanderthals,” it also has an effect.

Namely, it causes ordinary people who watch the news to demonize others in their heads. This was true in April when the incident on the bus occurred, and it is true even now as mask mandates are eased.

When you make something like a mask into a religious symbol, the followers of that “religion” are not going to just throw it away the first chance they get. Democrats are slowly realizing their rhetoric over the past year is going to have lasting consequences.