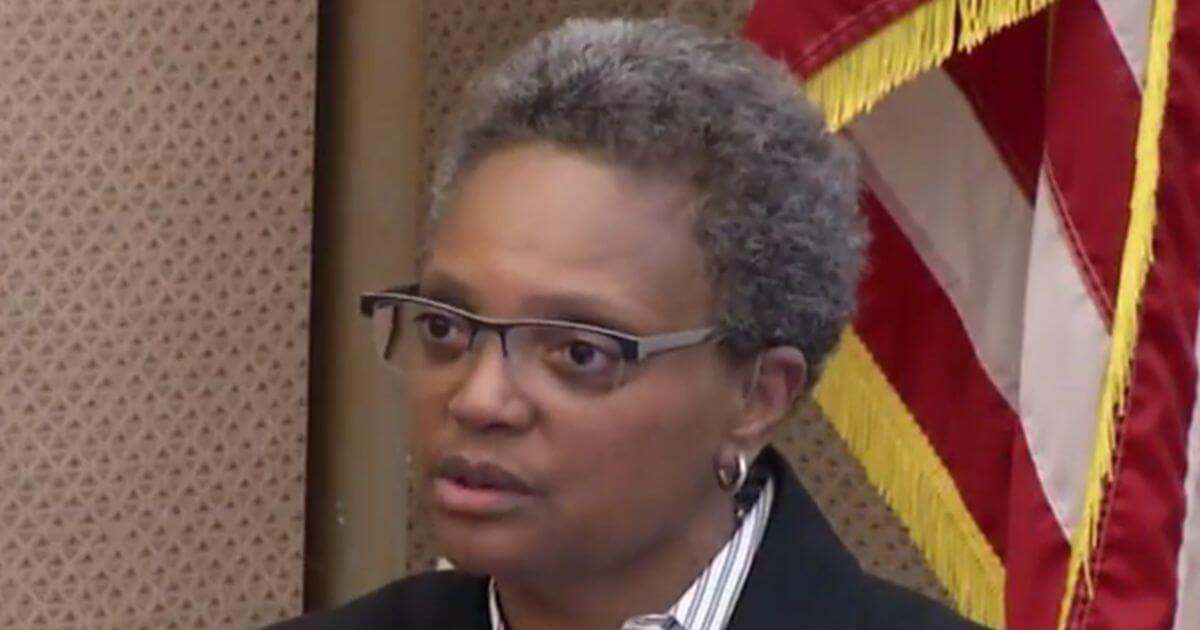 Chicago’s Democratic Mayor Lori Lightfoot is no stranger to controversy (her hypocrisy regarding the COVID-19 pandemic speaks for itself), but her most recent escapade probably takes the cake.

Fox News reported earlier this week that Lightfoot appears to now only be granting interviews to “journalists of color,” which she appears to define as “black or brown” people.

The story was first broken on Twitter by WMAQ-TV political reporter Mary Ann Ahern. “As ⁦[Lightfoot] reaches her two year midway point as mayor, her spokeswoman says Lightfoot is granting 1 on 1 interviews – only to Black or Brown journalists,” Ahern tweeted on Tuesday.

As ⁦@chicagosmayor⁩ reaches her two year midway point as mayor, her spokeswoman says Lightfoot is granting 1 on 1 interviews – only to Black or Brown journalists pic.twitter.com/PAUsacD9Gj

I was told the same thing.

Such a story seems absurd on the surface, even by progressive standards. How can someone in such a position of power engage in blatant racial discrimination with a straight face? George Cardenas, the alderman for Chicago’s 12th Ward, believed there had to have been some mistake.

How is that even true, be serious

However, WTTW politics reporter Heather Cherone replied, saying that she, too, could confirm that Ahern’s original tweet was true. To his credit, Cardenas immediately revised his original position, and demanded that Lightfoot’s policy be “corrected.”

I can confirm, alderman

This should be corrected

Lightfoot decided to get involved before the situation got out of hand — massaging her language to make the racist policy sound better.

“It’s a shame that in 2021, the City Hall press corps is overwhelmingly White in a city where more than half of the city identifies as Black, Latino, AAPI or Native American,” Lightfoot tweeted on Wednesday.

“Diversity and inclusion is imperative across all institutions including media. In order to progress we must change,” she said.

I ran to break up the status quo that was failing so many. That isn’t just in City Hall.

It’s a shame that in 2021, the City Hall press corps is overwhelmingly White in a city where more than half of the city identifies as Black, Latino, AAPI or Native American.

This is exactly why I’m being intentional about prioritizing media requests from POC reporters on the occasion of the two-year anniversary of my inauguration as mayor of this great city.

Lightfoot also said she would be “prioritizing” minority journalists — one Twitter user pointed out this did not mean the Chicago mayor was “excluding” white reporters. This was probably a poor method of damage control more than anything else.

Prioritizing not excluding, in her words 😏👇👇👇 pic.twitter.com/W4Q7ZVw9WZ

Such a blatant display of racism is unbecoming of an elected official, or any citizen of good moral character.

Public servants ought to make themselves available to all questioners, regardless of race, unless that questioner is conducting themselves improperly (looking at you Jim Acosta).

Lightfoot will probably try to depict herself as a hero, winning a decisive victory in a conflict that could result in identity politics occupying a hegemonic position in American life. In reality, she’s a woefully ineffective mayor that has lavished herself with luxury and self-adulation while her city crumbles.

If nothing else, it’s nice to see the mainstream media unite around a progressive for once. The journalism industry has always been toxic, but it’s clear that there are still some wisps of integrity when their jobs and voices are on the line. Maybe now they’ll understand how we feel.

Did AZ Auditors Really 'Backtrack' on Claim Files Were Deleted, as AP Reported?