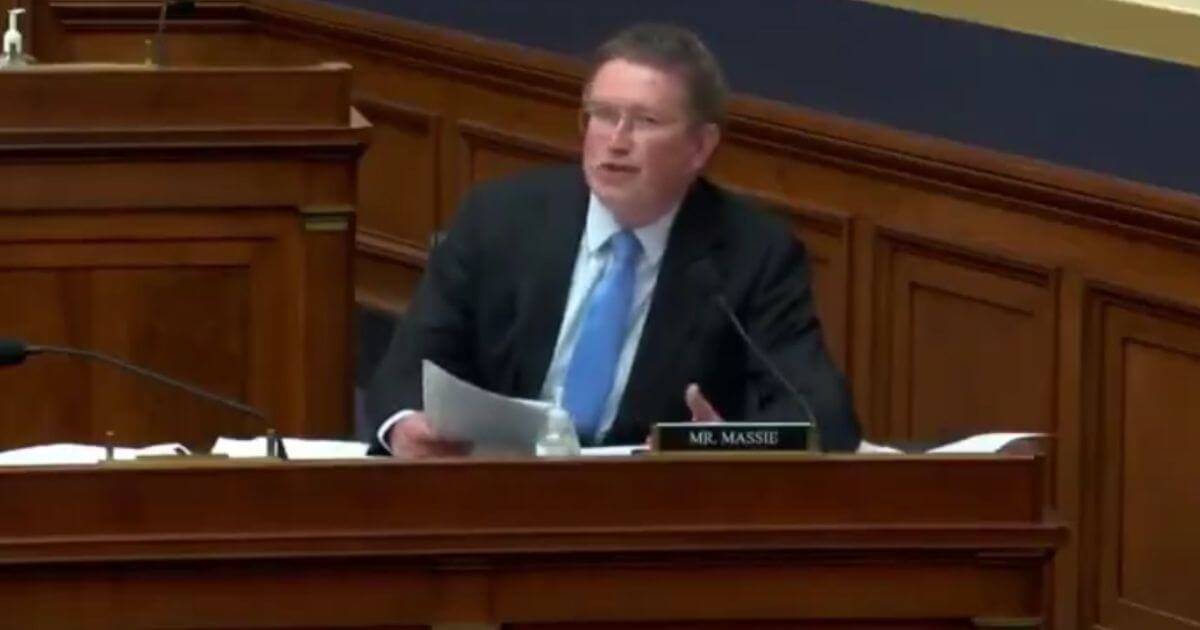 Republican Rep. Thomas Massie of Kentucky shredded the Democrats’ narrative on gun control Thursday, pointing out that gun control laws in liberal states and cities actually harm minority Americans while everyone else chases the false notion that voter ID laws are racist.

While speaking before the House Judiciary Committee about the issue, Massie unloaded on the false notion that making it more difficult to purchase a firearm makes anyone more safe, while also arguing that such laws in many cases make it cost-prohibitive for minorities to defend themselves.

Massie chastised his Democratic colleagues in the House over attempting to label voter ID laws as racist while demanding gun buyers — especially those who are poor, or black and Hispanic — provide not only identification, but prove that they are not criminals before they can exercise what he called a “fundamental human right” to own and carry guns.

Massie in fact declared, rightly so, that gun control laws only benefit two groups of people: criminals and the wealthy elite.

Massie attacked the so-called “Charleston loophole,” noting that deranged killer Dylann Roof ultimately would not have ever been prevented, under current laws, from purchasing a gun. Meanwhile, the flawed system which let him slide through the cracks can and does affect minorities disproportionately.

“Don’t use a tragedy of as an example that doesn’t apply,” Massie said about the Democrats’ approach to gun control, also begging to those watching, “Fact check me on this.”

Yesterday, gun-grabbers in the House Judiciary Committee held a hearing to advance their gun control agenda. I used this opportunity to remind Judiciary Democrats that their policies create “victims of gun control.” pic.twitter.com/YvWHCecqDN

“The mistakes [of the FBI criminal background check system] overwhelmingly affect minority males. People tend to have similar names in their racial and ethnic groups. Hispanics have names similar to other Hispanics, blacks have names similar to other blacks,” he said. Massie shared that someone with no record with a name similar to a criminal might be placed on hold for no other reason than they share a common name with an unsavory person they’ve never met.

Massie deemed such law-abiding people as “victims of gun control.”

Massie then attacked Democrat-run cities in a monologue that laid out why gun control laws harm minority Americans. He further made the Republican Party’s position on the Second Amendment crystal clear.

“Now, there are some places where they say, ‘Well if you have a good reason, we’ll let you have a gun.’ This is where you see the most racial discrimination. In Los Angeles County, where about 50 percent of the population is Hispanic, they only get about 6.5 percent of the gun permits, women about 7 percent and blacks 5 percent,” he noted.

“But nationwide, where people can get a permit generally without having to demonstrate such a need, 30 percent of permit holders are women, 13 percent are black. If you’re well-connected — if your last name is Biden — you can lie on the form. You can get a gun,” he said in an apparent shot fired at President Joe Biden’s son, Hunter Biden.

“If you need special permission in New York City, you can get a gun — if you’re wealthy and famous. But if you’re a poor minority, no. And here’s another problem with gun control that’s going to cause more victims of gun control,” he said. “Who are least able to take 16 hours of their lives and commit it to training and pay $500 for that training in order to exercise a basic right?”

“Liberals say, ‘Well, if you have photo IDs, and costs and trainings associated with voting, you’re disenfranchising the poor and the minorities,’” he noted.

“Well, what does this do when you require all of those things to exercise a basic, fundamental human right? It’s not just a Constitutional right, it’s a God-given right. It’s just restated there in the Constitution. So I would say — and there are even more things but I could disapprove here today with facts — but Republicans care about lives. We care about life, liberty and the pursuit of happiness. You cannot have liberty, you cannot have the pursuit of happiness without defense of life. And that’s what we stand for.”

Leftist Democrats, corporate America, sports leagues and the establishment media continue to portray election integrity laws as racist, but their rhetoric doesn’t square up with what the Democratic Party’s radical left-wing says about the sacred right to own firearms.

Democrats who enact strict measures on gun purchases and gun permits are only targeting those in their communities who are not among the wealthy or elite. These are places that so often claim to fight for equality, and which tend to be home to minority and impoverished Americans.

What do leftist Democrats say about creating an equal playing field for all Americans to defend themselves, their families and their property? Nothing, of course.

Criminals don’t follow gun laws, while obtaining guns and gun permits in gun-controlled areas is easy for people of means with connections.

But such laws make those same rights for impoverished people and law-abiding minorities cost-prohibitive. It’s difficult to argue with Massie that gun control laws are anything but discriminatory.

Halt to New Oil, Gas or Coal Projects by Next Year