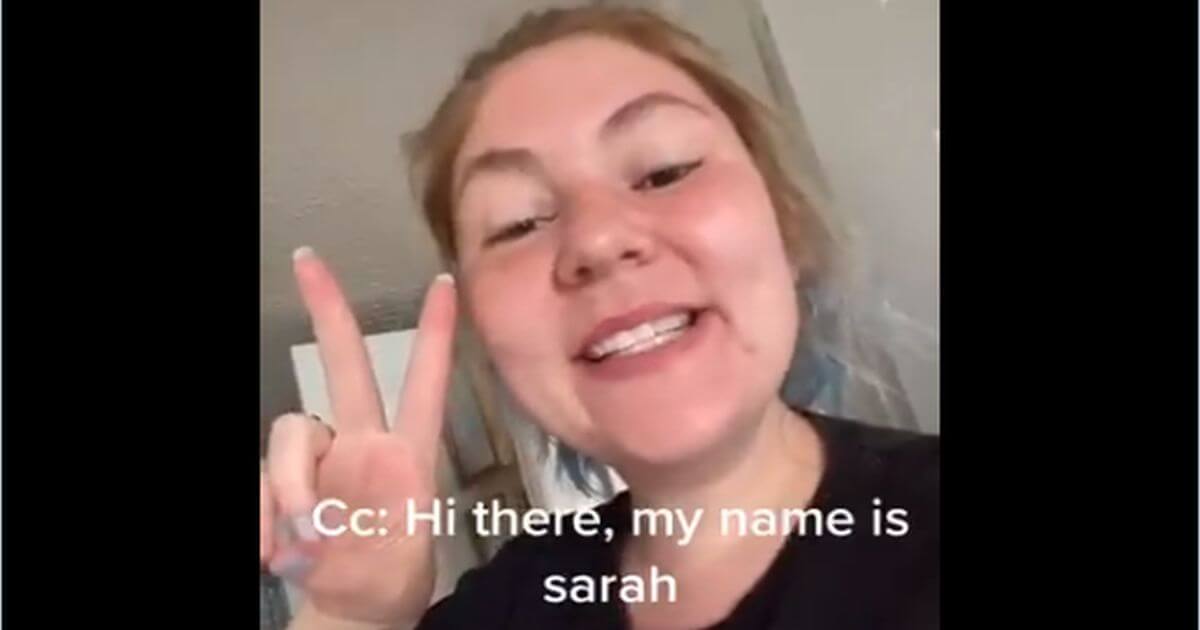 This lesson wasn’t properly grokked across the platform, apparently, when a mother named Justine Champion went viral for making her two children kneel and praise black women after Democrats won both Senate runoffs in Georgia back in January. You would have thought the backlash from that one would have served as an object lesson for the ages.

But no. Meet a woman who calls herself Sarah Lynes. It’s unclear if that’s her real name. I certainly hope not, because she’s taken woke white motherhood to the point where she believes she needs to actively train her son not to be “awful” because he’s a “white male.”

In a video posted on Saturday, which had already garnered over 1 million views as of Sunday morning, she discusses how she’s buying her new baby liberal books because if she doesn’t, apparently, his race and gender make him a potential danger.

“As you can see, my son is a white male,” Lynes says in the TikTok video.

“So here are some books I bought to help prevent him from growing up to be awful.”

First indoctrination lesson: “C is for Consent,” which she describes as “pretty self-explanatory.”

The book, put out by anarchist publisher AK Press, “teaches babies, toddlers, parents, and grandparents that it is okay for kids to say no to hugs and kisses, and that what happens to a person’s body is up to them.”

This is what every child is taught in school, mind you — but Lynes has given birth to a white male, so she apparently needs to be especially careful he doesn’t grow up “to be awful.”

Next up is a similar tome: “Will Ladybug Hug?”

“It teaches the same concept in a more childish way about a ladybug who is hugging his friends and he even has one friend who doesn’t like hugging,” she said.

Third book: “Only for Me,” which again has to do with kids feeling comfortable about their body and issues of consent. Again, the video strongly implies these are all book choices predicated on the fact her child is a white male and needs a proper information diet so he doesn’t become “awful.” All of them have to deal with issues of consent.

I don’t particularly want to cast aspersions on “Will Ladybug Hug?” — there’s at least a 75 percent chance it’s a better read than “White Fragility” — but if you make a TikTok video about educating your son to not be “awful” because of his race and his gender and the first three books we see have to do with one specific topic, there are assumptions we can make about your prejudices.

And then we get to books that’ll make this young white male a feminist — namely, “A is for Awesome,” with 23 inspirational women.

“I Clean Like Daddy,” meanwhile, teaches him that men do cleaning around the house, too.

This would already be dubious parenting if she hadn’t prefaced it with the fact this is all apparently necessary because her son is a white male.

The Daily Wire’s Matt Walsh pointed out why this goes beyond just silly wokeness:

Here’s an emotionally unbalanced woman who is bigoted against her own child.

I’m terrified for this kid. She is going to damage him in unspeakable ways.

This child is pretty clearly being used as a prop to show how woke this mom is without considering his worth as a human being. Already, he’s labeled as a “white male” — unable to understand the concept of consent, the fact that men need to do chores and the fact that his kind is generally not appreciated around this household.

Lynes — or whatever her real name is — likely won’t attain the same fame that Justine Champion did, and thank heavens for that. As the New York Post pointed out, Champion’s famous video — in which her children hailed black women, presumably because Stacey Abrams delivered the Senate seats to Democrats — made her a cringeworthy target of anyone with common sense.

What Lynes is doing is dangerously close to emotional abuse of what she says is her son, all so she can get plaudits from strangers on social media.

Twitter may feel like an echo chamber — but it has nothing on TikTok, where these sort of values fester until they bubble over into other forms of social media, where people are rightly appalled. The saddest thing is this likely isn’t the worst parenting you’ll see on the platform — but it’s darn near close.