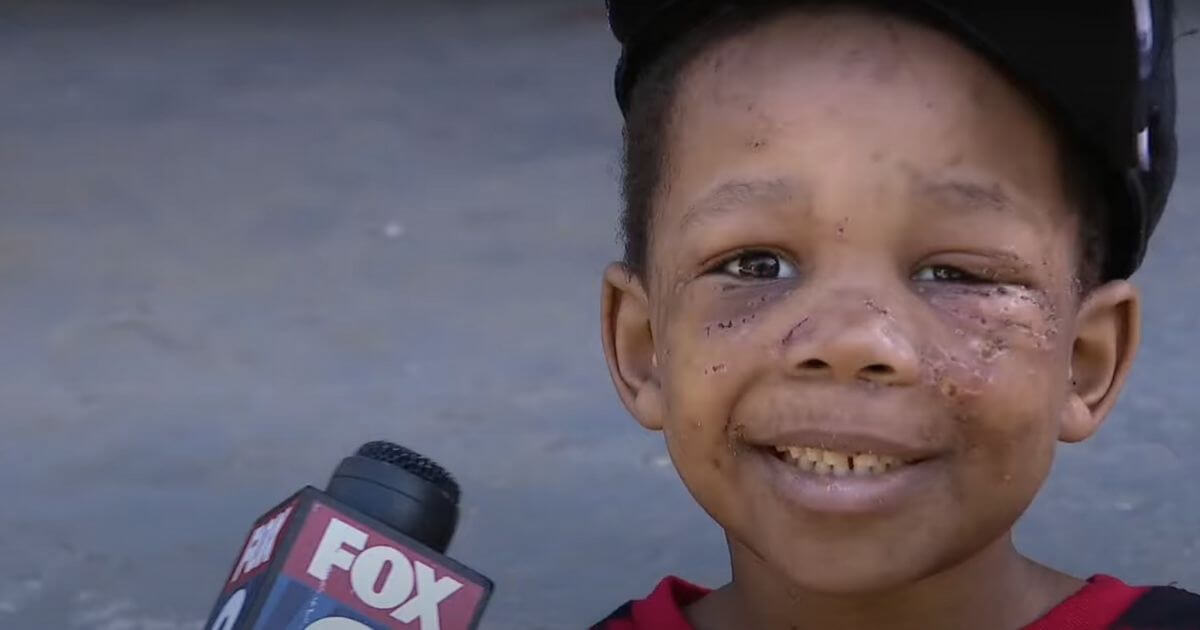 Monday, May 17, was not a good day for kids and dogs in Detroit, Michigan.

One 12-year-old boy heroically threw himself in the path of two attacking pit bulls to save his siblings. His leg was torn up, but after surgery, he’s doing well.

But 4-year-old Kaiden McCray was attacked the same day in a different part of the city by another loose dog. The dog went after his face, leaving the boy with much worse injuries.

According to WJBK-TV, the dog was a mastiff shepherd — which is typically a cross between an English mastiff and a German shepherd: both large, powerful breeds.

The loose dog somehow found his way into the yard where Kaiden was playing with some relatives and attacked the young boy.

The dog would not let go of the 4-year-old until Kaiden’s brother, 11, and cousin, 20, pulled the dog off of him. Kaiden’s mother, Jasmine Burt, didn’t realize just how serious the attack was at first.

“I get a phone call, ‘get to the hospital ASAP, he’s been bitten,’” she said. “I’m assuming just a re — regular dog bite and when I got there, he was just covered in blood and barely responsive.”

Several surgeries and a week later, Kaiden is improving, but the poor child still has a long way to go, both physically and psychologically.

Doctors are most worried about Kaiden sustaining PTSD from the attack, though his eye was severely damaged, as well.

“The facial doctors say that they’re just worried about his eye healing up because the dog damaged something behind his eye,” Burt said. “So they’re — they’re just watching that to make sure his vision is still intact.”

Burt has started a GoFundMe to help cover her son’s medical and future therapy costs.

“[A]nyone who knows him knows that he is a ball of light with an infectious smile,” the page reads. “He is the sweetest kid you’ll ever meet unfortunately he was viciously attacked by a dog Monday evening while visiting family.

“He underwent surgery to have extensive injuries repaired on his face, head, and leg. He has also suffered psychological trauma. He will need continued medical care to Include therapy & several rounds of Rabies shot.”

While Detroit Animal Care and Control thought it had located the dog, it ended up not being the one that bit Kaiden.

Since animal control has not yet been able to locate and quarantine the animal, Kaiden will also have to undergo a series of rabies shots.

The dog is not believed to be a stray, and Burt has asked that the owner “do the right thing” and turn over their dog.

“I would just ask him to give the dog up,” she said. “Like is your, is your dog more valuable than my son’s life? Like when it comes down to it, it’s a dog. Get a new dog. I can’t get a new son.

“If he hadn’t made it, you know what I mean? I can’t replace him, you can replace that dog.”

While there have been over 160 dog bites reported in Detroit so far this year, the majority of the reported bites (80 percent) were from owned dogs, not dogs that were strays, so authorities are asking dog owners to please ensure their pets are properly contained.

Sen. Warren Plans to Triple the Budget of the IRS to Go After The "Wealthy," But Little Guy Likely Hit as Well

Rand Paul's Wife Sends Simple Message to Those Who Threatened Their Home: 'We Have Guns'