Says Ryan ‘Has No Clue’ 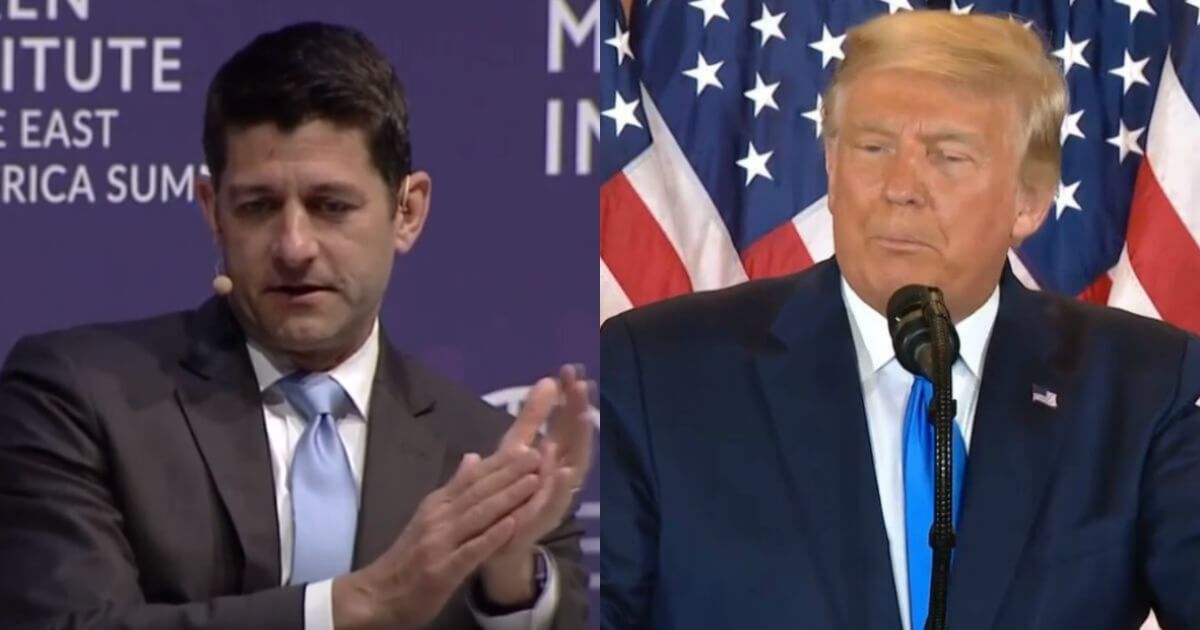 Former President Donald Trump released a statement Thursday firing back at former House Speaker Paul Ryan, who had criticized him in a speech earlier in the day.

In the statement, Trump called Ryan a “RINO” and said he was “a curse to the Republican Party.”

“RINO,” which stands for “Republican in name only,” is a pejorative some in the GOP use to describe their fellow Republicans who, in their view, legislate like Democrats.

“Paul Ryan, who became a lame duck Speaker of the House, lost all vote-getting capability with the people he represented in Wisconsin, and was the single biggest factor, other than Romney himself, for the monumental Romney/Ryan loss in the Presidential race of 2012 (I got more votes by far, 75M, than any sitting president in history!),” Trump said.

“[A]nd he is now speaking to other Republicans telling them how to win elections. Interestingly, I was in the Great State of Wisconsin when they booed him off the podium—I literally had to come to his rescue.”

In the 2012 presidential race, Ryan, then a Wisconsin congressman, ran for vice president on a ticket with Mitt Romney, a vocal Trump critic who is now a Utah senator. They were defeated by then-incumbent President Barack Obama.

According to a March 2016 USA Today report, then-Speaker Ryan was booed by a crowd when Trump mentioned his name at a rally in Ryan’s hometown of Janesville, Wisconsin, surprising Trump himself.

“Your new speaker, how do you like Paul Ryan, how you like him?” Trump reportedly asked the crowd, who responded with a “chorus” of boos.

Thursday’s statement was not the first time Trump criticized Ryan by calling him a “lame duck.”

After Ryan made comments critical of Trump for the book “American Carnage” by Politico’s Tim Alberta, Trump tweeted similar insults on July 12, 2019.

“Paul Ryan, the failed V.P. candidate & former Speaker of the House, whose record of achievement was atrocious (except during my first two years as President), ultimately became a long running lame duck failure, leaving his Party in the lurch both as a fundraiser & leader,” he said in a series of tweets.

In his Thursday statement, the former president said that “Ryan should instead be telling them how to stop the cheating of elections and that we would have won if Republican leadership fought the way the Democrats did.”

“Paul Ryan has been a curse to the Republican Party,” Trump said. “He has no clue as to what needs to be done for our Country, was a weak and ineffective leader, and spends all of his time fighting Republicans as opposed to Democrats who are destroying our Country.

“As a Republican, having Paul Ryan on your side almost guarantees a loss, for both you, the Party, and America itself!”

Trump’s words came in response to a speech Ryan gave Thursday night at the Ronald Reagan Presidential Library in Simi Valley, California, where, without mentioning Trump by name, Ryan suggested the party needs to move on from the former president.

“If the conservative cause depends on the populist appeal of one personality, or on second-rate imitations, then we’re not going anywhere. Voters looking for Republican leaders want to see independence and mettle,” Ryan told his audience, according to reporting from CBS News and The Washington Post.

Ryan then made who he was referring to clearer through his next set of words. “They will not be impressed by the sight of yes-men and flatterers flocking to Mar-a-Lago,” he said.

While Ryan did not mention Trump’s name directly when criticizing him, he did so while crediting him for the pre-pandemic economic growth the country saw during his administration.

“To his credit, Donald Trump brought many new voters into our party,” he said, according to CBS News.

However, Ryan expressed “deep dismay” at how Trump’s presidency came to an end, apparently referring to the fight over the November election, the Jan. 6 Capitol riot and Trump’s subsequent impeachment.

“It was horrifying to see a presidency come to such a dishonorable and disgraceful end,” he said.