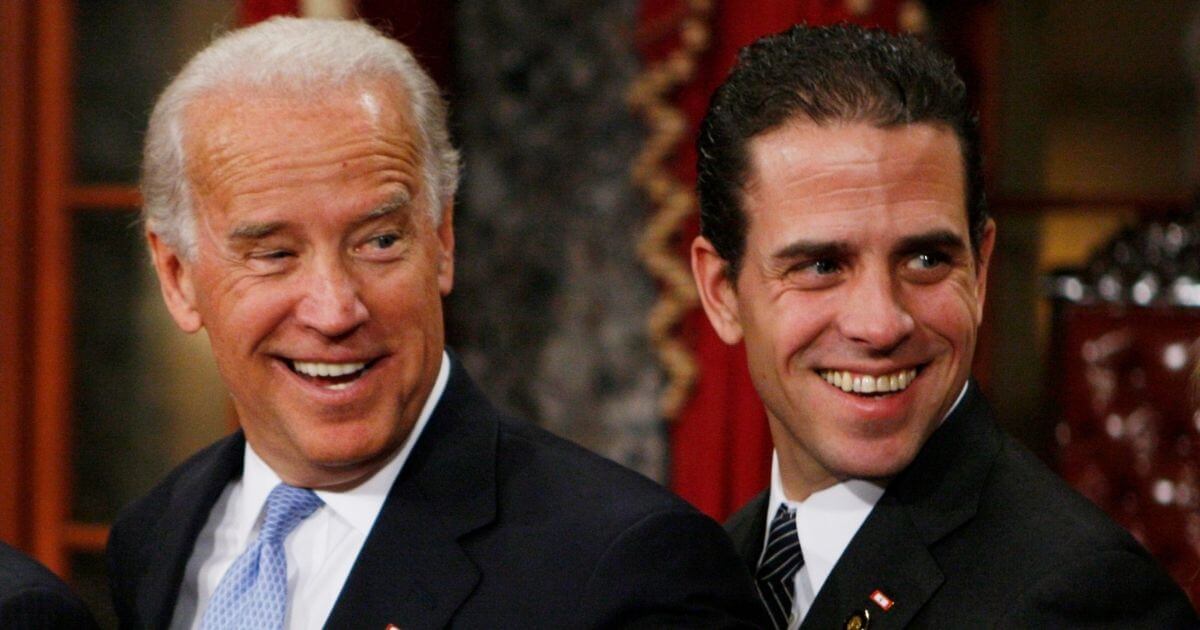 Hunter Biden used anti-black racial slurs and accidentally sent an explicit picture when texting with his attorney in 2018, according to a report, and the news comes just a week after his father decried racism while speaking in Tulsa, Oklahoma.

Apparently, President Joe Biden didn’t get his own house in order before lecturing a country he said was dogged by the threat of systemic racism.

Would you expect anything different from the Biden family?

“Folks, we can’t — we must not give hate a safe harbor,” Biden said in Tulsa while commemorating the centennial of the city’s darkest day in 1921, ABC News reported.

Pres. Biden, first sitting president to visit the historic Greenwood neighborhood to commemorate the Tulsa Race Massacre, holds a moment of silence for the victims.

“They deserve the dignity and they deserve our respect. May their souls rest in peace.” https://t.co/8tsvN79IHC pic.twitter.com/4tajdiVgRl

While Joe Biden was smearing the country as a racist cesspit on the anniversary of one of the most deadly acts of racial violence in American history, his son’s laptop — yeah, that one — held secrets about Hunter Biden’s apparent fondness of speaking in ebonics and using the N-word, The Daily Mail reported.

“How much money do I owe you … n**** you better not be charging me Hennessy rates,” Hunter Biden reportedly wrote in a text to his attorney on Dec. 13, 2018. According to messages provided by the outlet, Hunter clarified that he had “just made up that phrase” when referring to the “Hennessy rate.”

Hennessy, a relatively expensive brand of the cognac variety of brandy, and is often negatively connected to black American culture. Meanwhile, Mesires is said to have charged Hunter $845 per hour.

Make what you will of that. But Hunter Biden, per the texts, didn’t finish conversing with his lawyer by repeating the stereotype that black America is fond of brandy. He used more language you’d expect to hear on a rap album, and not see on the computer hard drive of the privileged son of a high-profile white Democrat.

Per the messages obtained by the Mail, the pair continued to text. Hunter Biden reportedly berated the attorney over his “lineage,” and at one point wrote: “That’s what [I’m] saying ni –.”

The son of the then-former vice president went on to send Mesires what the Daily Mail said was a sexually explicit image, apparently of himself. He quickly apologized. Apparently, George Mesires’ first name was mixed up with a woman in Hunter’s phone with whom he felt comfortable sending such images to.

“Why are you so tan?” Mesires asked, according to the Mail.

“I’m sorry for sexting you accidentally that was meant for another friend named Georgia,” Hunter fired back in a message the outlet reported was confirmed to have come from the then-48-year-old.

The Mail also shared another text message exchange in which Hunter Biden reportedly discussed his genitals and again used a racial slur. In January 2019, Mesires appeared to message Hunter Biden that he could turn to him and God for “unconditional love.” That’s when Hunter Biden responded with a comment about his private parts, according to the Mail.

“And I only love you because you’re black,” he reportedly said.

“It’s so annoying when you interject with frivolity,” Mesires, who is a white man, responded, according to the outlet.

Joe Biden goes around constantly accusing white America, and more specifically, conservative white America, of continuing a system of oppression, privilege and even white supremacy. If the messages shared by the Mail from the president’s son are true and accurate, and we have every reason to believe that they are, Biden wasn’t even able to reach his own son.

If Joe Biden would like to continue to masquerade as a civil rights icon, it might be prudent for him to at some point publicly address his adult son’s use of racial slurs — among other things.

Rubio Officially Has Challenger for His Third Senate Term