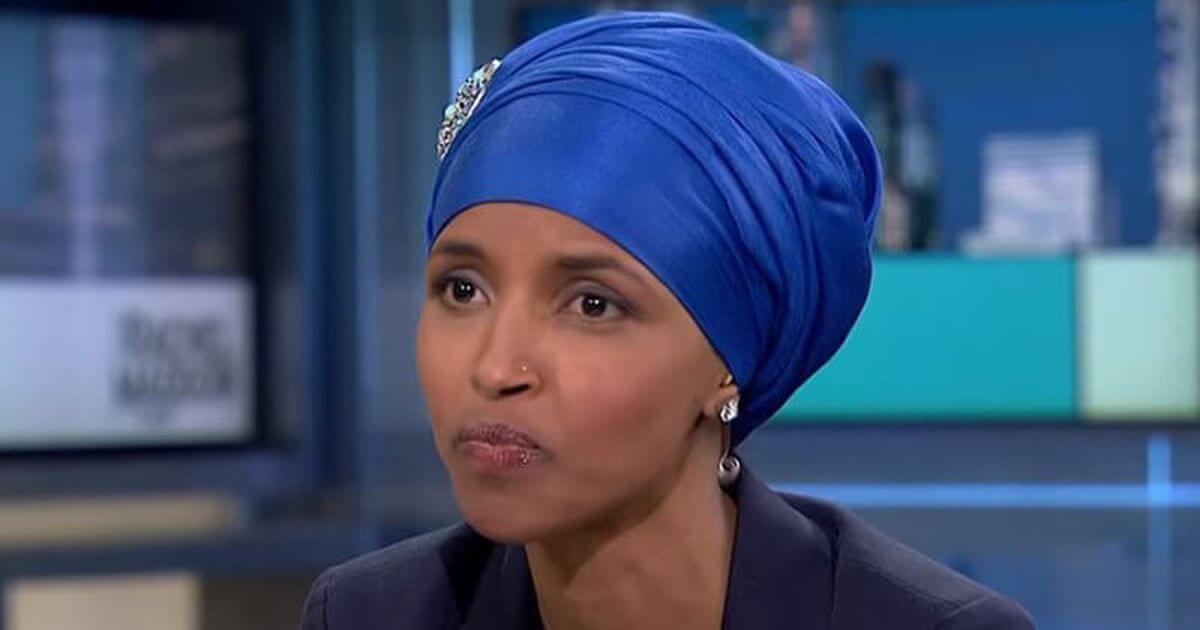 Democratic Rep. Ilhan Omar of Minnesota, who this week infuriated seemingly everyone, appears to be making some allies abroad.

Those allies aren’t exactly the kind of people one would expect a sitting member of the House of Representatives to pull into her orbit, but then again, Omar isn’t your average lawmaker.

The congresswoman managed to elicit a statement from the Islamic terrorist group Hamas on Friday, days after she made many of her colleagues and fellow Americans livid when she broadly portrayed both democratic governments and international terror groups as war criminals.

“The remarks made by US congresswoman Ilhan Omar are very peculiar; she equated between the victim and the executioner when she treated the resistance of the Palestinian people, the Israeli crimes in Palestine, and the US aggression in Afghanistan as an equal footing,” Naim said.

Sure, there was some biting criticism. Terrorists can be a tough crowd. But the terror group’s PR department also shared praise for the Muslim-American lawmaker.

“Hamas highly appreciates Omar’s stances in support of justice and the rights of the oppressed around the world, foremost among them is the just rights of the Palestinian people,” Naim said.

“However, it is unacceptable to make such an unfair comparison, which contradicts with basic norms of justice and international law,” he added.

Naim went on to portray Palestinians living in Israel as victims of an occupying regime.

“The Palestinian people have been living under the Israeli occupation for more than seven decades, during which they have experienced unbearable suffering and against whom heinous crimes were committed,” he said.

“The Palestinians have remained steadfast in their struggle for their freedom and independence, offered every possible chance to make a just peace, and made several concessions to regain their rights through peaceful means within the context of international legitimacy.”

Omar on Monday accused the U.S., Hamas, Israel, Afghanistan and the Taliban of committing “atrocities” in a screed that left some angry, and others scratching their heads, during a conversation in which she essentially put all parties on an equal footing while speaking with Secretary of State Antony Blinken.

“So in both these cases [of Israel and Afghanistan], if domestic courts can’t or won’t pursue justice, and we oppose the [International Criminal Court], where do we think the victims of these supposed crimes can go for justice? … What justice mechanisms do you support for them?” she asked the secretary of state.

Omar shared a snippet of their conversation online and added a comment.

We must have the same level of accountability and justice for all victims of crimes against humanity.

We have seen unthinkable atrocities committed by the U.S., Hamas, Israel, Afghanistan, and the Taliban.

I asked @SecBlinken where people are supposed to go for justice. pic.twitter.com/tUtxW5cIow

“We must have the same level of accountability and justice for all victims of crimes against humanity. We have seen unthinkable atrocities committed by the U.S., Hamas, Israel, Afghanistan, and the Taliban. I asked @SecBlinken where people are supposed to go for justice,” she commented.

Omar didn’t just upset Hamas with her remarks. She also upset her Jewish Democratic colleagues in the House, who demanded she clarify why she would place “the US and Israel in the same category as Hamas and the Taliban.”

We urge Rep Omar to clarify her words placing the US and Israel in the same category as Hamas and the Taliban pic.twitter.com/KfcnmpLRO6

Omar, of course, responded by attributing criticism of her to Islamaphobia.

It’s shameful for colleagues who call me when they need my support to now put out a statement asking for “clarification” and not just call.

The islamophobic tropes in this statement are offensive. The constant harassment & silencing from the signers of this letter is unbearable. https://t.co/37dy2UduW0

On Monday, the congresswoman drew the ire of conservatives, a number of Democrats and Hamas, the terrorist group which spent last month firing thousands of rockets into Israeli cities in order to further its cause.

The group’s mission is to wipe Israel off the map. While Hamas might not see Omar as being fully onboard with the destruction of the state of Israel, the group signaled it sees in her a potential ally. Hamas has few open allies in Washington.

Buried in the terror group’s statement condemning Omar’s equating of Hamas to the U.S. and Israel was also a bit of praise that was not offered to her by her other critics.

Hamas signaled that while it understands the Democrat might not be an open cheerleader for the group’s fanatical views, both parties at least share some common ground.