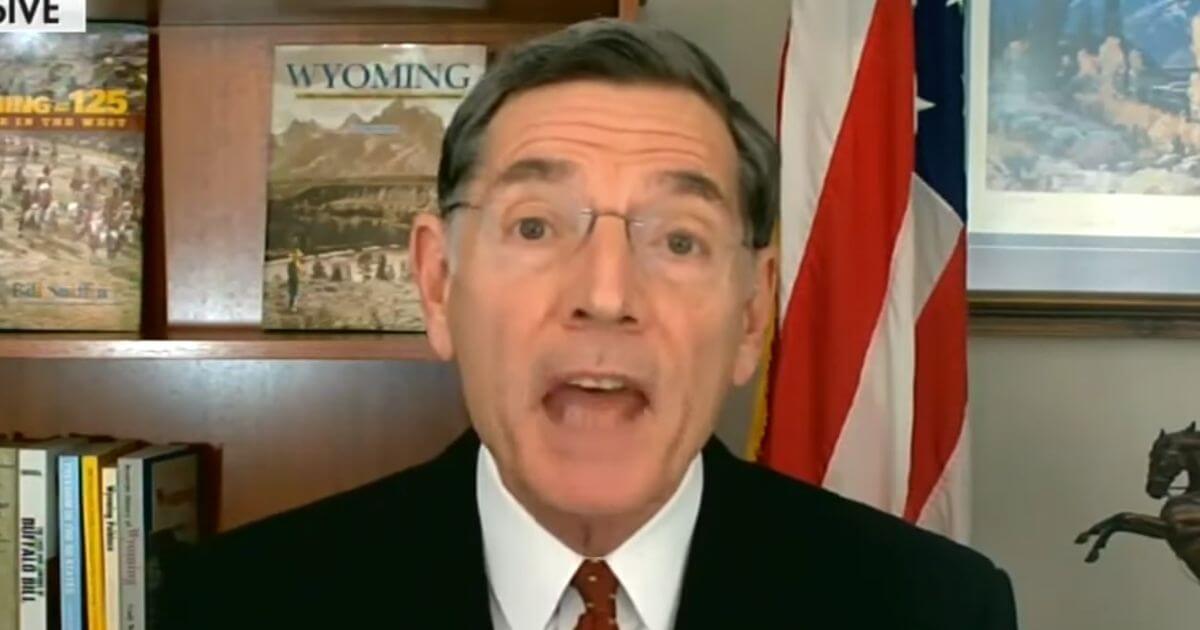 A top Republican senator says that if Republicans harness their power, President Joe Biden can be what he termed a “one-half-term president.”

Republican Sen. John Barrasso of Wyoming spoke to the Ripon Society last week. He said that the 2022 elections will be an outstanding opportunity for the Republican Party to break the Democratic lock on power with Democrats controlling the White House, Senate and House.

“I’m looking forward to a very successful 2022,” Barrasso said, according to The Hill.

“I want to make Joe Biden a one-half-term president, and I want to do that by making sure they no longer have the House, Senate and White House,” he added.

Laura Mengelkamp, Barrasso’s communications director, told The Hill that Barrasso is not seeking to remove Biden from power but rather undercut the president’s ability to ram home one-party initiatives by using parliamentary procedures that leave the GOP on the sidelines.

“Sen. Barrasso’s remarks discussed his work to make sure Republicans take both the Senate and House in 2022, which would be the best way to effectively stop President Biden from moving his liberal agenda post-midterms, and position Republicans to win the White House in 2024,” Mengelkamp said.

Barrasso said that Democrats themselves expect to lose power in next year’s elections, citing an anecdote about an unnamed Democratic senator and independent Sen. Bernie Sanders of Vermont, according to Fox News.

“One of the Democrat senators told me that he said, ‘Look, we can do all this spending and taxes, but we’re going to lose the House or the Senate, or maybe both in two years.’ To which Bernie [Sanders] said, ‘Oh, we’re going to lose them. We’ve got to do everything now. This is our only chance!’” Barrasso said.

“Joe Biden will never veto a bill. He’ll go down in history as a president who has never vetoed a bill because he will sign whatever Chuck Schumer and Nancy Pelosi put on his desk, period. He’s not going to get anything he doesn’t agree to sign,” Barrasso said.

“He’s just along for the ride right now. And they’re running the show and their party is being driven further and further to the left. When you have a party that is proposing to defund the police and have less security in our country, that’s a story that writes itself,” he said.

Barrasso, who chairs the Senate Republican Conference, said that instead of moving to the middle in the evenly divided Senate, Democrats have moved away from Republicans.

“There’s a 50-50 Senate, which should be a mandate to move to the middle. Instead, they seem to be heading as far to the left as they can,” Barrasso said.

He said Democrats are too busy pushing bills that they use as campaign talking points to focus on real legislating.

“This is the month that John Thune calls ‘Senator Schumer’s designed-to-fail month,’ because everything he’s bringing up is a hot button issue for them, and we’re going to stop all of it,” Barrasso said.

“We did with the so-called Paycheck Fairness, which doesn’t really do what it says. You’re going to have gun legislation going after the Second Amendment. There’s a whole host of things they’re going to bring up in June and Schumer wants all of these to fail so then he can then say, ‘Look what they’re doing. They’re stopping the president. We need to overturn the filibuster,’” he added.

“All of this is intended to ramp up animosity against Republicans and get the Democrats all in line. They’re not in line now.”

Barrasso said that instead of spending trillions on Biden’s big-ticket bills for infrastructure and social issues, Congress should glean money from COVID-19 relief bills that has not been spent.

“There’s a lot of money out there,” he said, calling it “orphaned money from the first five bipartisan coronavirus relief bills that are pretty specific in how they need to be spent — and it’s never going to be spent.”

“We have to repurpose that. There’s a lot of money in the more recent Joe Biden coronavirus bill that is either unneeded or unrelated to coronavirus that is meant to basically pay off and bail out big cities,” Barrasso said.

“The money isn’t even going to go out for another couple of years.”