Biden’s Brain Breaks, He Misquotes Declaration of Independence Then Forgets the Rest 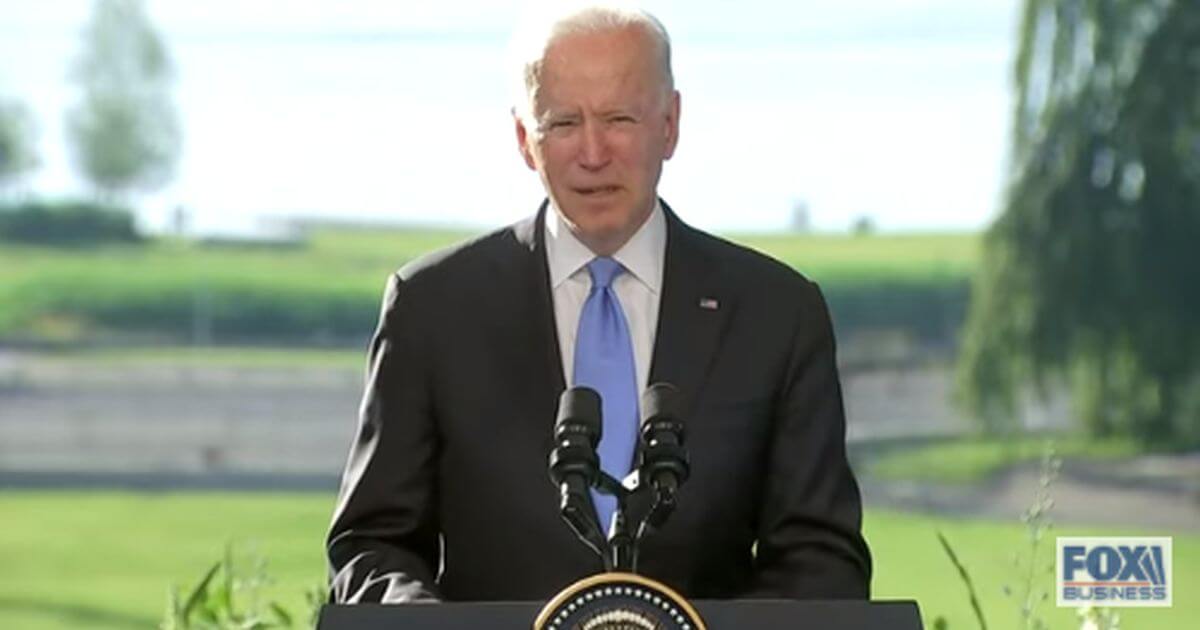 President Joe Biden’s brain failed him Wednesday during his latest attempt to quote the Declaration of Independence, although this time it occurred as Biden postured to reporters about how tough he was during an earlier meeting with Russian President Vladimir Putin.

Biden sat down with Putin for several hours in Geneva on Wednesday for a much-anticipated meeting of the two leaders. Confidence in Biden’s ability to go toe-to-toe with the Russian leader dropped significantly when it was announced Biden would not participate in a joint media briefing with the former KGB agent following the talks.

But at his own briefing, Biden portrayed the meeting as having been one where he talked tough and Putin listened.

Do you think the president spoke with vigor and tenacity during the meeting? If he did, he was spent by the time it was over.

Biden again gaffed during his solo media briefing: He again couldn’t remember the words to the Declaration of Independence, a document he has struggled at length to recall since last year.

Biden said he told Putin that “no president of the United States could keep faith with the American people if they did not speak out to defend our democratic values, to stand up for the universal and fundamental freedoms that all men and women have, in our view.”

“That’s just part of the DNA of our country, so human rights is gonna always be on the table, I told him. … It’s about who we are. How could I be the president of the United States of America and not speak out against the violation of human rights?” the president said.

“I told him that unlike other countries, including Russia, we’re uniquely a product of an idea. You’ve heard me say this before, again and again, but I’m gonna keep saying it. What’s that idea? We don’t derive our rights from the government. We possess them because we’re born. Period. And we yield them to a government.”

Biden then attempted to invoke the Declaration of Independence but failed as he’s done before, while also divulging that he criticized his own country while sitting with a man whose country has never once come close to placing value in human life.

“So at the forum, I pointed out to him … I will continue to raise issues of fundamental human rights,” he said. “Because that’s what we are, that’s who we are.

“The idea is, we hold these truths self-evident, that all men and women — we haven’t lived up to it completely, but we’ve always widened the arch of commitment.”

Biden once again misquotes the Declaration of Independence before forgetting the rest:

“We hold these truths self-evident that all men and women.” pic.twitter.com/ID5dtQ1Ifs

The line Biden was looking for was, “We hold these truths to be self-evident, that all men are created equal, that they are endowed by their Creator with certain unalienable Rights, that among these are Life, Liberty and the pursuit of Happiness.”

It eluded him on Wednesday in Geneva, just as it did in March 2020 during a speech on Super Tuesday.

“We hold these truths to be self-evident,” he said after series of surprising victories in the Democratic primary. “All men and women created by the go — you know the, you know, the thing.”

TBH “etc” from Joe Biden is an upgrade from March 2020 when he said, “We hold these truths to be self-evident. All men and women created by the you know, you know the thing.” https://t.co/WrRcMCOj2f pic.twitter.com/044bgqIbd6

The thing, yes. That “thing” is that all men and women were created by God and that their rights to life and liberty are in fact inalienable. Those rights are not a gift from the government but are divine.

Do you think Biden made that much clear to Putin without the use of flashcards, or without pivoting before conveying a lucid point to a tyrant about the values Americans hold so dear?

We can only hope so. The reality is, we don’t know what happened behind those closed doors in Switzerland.

We can only imagine.

Biden-Putin Summit Gets Off to a Chaotic Start as Unruly Journalists Scuffle with Each Other, Security Officials