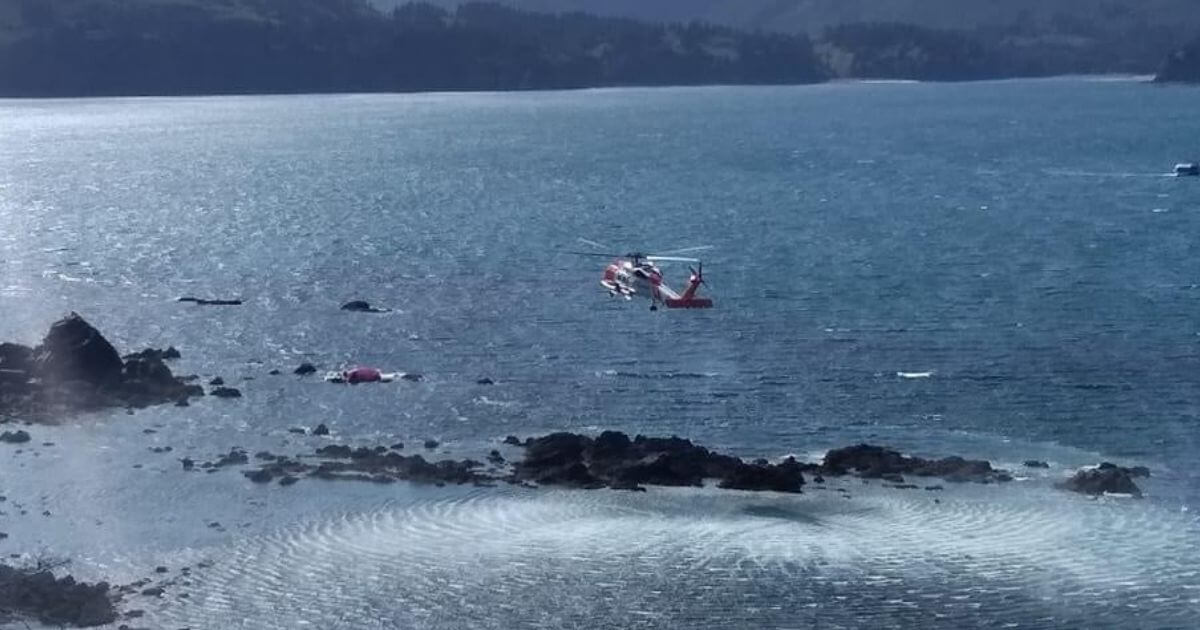 “It was the scariest day of my life,” Hollie Spence, a newly minted 30-year-old, said of her birthday this year. “I don’t think I’ll ever do something like this again.”

It started with the simple desire to spend her birthday relaxing with friends and ended up placing her in national news.

Spence, her roommate Lepa Sega and her roommate’s brother Nation Sega set out on what would end up being the adventure of a lifetime on Saturday.

They brought their two dogs, some snacks and some nonalcoholic beverages (an important detail).

They took to the shallow waters of White Sands beach in Kodiak, Alaska, and launched a large flamingo raft. Once aboard, they enjoyed the day, which was beautiful if a bit windy.

It was that wind that proved to be disastrous.

“If we get too far out,” Spence later said about her previous raft floats, according to CNN, “we notice right away and pull it back.”

The flamingo crew wasn’t entirely green: They’d done the same thing last year and enjoyed the outing. But this time, they got a little too far out and noticed a little too late that they were no longer in shallow water — but being pulled out into Monashka Bay.

After about an hour, the giant flamingo came to rest … against rocks. The spot was so treacherous that by the time help arrived in the form of the Alaska State Troopers and the U.S. Coast Guard, the partiers were in too dangerous a spot to be rescued by boat.

So a helicopter was called out, and all five (three humans and the two dogs) were hoisted to safety. The U.S. Coast Guard Alaska has since posted photos and video of the rescue.

“Our concern was that Alaska water is super cold right now, even going into summer — it could be a bad situation,” helicopter pilot Lieutenant Zach Farrell said, adding that they “headed out with a sense of urgency.”

“Alaska State Troopers and the #USCG worked together to determine that due to the treacherous circumstances, a helicopter hoist was the best option to bring these folks and their animals back to shore, safe and sound!” the U.S. Coast Guard Alaska posted to its Facebook page following the event.

Spence has also posted about the debacle, thankful for the safe close to their unintentional adventure, but also able to see the humor in it all.

“It was a little windy but I never thought in a million years we would be drug out so fast and so far,” she said. “It was a complete freak accident and we had to be rescued.”

“Y’all really are hero’s!” she commented on the U.S. Coast Guard Alaska’s share of the rescue video. “I am so thankful to y’all. I’m sorry if you didn’t want your face on National news but not sorry ? Because it sure is a story to tell, one in that hour I didn’t think I’d ever be able to tell.”

“I’m DYING!!!” she shared on her own page. “[H]ow did this happen !!! I thought we would never see the picture we took with #uscgkodiak because we didn’t get all of our hero’s name & weren’t sure where it would end up !

“The moment we walked into a restaurant downtown that night, People had already seen the picture that they posted on the Facebook page for USCG of Alaska! Not just KODIAK Coast Guard! Never in a million years did I think this would blow up like this!”

“I’m so thankful that I’m alive that I just really have to laugh about the worst and scariest day of my life !!”

As for the flamingo, the Coast Guard mentioned in the comments that it, too, was retrieved after drifting to a more accessible spot.

Whether or not its partying days are over, one thing’s for sure: It certainly helped make Spence’s 30th unforgettable.

Illegal Aliens Wanted for Murder of Americans Removed from 'Most Wanted' List, Search for Names Pulls a Blank

What If the Media Had Told the Truth?…5 Mainstream Media Lies for Which Trump Has Been Vindicated, and the Damage They Caused