All Hell Breaks Loose as Maize Hirono Gets Snippy with Ted Cruz, Inserts Herself to Accuse Him of ‘Mansplaining’ 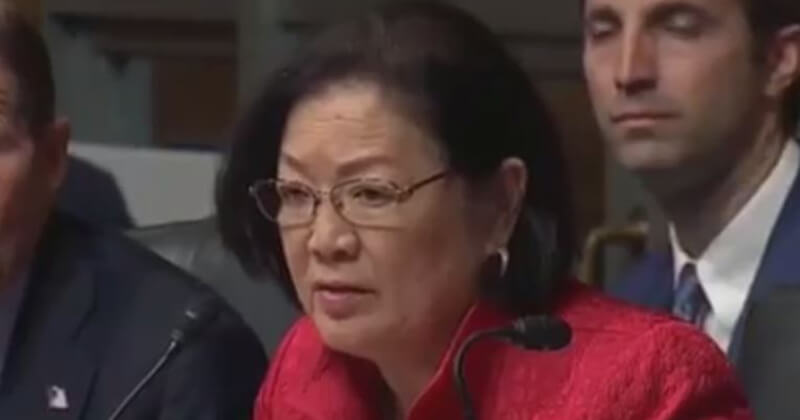 Ossoff is the youngest member of the Senate and arguably its least accomplished. He comes to Congress from an impressive career as a documentary filmmaker who managed to blow a 2017 special House election into which liberals across the country sunk an obscene amount of money because of its totemic value as the first major election after Donald Trump took residence in the White House.

While neither of Georgia’s freshmen Democrat senators had previously held political office, at least the Rev. Raphael Warnock came from a successful organizing background. Ossoff is kind of Sen. Michael Moore — that is, if Moore’s first film, 1989’s “Roger & Me,” flopped, nobody had ever heard of him, he decided to run for a House seat unsuccessfully and then landed in the Senate. That’s Jon Ossoff.

On Wednesday, Sen. Jon the Unready was given the gavel in the Senate Judiciary Committee during Judge Gustavo Gelpí’s nomination hearing to the U.S. Court of Appeals for the First Circuit. Sounds like a good opportunity for the 34-year-old Ossoff to get his feet wet.

Then, Hawaii Democratic Sen. Mazie Hirono, one of the upper chamber’s dafter members, made some ignorant comments about judicial originalism, GOP Sen. Ted Cruz of Texas pointed out how ignorant they were, Hirono accused Cruz of “mansplaining,” Cruz forced Hirono to say she didn’t actually mean what she’d said a few minutes earlier, and Ossoff and his gavel were left to moderate this back-and-forth with all the effectiveness of a pro-wrestling referee.

The kerfuffle was put into motion when Hirono noted that “there were a lot of questions asked of this nominee relating to originalism,” the judicial philosophy — favored by conservatives — that the Constitution should be strictly interpreted as written.

“The way I see it, this was an effort to get Judge Gelpí to acknowledge originalism as the only way to do either constitutional or statutory interpretation,” Hirono said.

“If originalism were applied, I think that Obergefell [v. Hodges], for example, that protects same-sex marriage, would not have been decided in that way. … If originalism were applied, I would say that really puts into jeopardy the decision in Roe v. Wade, which protects the woman’s right to choose,” she said. “So all of this effort to try to box this nominee in is seen for what it is, as far as I’m concerned.”

Cruz pointed out this wasn’t an argument against originalism, just an argument that “it would prevent outcomes that she supports.”

“It would prevent outcomes in cases like Obergefell and Roe v. Wade — and because she supports those outcomes, she doesn’t want judges who will follow the original understanding of the Constitution.”

He asked Gelpí whether he didn’t intend to follow the original intent of the Constitution when he ruled, which is what Hirono implied. This is when Ossoff first said Cruz’s time had expired, but he allowed Gelpí to answer; the judge said he’d apply “originalism in the cases where it is appropriate.”

“Do you agree with Senator–” Cruz said before Ossoff cut him off again and said his time had expired. Cruz noted that “this is a committee where we’ve had a little bit of comity, and I recognize Senator Ossoff is new, but we generally don’t have the chairman trying to jump in 30 seconds in –”

Ossoff interrupted again and threw it to Hirono, who definitely wasn’t going for comity.

“I would request that my colleague Senator Cruz not misstate, misstate what I’m saying and, you know what, all this mansplaining — please stop,” Hirono said.

Cruz asked Hirono what he’d mischaracterized, which had Ossoff banging his gavel at the Texas senator.

A voice was heard asking Ossoff whether he’s going to give any ruling on Cruz’s point of personal privilege — a procedural request that involves issues that directly relate to one’s character or words. Ossoff is asked repeatedly: “Mr. Chair? Mr. Chair? Mr. Chair?” Meanwhile, Hirono is silent.

“OK, so you’re not going to say how it was mischaracterized,” Cruz said.

Only then did Ossoff decide Cruz could ask his question. He already had, but he decided to elaborate: “I described what Senator Hirono said. I asked the judge if he agreed with her defense that he should not embrace originalism because it would not allow him to reach outcomes that she favored. She’s now come back and said that was a mischaracterization of what she said, and so I’m inquiring what is mischaracterized.”

“Mr. Chairman, very briefly, because otherwise, you know, the thing with my colleague is he always has to get the last word. And that is a fact,” Hirono responded. “But one of the ways that he mischaracterizes is that I do not object to originalism as applied because it results in decisions that I don’t agree with. I disagree with the way that the court proceeded and in some of the members of the court and how they proceed with originalism to get to the results that they want. So, that’s it.”

“Is it not accurate that you said that you thought originalism shouldn’t be followed because it would lead to a different result?” Cruz asked. “Is that not what you said just a few minutes ago?”

Hirono said no. “Well, the record is clear,” Cruz said.

Here’s what happened as things got testy:

For those inclined to watch the full thing unfold over nearly 10 minutes, Cruz tweeted the exchange along with an apt caption: “Today, Maize Hirono admitted the Democrat opposition to originalism is purely results based.”

Cruz wasn’t mansplaining, he was simply pointing out the obvious: Just because originalism mightn’t produce the results one of the Senate’s most liberal members wants doesn’t make it wrong.

That says more about the results themselves than it does about originalism, in fact.

And, as Hirono got herself more dug in, I felt genuinely sorry for Ossoff. No documentary filmmaker deserves this.