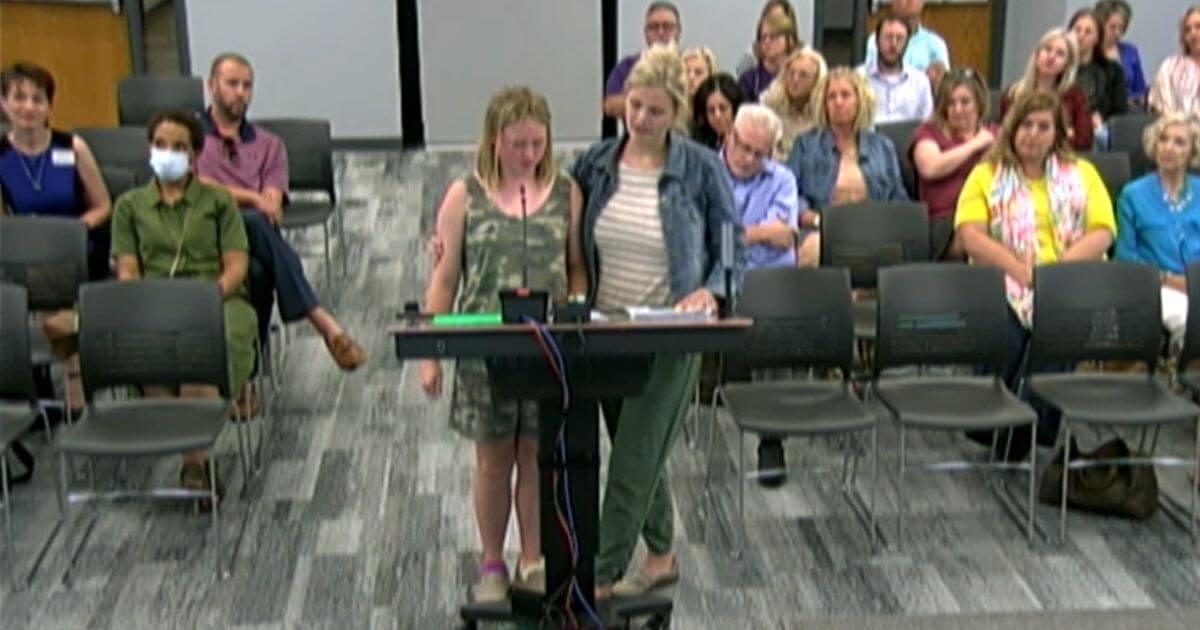 One brave girl from Fishers, Indiana, had some important questions for members of her local school board last week.

Fighting back tears, the girl explained to the board members how they have “failed [her] as a student.” Her comments can be seen starting around the 41:57 mark in a video on the Hamilton Southeastern Schools website.

“I have been in counseling as long as I can remember because I was adopted from foster care at age 4,” she said at the school board meeting on Wednesday.

“The things I’ve learned along the way are being challenged now when my science or math teacher is trying to teach me how to be emotionally — and why are they teaching me about sexuality and how to identity?” the girl said.

“I don’t want to hear about sexuality during class in front of other students because that should be a private thing. This should be left in the homes and between students and counselors or one-on-one conversations.

“This has been a very traumatic part of my past, and the more that the school focuses on sexuality, the more it affects me and my anxiety.”

Following that, she revealed that she had been accused of having “white privilege” by school staff members.

“I was told I have white privilege. How can a child born in an abusive, drug and alcohol abuse home who lost her entire biological family, that has experienced all forms of abuse and neglect, be privileged?” the girl asked.

“If you found a child at 15 months in a home with holes in the floor eating cat poop, would you consider them privileged? Just asking, because when I was told that, I was upset and cried myself to sleep.”

A quick look at the website of the girl’s school district confirms that far-left “equity and inclusion” propaganda is being disseminated to students.

Just as she said, this propaganda focuses on sexuality and anti-racism (which teaches about the supposed prevalence of “white privilege”).

An “Equity and Inclusion” web page on the district’s website offers various “Anti-Racism/Bias Resources,” presumably for teachers, students and parents to use for educational purposes.

One resource recommended by the district encourages educators to read a book by Ibram X. Kendi, a controversial scholar known for pushing the philosophy of “anti-racism.”

According to Kendi, you are either an anti-racist — a progressive political activist who agrees with Kendi’s vague redefinition of racism — or a racist. In his view, there is no in-between.

“What’s the problem with being ‘not racist?’” Kendi wrote. “It is a claim that signifies neutrality: ‘I am not a racist, but neither am I aggressively against racism.’ … One either allows racial inequities to persevere, as a racist, or confronts racial inequities, as an antiracist.”

In other words, vote for Democrats and radical socialist policies such as welfare redistribution — the very same policies that have impoverished the African-American community for decades — or you are a racist.

These are the sorts of ideas that Hamilton Southeastern officials push on their students.

Another resource offered by the district links to a video defending the political goal of equity, also known as equality of outcomes.

In its argumentation for the necessity of equity policies, the video uses a popular meme that supposedly shows how equality, or treating people as equals, is not good enough to address supposed systemic inequity.

Equality making sure they all see over the fence.
Equity give them different boxes.#ICE18 pic.twitter.com/Nujv3OS36B

Instead, the proponents of equity argue, in order to reach true equality of outcomes, minorities must be afforded special privileges in order to address the unique disadvantages they face.

Not only is such thinking illogical, but it is also deeply racist due to the fact that it treats minorities as helpless children in need of government aid.

Moreover, as conservative commentator Ben Shapiro explained in a Feb. 2 Op-Ed, such reasoning is faulty because it fails to take into account group differences.

“This philosophy is both idiotic and perverse. It’s idiotic because all human groupings — literally all of them — will result in differential outcomes. Draw a line down the middle of any room in random fashion and the result will be unequal income distribution, criminal records, educational histories,” Shapiro wrote.

“This philosophy is perverse because it attributes malice to those who have none; it fosters policy that actively discriminates, supposedly in order to alleviate unproven discrimination.”

Indeed, when it comes to the Hamilton Southeastern Schools, this philosophy certainly attributed “malice” to someone who has none.

A girl who has suffered abuse and neglect was called “privileged” just for being white.