She Would Have Been Executed 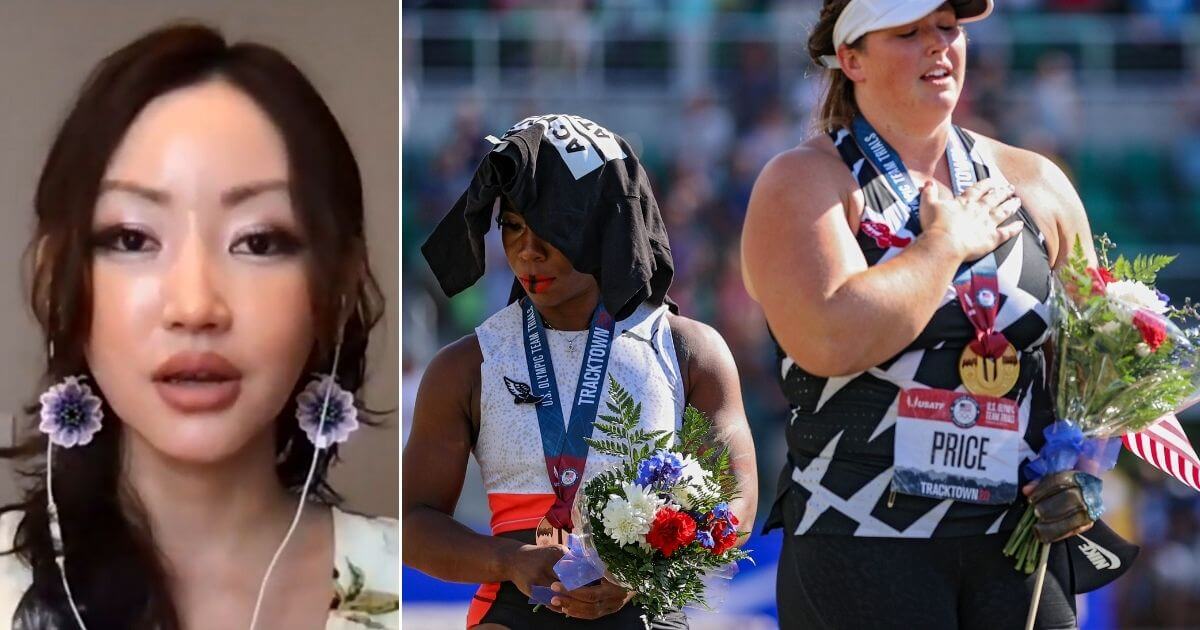 A human rights activist who escaped slavery in North Korea had harsh words Thursday for spoiled Olympian Gwen Berry, who turned her back on the American flag during the playing of the national anthem at the U.S. track and field trials.

Yeonmi Park said Berry likely would have been “executed” for disrespecting the flag of her former country.

Berry was in Eugene, Oregon, on Saturday to vie for a spot to represent the United States at the Summer Games in Tokyo. She succeeded in qualifying, placing third.

In the ceremony that followed, however, Berry turned away when she heard “The Star-Spangled Banner” and covered her head with a shirt that read “Activist Athlete.”

She later went as far as to describe her being forced to hear her country’s national anthem as a “set up.”

Berry, who is black, has since said the song represents a system of racial oppression, pointing to a debunked reading of Francis Scott Key’s work.

Her antics took all of the attention away from the two other qualifying athletes — first- and second-place finishers DeAnna Price and Brooke Andersen.

Both women showed respect for the American flag and anthem after outperforming Berry. Meanwhile, the supposedly oppressed third-place finisher sucked all of the air out of the room.

Some oppression there, right?

Berry is not oppressed, nor does she know what true systemic oppression even looks like, according to Park, who defected from North Korea in 2007. Park joined Fox News on Thursday morning to lay into the bratty American hammer thrower.

“In North Korea, people who are actually oppressed don’t even know they’re oppressed,” Park said. “The fact that she’s complaining about oppression and systemic racism — she does not understand that she’s so privileged.”

Park told “Fox & Friends” that if Berry had tried a similar stunt in North Korea, she probably wouldn’t be alive to talk about it.

“If she was North Korean, not only herself going to be executed, including eight generations of her family going to be sent to political prison camp and execution,” Park argued. “So the fact that going there and refusing to represent the most tolerant, the land of the free, it’s unthinkable.”

“I was a slave. I was sold in China in 2007 as a child at 13 years old. The people actually going slavery under Chinese Communist Party in North Korea. There is actual injustice,” she added.

“And the fact that she’s complaining about this country, the most tolerant country — she doesn’t really understand, I think, history.”

Park concluded that while so many people in her home country and others are “dying to come to America at this very moment,” people such as Berry are clueless about those who struggle to simply stay alive at the mercy of oppressive governments and cultures.

“I just hope they go to North Korea, China and see how humans are being oppressed,” she said. “And they will truly understand how valuable the freedom that we have is.”

The point is not that the U.S. should compare itself to North Korea. The point is that people in this country have grown so entitled, so spoiled and so out of touch that they are able to convince themselves of their own victimhood even as they excel in areas where others couldn’t dream of.

How many American women dream of representing their country in the Olympics?

Berry will be given that shot after her third-place finish in Oregon on Saturday. She will be headed to Tokyo ahead of many other athletes who would love nothing more than to proudly represent their country abroad.

Berry is not oppressed, and those who are criticizing her despicable actions are not oppressing her.

Perhaps the “activist athlete” should look at how minorities and women are treated abroad before she unleashes hateful screeds against the country that is giving her a chance that not many people get.

Is our country perfect? No. But the very fact that Berry made herself a household name by showing scorn for the United States over its perceived inequities is evidence that she has more of an entitlement issue than anything else. She’s ungrateful, to say the least.

According to Park, had she pulled such a stunt in North Korea, she would not be alive right now to talk about it.

Perhaps Berry should reflect on her privilege while watching the games on TV — like most Americans will be doing in the coming weeks.

With her actions, she has thrown away the right to represent a country she apparently despises.