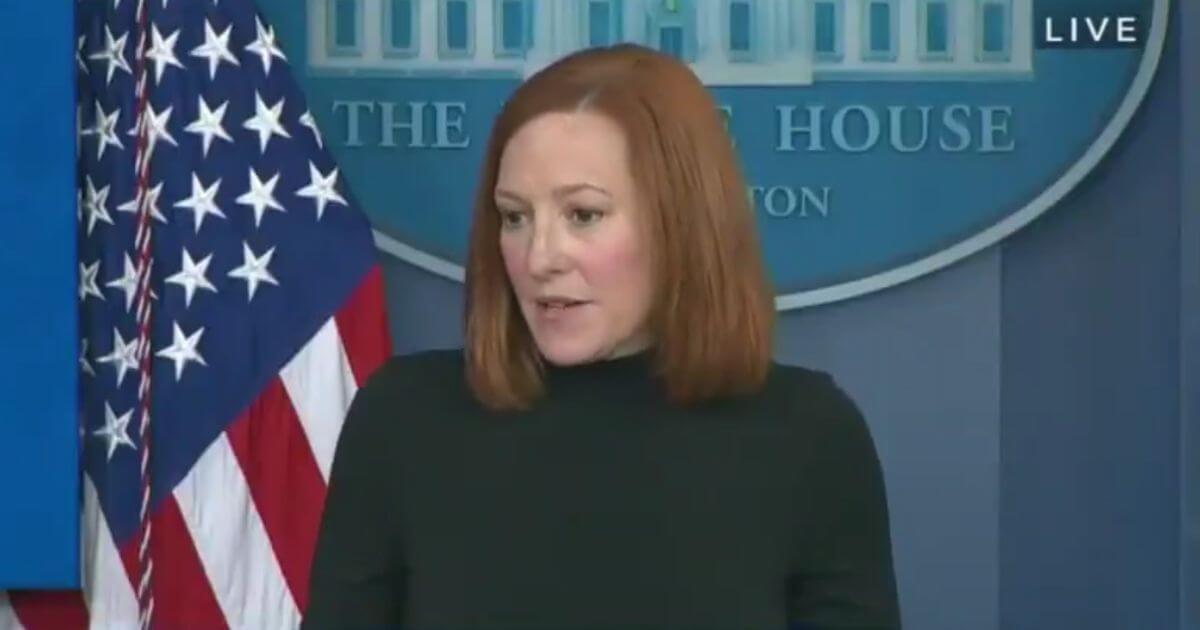 White House press secretary Jen Psaki chided the media on Friday for “overreading into” President Joe Biden’s abrupt response after a series of questions on the U.S. withdrawal from Afghanistan.

A report from CNN this week claimed that the withdrawal, which Biden said would take place by Sept. 11, could be wrapped up in a manner of days.

Biden was asked about that report Friday and said it was false, but added, “We’re on track exactly as to where we expected to be. But we just — I wanted to make sure there was enough, quote, “running room” that we could get — wouldn’t be able to do it all until September.  There will still be some forces left.  But it’s a rational drawdown with our allies, and it’s making — so there’s nothing unusual about it,” according to an official White House transcript of his comments.

Biden was then asked if he worried the Afghan government might be toppled without U.S. troops to prop it up.

“Look, we were in that war for 20 years. Twenty years. And I think — I met with the Afghan government here in the White House, in the Oval. I think they have the capacity to be able to sustain the government. There are going to have to be, down the road, more negotiations, I suspect. But I am — I am concerned that they deal with the internal issues that they have to be able to generate the kind of support they need nationwide to maintain the government,” he said.

Then came the question that snapped his patience.

“A follow on that thought on Afghanistan,” the reporter began.

“I want to talk about happy things, man,” Biden responded.

After the next Afghanistan-related question, Biden told the media, “I’m not going to answer any more quick question on Afghanistan.”

“Look, it’s Fourth of July,” Biden said. “I’m concerned that you guys are asking me questions that I’ll answer next week. But I’m — this is a holiday weekend. I’m going to celebrate it. There is great things happening.”

Biden later said he would answer “all your negative questions — not negative — your legitimate questions.”

When Psaki held her media briefing, she said Biden’s comments were not “related to Afghanistan,” according to the Washington Examiner.

“What he was trying to convey is that he is heading into July 4 weekend, a weekend for family, a weekend to celebrate America,” she said. “He was ready to be done answering questions.”

“People are a little over-reading into [Biden’s] response to a series of Q&A leading into a holiday weekend when he had already answered three questions on Afghanistan.” pic.twitter.com/YCYFXSiZJX

Psaki later defended Biden by saying that “people are a little overreading into his response to a Q&A leading into a holiday weekend.”

“He had already answered three questions on Afghanistan, and he just said this is the fourth question. And he then went on and answered a couple additional questions,” she said.

“The president could not be more proud of the men and women serving, who have served over the last 20 years, and he is going to use every opportunity he can to thank them for their service, thank the families of those fallen service members who served proudly and bravely in Afghanistan.”

US Has Lost Control of Border, Biden Facilitating Entry of Thousands of Illegals