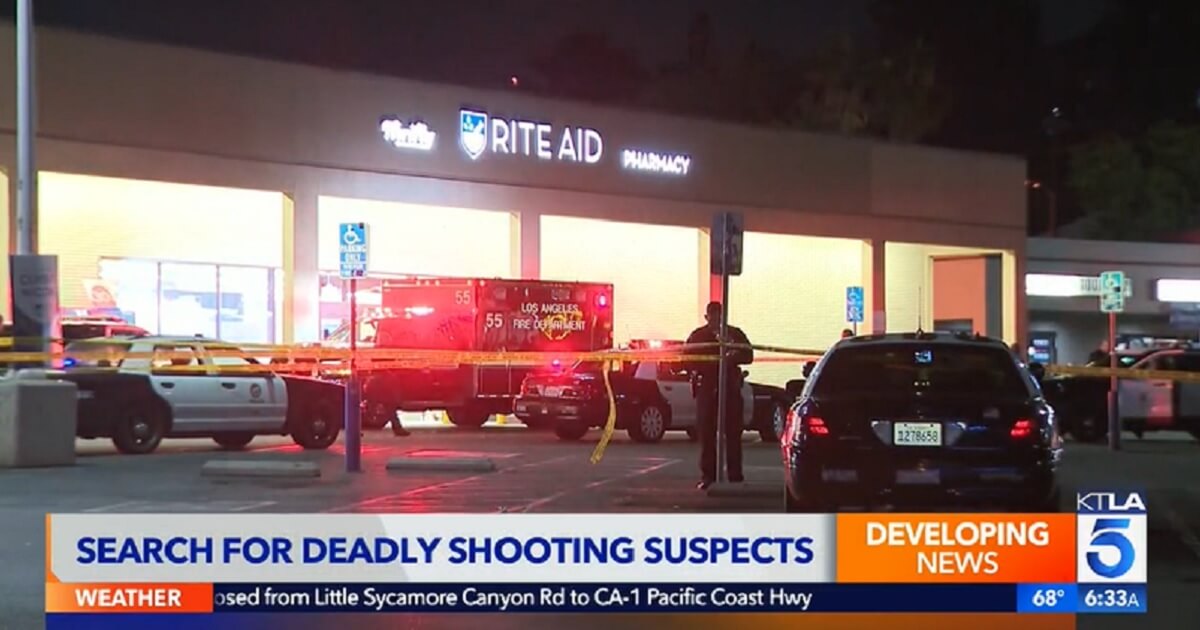 According to KTLA-TV, a Rite Aid employee working at a store in the city’s Glassell Park neighborhood confronted two shoplifters Thursday night.

When the employee tried to stop the men from leaving the store with two cases of beer they hadn’t paid for, one of the men fired a weapon, KTLA reported.

The shooting occurred about 8:45 p.m.

The Los Angeles Police Department said the Rite Aid employee was dead at the scene, and the two men had left the area on foot, Fox reported. The employee was later identified by police as Miguel Penaloza, 36, of Los Angeles.

On Saturday, the LAPD released images of the two suspects from the shooting, KTLA reported.

Los Angeles police have released images of two men suspected in the fatal shooting of a Rite Aid employee this week in Glassell Parkhttps://t.co/nkx21lON96

The KTLA report from Saturday is below:

The LAPD is requesting the public’s help in identifying these two men.

California criminals have become further emboldened in their illegal activity as of late.

This includes video of several suspects leaving a Nieman Marcus store with their arms full of stolen purses, as well as a man placing items into a large bag before leaving a Walgreens pharmacy.

Cell phone video taken inside a #SanFrancisco Walgreens shows a man packing a garbage bag full of items while multiple people, including security filmed from feet away. Video shows him riding right past them on his bike down the aisle and out the door. https://t.co/llBFeD1cjp pic.twitter.com/9BwSHuTVII

SFPD confirms this shoplifting incident at Neiman Marcus in Union Square at about 5:49 pm.

A man I spoke w/tonite says his wife works in area, saw it happen & sent me this video which is circulating online.

Handbags at Palo Alto NM were also stolen in a similar fashion in May pic.twitter.com/KOSY8sbaGO

San Francisco leaders have pushed back against the negative attention by citing the city’s midyear public safety report, according to CBS News.

The article states that even though homicides and aggravated assaults have increased this year, the overall property and violent crimes decreased.

Yet, it seems that San Francisco is not the only city having these issues in the Golden State.

According to the National Retail Federation‘s annual survey from 2020, Los Angeles was #1 on its list of cities affected by organized retail crime, with San Francisco at #4 and Sacramento at #10.

In a time when many police departments, including San Francisco’s, are short-staffed and under-funded, the latest surge in property crime gives the message to criminals that police forces are simply not coming to stop them.

Pair that with California’s gun control laws at the state and local level, which have only served to erode the Second Amendment rights of the state’s law-abiding citizens, and it appears there may be little to stop these criminals from becoming more emboldened — and possibly murderous — in their criminal acts.