Hundreds of Immigrants Amass at Texas Border Wall, Attempt to Force Their Way Through Gate 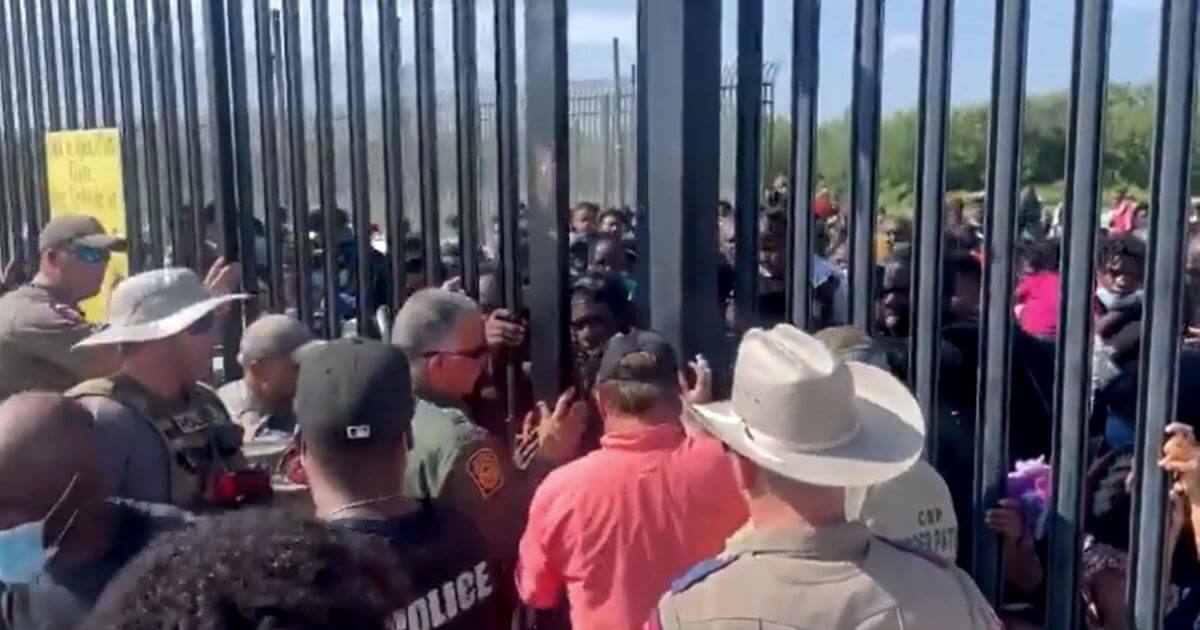 A video posted Monday by Fox News national correspondent Bill Melugin shows a group of more than 300 migrants trying to enter the United States through a gate in Del Rio, Texas.

The migrants, a significant portion of them from Haiti, were crowding near the gate as law enforcement officers from Nebraska, Texas and Florida stood guard along with the Border Patrol, according to reporting and images from Melugin.

Some migrant families from among the crowd were let through the gates into the country, Melugin reported. Some of the adult men tried to break through the gate by attempting to overwhelm the law enforcement officers there, only to have officers shout at them and ask them to go back, the video shows.

“It’s unclear what’s going to happen with this group,” Melugin said in a tweet. “Troopers tell me Border Patrol is completely overrun and their processing centers are all over capacity & they can’t handle a group this size. Concerns the group may have to wait in the blistering heat.”

NEW: Getting a bit hectic here in Del Rio. Massive group of 300+ migrants wants to be let into the US. Some migrant families being let through, but adult men try to force their way through the gate. BP and troopers have to yell at them to get back. @FoxNews pic.twitter.com/7E4KIHmNVs

He later reported, “Almost all ended up being let into the US.”

Another video from earlier. A Border Patrol agent told me this was the biggest single group he’s ever seen in Del Rio & that they’re glad troopers from Florida & Nebraska were here to help man the gate with Texas troopers. Almost all ended up being let into the US. @FoxNews pic.twitter.com/kwRAaAxofq

Law enforcement officers at the border have taken 1,277,722 enforcement actions as of June this fiscal year, according to information released Friday by Customs and Border Protection. Last month saw a 5 percent increase from the already high numbers of attempted illegal entries into the U.S. in May, the CBP reported.

“A larger-than-usual” number of migrants have attempted several illegal entries, according to the agency.

“We are in the hottest part of the summer, and we are seeing a high number of distress calls to CBP from migrants abandoned in treacherous terrain by smugglers with no regard for human life,” acting CBP Commissioner Troy Miller said in a statement.

“Although CBP does everything it can to locate and rescue individuals who are lost or distressed, the bottom line is this: the terrain along the border is extreme, the summer heat is severe, and the miles of desert migrants must hike after crossing the border in many areas are unforgiving.”

Del Rio, where the crowd had gathered Monday, is one of several cities along the southwestern border that have seen spikes of illegal entrants trying to break through the U.S.-Mexico border nearby at different periods during the Biden administration’s ongoing border crisis.

So frustrating was the official response to the problem from the federal government that Democrat Del Rio Mayor Bruno Lozano in May openly complained that the administration was downplaying the crisis and not doing enough to address the situation.

Earlier this month, a group of Immigration and Customs Enforcement agents and sheriffs filed a lawsuit against the Biden administration for allegedly tossing roadblocks in the way of their fulfilling their duties of keeping the nation’s borders safe from unauthorized entry.

On top of the current situation at the border are worries that political shifts in Cuba and Haiti might result in a surge in migrants trying to enter the U.S. both at sea and by land.

The Washington Free Beacon reported Friday that the Biden administration had asked immigration officials to prepare for “hundreds of thousands of migrant families and asylum claims” as it moves to end Title 42, a provision that allows the U.S. to turn away illegal immigrants due to the risk of their spreading COVID-19.

“All of these people will become permanent residents. There’s no political will from the Biden administration to deport families once they’re already admitted. The White House knows that.

“The end of Title 42 will result in de facto open borders.”

Reporter Looks Around Pro-Police Rally, Has 'Surreal' Moment When He Sees 200 Black Families