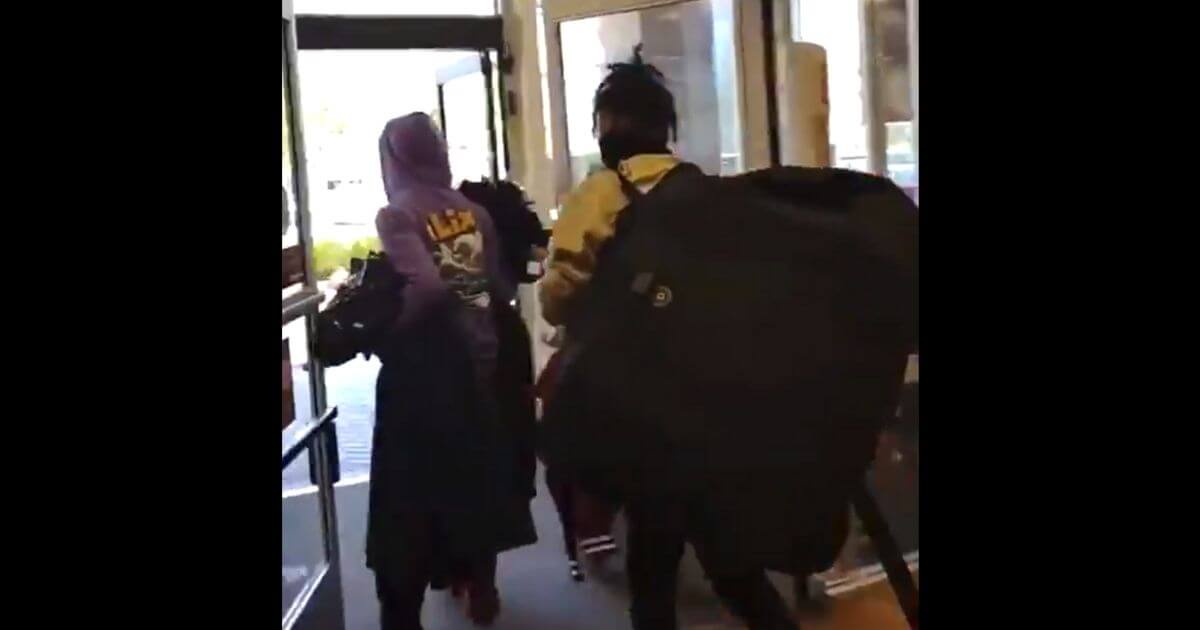 California, which was once a celebrated tourist destination, has deteriorated into a crime-infested mecca for shoplifters, thanks to the destructive policies of Democratic Gov. Gavin Newsom.

On Monday, two thieves brazenly walked out of a TJ Maxx store in the suburb of Granada Hills carrying handfuls of stolen goods, including an oversized duffle bag filled with loot.

What was striking was the thieves’ demeanor: They calmly walked out of the store without rushing or nervously looking around.

Podcast host Adam Carolla shared the video on Twitter, saying, “Thanks to Prop 47 thefts under $950 will not be prosecuted, so cops will not bother showing up. Just a reminder that you get what you voted for, California!”

Thanks to Prop 47 thefts under $950 will not be prosecuted, so cops will not bother showing up. Just a reminder that you get what you voted for, California! pic.twitter.com/jWUPdJzy0A

Proposition 47 was an omnibus criminal justice measure ironically named the “Safe Neighborhoods and Schools Act.” Among other things, it reclassified thefts under $950 from felonies to misdemeanors in most cases.

The law resulted in incidents like the one Monday.

“They didn’t even run out, they walked out,” Los Angeles Police Department Sgt. Jerretta Sandoz told KCAL-TV on Tuesday.

Sandoz said she was not surprised that criminals have become increasingly emboldened thanks to Prop 47.

The 2014 law — combined with the police pullbacks fueled by the left’s “defund the police” frenzy — has spawned rampant lawlessness across California, she said.

Sandoz said repeated non-enforcement of the law by police has emboldened crooks by “sending a message that we, the criminals, are winning.”

#UPDATE The search is on for this suspect after he randomly beats a woman at a gas station in Gardena.
Happened Saturday night at 7 PM.
Detectives hoping his distinctive size, 300-350 lbs, will help track him down.
The suspect brutally beats the woman & then calmly walks away. pic.twitter.com/dGqMuKRveq

Not surprisingly, no arrests have been made in the TJ Maxx heist, even though the suspects’ faces were visible in the viral video shot by a bystander.

Theoretically, thefts under $950 are still being prosecuted as misdemeanors. But in reality, they’re not, said Sandoz, who’s also the vice president of the Los Angeles Police Protective League.

“If they’re caught, they’re probably given the equivalent of a traffic ticket,” she told KCAL. “So it’s not taken seriously.”

As a result, there has been a catastrophic uptick in brazen burglaries of department stores and local drugstores.

Two weeks ago, a group of thugs ransacked a Neiman Marcus store in San Francisco.

According to Doris Lim, an anchor with KGO-TV, a similar burglary occurred in May at another Nieman Marcus location in the tony suburb of Palo Alto.

Police said more than $150,000 in handbags were stolen in the coordinated theft at the Stanford Shopping Center, KNTV-TV reported.

SFPD confirms this shoplifting incident at Neiman Marcus in Union Square at about 5:49 pm.

A man I spoke w/tonite says his wife works in area, saw it happen & sent me this video which is circulating online.

Handbags at Palo Alto NM were also stolen in a similar fashion in May pic.twitter.com/KOSY8sbaGO

In another California burglary, hoodlums were filmed fighting each other over their stolen loot outside a mall in suburban Walnut Creek on May 30, KGO-TV reported.

WILD VIDEO: Here’s video of #looters in Walnut Creek turning on each other and start fighting over the clothes they stole. Latest here: https://t.co/HIdv2szDh2 pic.twitter.com/2n9xXNZ6FV

Last month, a thief plundered a Walgreens store in San Francisco as a security guard and another employee stood by and watched helplessly.

This just happened at the @Walgreens on Gough & Fell Streets in San Francisco. #NoConsequences @chesaboudin pic.twitter.com/uSbnTQQk4J

The left’s demonization of police is directly responsible for the rampant lawlessness metastasizing in Democrat-run cities across the country.

If this trend continues, it’s only a matter of time before the United States devolves into a third-world hellhole.

Take South Africa, for example. Looting, rioting and violent crimes are now commonplace because of police pullbacks fueled by that country’s own version of critical race theory.

This is where the U.S. is heading, thanks to the left’s soft-on-crime policies that endanger the safety of all Americans.

South Africa is being left for waste. Businesses, shops, warehouses, and homes, are all targets for looting and burning.

South African author Rian Malan — a white journalist who fought against apartheid — warned that the U.S. will soon tumble into the same anarchy and poverty that afflicts his homeland if it continues to bend the knee to left-wing mobs.

He said the devolution began when South Africa replaced meritocracy with affirmative action and repeatedly bent over backward to appease its majority black population.

“It is exactly these values that have brought South Africa to its knees,” Malan wrote. “We created a society where nothing was expected of blacks save ‘blackness.’

“Honor and diligence were not demanded of government appointees. Sloth was tolerated. Failures and corruption went unpunished.”

He added: “Blind pursuit of equity began to achieve its opposite: a staggering equality gap among blacks themselves, with a fortunate few benefitting hugely and the masses sinking into abject misery.”

JUST IN – Every single store in the Jabulani Mall near Johannesburg has been looted. Reports and videos of riots at more malls in parts of South Africa.pic.twitter.com/t5DL96EVIM

Malan said South African corporations afflicted with destructive white guilt paid reparations to black people by ceding “large ownership stakes to black partners, whether or not they brought anything to the table besides black skin.”

He continued: “Firms were also required to meet racial quotas in hiring and ensure that management was racially representative, meaning roughly 88 percent black. Tendering for government business became increasingly pointless, because contracts were invariably awarded to black-owned firms, even if their prices were double, triple or tenfold.”

This eradication of standards in the name of achieving “equity” destroyed South Africa’s economy and led to the total breakdown of society, Malan said.

“Investment dried up. Brains drained,” he wrote. “The economy stagnated, causing unemployment to surge to 11.4 million today, from 3.3 million in 1994.

“The upshot: utter misery for the underclass, doomed to sit in tin shacks, half-starved, watching the black elite grow fat on the pickings of equity laws and rampant corruption.”

South Africa’s tragic descent should serve as a sobering wakeup call to America about the existential dangers of caving to toxic wokeness.